Israel's 'campaign between the wars' with Iran

The latest capture of a vessel carrying weapons en route to the Gaza Strip reveals Israel's ongoing battle against Iranian attempts to gain a military foothold in the region — while nuclear negotiations follow their course. 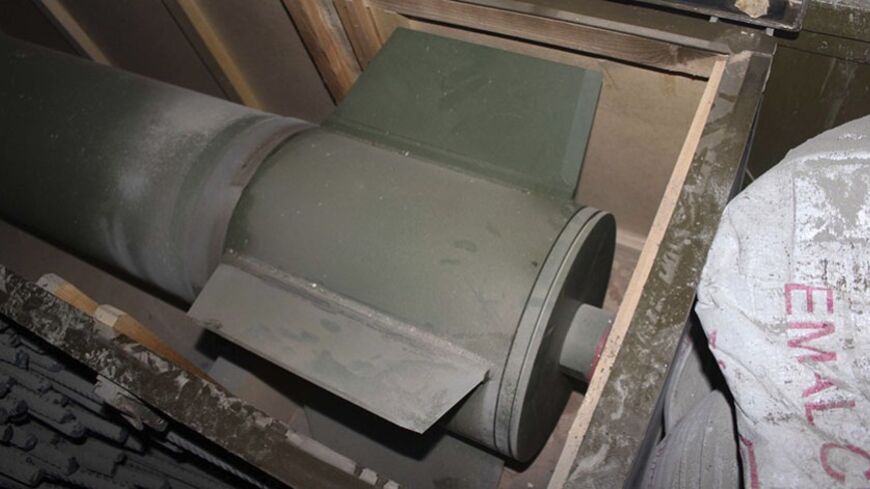 A rocket is seen on a ship seized by the Israeli navy in the Red Sea in this handout picture released by the Israel Defence Forces (IDF), March 5, 2014. - REUTERS/IDF/Handout via Reuters

The most intriguing question that arises after the March 5 interception of the arms vessel Klos-C by the Israeli navy in the Red Sea is whether Iran’s president, Hassan Rouhani, was aware of this smuggling operation and whether it was planned and authorized with his consent.

Over the past day, senior intelligence officials from the Israel Defense Forces (IDF) were inclined to believe that Rouhani was not involved in the affair, becoming aware of it following the statement by the IDF spokesman on March 5. If this was indeed how the affair transpired, what we were seeing here is another episode in the political drama unfolding right now in Iran. This is a struggle between Iran of the ayatollahs and the Islamic Revolution and Iran as it would like to be seen in the future, namely a reformist country that’s yearning for international recognition, a Western embrace and acceptance by the family of nations. This Iran could be termed “Rouhani’s Iran,” but even that is not entirely certain. After all, Rouhani himself is counted among the masterminds of Iran’s nuclear program and its built-in subterfuges. What Israel calls this Iran is an Iran as Rouhani’s voters and followers would have liked to see.

When a very senior Israeli defense establishment official told me a few weeks ago that “something dramatic was afoot in Iran,” this was precisely what he was alluding to, to wit: the struggle between generations, approaches and doctrines. This week, the reformist Iran, the one which winks at the West, sustained quite a blow from IDF intelligence and naval forces when it was caught ''red-handed'' pouring gasoline onto the Middle East bonfire, while still putting on an act of the brotherly and peace-seeking country that only wants to coast along peacefully.

Iran’s reaction to the military operation and the intelligence exposure was typical. This was another Zionist hallucination, Iranian spokespersons alleged. However, behind the scenes and inside the back rooms, Iran — and more specifically the Islamic Revolutionary Guard Corps and Quds Force — is frantically abuzz. It realizes that someone — in his holy of holies — singled out the containers in which M-302 rockets were stashed. Originally, they had been taken from the arsenals of the Syrian army, flown from Damascus to Tehran, transported in trucks to the port of Bandar Abbas and loaded onto an innocuous-looking Panamanian cargo ship amid cement-laden containers. From there it sailed, as a decoy, to Iraq, where an additional 50 containers of cement were loaded. Then they set sail for their last leg, which was to take them to Port Sudan (and from there to the terrorist organizations in Gaza or Sinai). Instead, on March 8, they will reach their final destination at the southern Israeli port of Eilat.

On the night between Tuesday and Wednesday of this week (March 4-5), the Israeli navy encircled the vessel. Dozens of commandos from the elite Shayetet 13 unit raided and commandeered the ship without a fight, altering its course from Port Sudan to Eilat. The Israeli troops were backed by two missile boats, auxiliary ships and quite a few Israeli air force planes and unmanned aerial vehicles. The convoy then proceeded toward Israel’s territorial waters with no regional force posing a threat to it.

Israeli Prime Minister Benjamin Netanyahu, who was on a widely-covered visit to the United States, received all this information one day too late. Had the raid taken place a day earlier, he would have brought the house down in front of the 14,000 AIPAC delegates who were listening to his address that Tuesday. Later in the week, Netanyahu did his utmost to leverage the incident. However, the American media was far too busy with the events in Ukraine and the arm-twisting between US President Barack Obama and Russian President Vladimir Putin. Iran’s Supreme Leader Ayatollah Ali Khamenei can wait.

“Not a single day goes by,” a senior IDF intelligence officer told me this week, “in which the Iranians are not trying to smuggle munitions, rockets, missiles or explosives to the terrorist organizations in the region. This is their primary mission every day, all day. I believe that their attempts to smuggle weapons by sea will wane over the next few months. There are other routes. What we are seeing here are mind games. Both sides are being creative. I’m pretty sure that the Iranians are asking themselves how Israel was able to track down the missile shipment from the get-go and how it was able to monitor and obtain such detailed information on its whereabouts.”

The Iranians have a very simple motive. What they are trying to do is to set up as many launch bases as possible close to Israel, with hundreds or thousands of rockets ready to be fired on D-Day. What is more important than stockpiling the rockets is instilling a sense of commitment.

Back in the day, Palestinian Authority Chairman Yasser Arafat created a pact with the Revolutionary Guard which promised to dispatch a ship with 50 tons of explosives, Katyusha rockets and other munitions during the second intifada in 2002. In exchange for these munitions, Arafat promised the Revolutionary Guard would gain a foothold in the Palestinian towns in the West Bank and the Gaza Strip. Israel intercepted the explosive-laden vessel Karine A, as a result of which Arafat lost his international legitimacy, experiencing total isolation in the Muqata in Ramallah.

Arafat has long been gone, yet the struggle continues. Israel talks about a “deal” between the Revolutionary Guard and Al-Quds and the terrorist organizations in the south, such as the Islamic Jihad, jihadist terrorists in Sinai and sometimes Hamas, too. The underlying principle is that Iran supplies the rockets, yet some of them will be kept for a time of need, namely when Iran gives the order to have them fired at Israel. And that “time of need” is a possible Israeli strike against Iran’s nuclear installations.

The M-302 rockets that were shipped onboard the Klos-C this week to Port Sudan are reportedly able to overcome the capabilities of Israel’s Iron Dome missile interception system which, according to foreign sources, is not designed to handle this type of rocket. Israel is currently developing a medium-range rocket interception system — Magic Wand. However, it will become operational only in two or three years’ time. It is into this vacuum that Iran tries to step in with the aim of upsetting Israel’s ability to defend its population centers, thus creating a balance of terror vis-a-vis the “Zionist entity.” This week, its plan went awry.

Will the interception of the arms vessel have a strategic impact on the West’s negotiations with Iran over the nuclear issue? Israel, among others, does not believe that it will. “The West,” says a very senior Israeli defense official, “is caught up in its own concept. Nobody wants war. Nobody is willing to take any risk or make a credible threat with a military option. Everyone prefers to play in this charade, stall for time and freeze the status quo, at least until the end of Obama’s presidency.”

Meanwhile, the CBW — the campaign between wars, as Israel’s defense establishment calls it — continues. This is namely the never-ending battle of Israel’s top-notch intelligence and the IDF’s long offensive arm against the Iranian octopus, which keeps extending its tentacles in every direction to build a rocket noose around Israel’s neck. This is an unremitting campaign. Sometimes it reaches the media, but more often than not it remains covert.