Prime Minister Benjamin Netanyahu's media campaign over the capture of the weapons shipment passed unnoticed by the foreign press, but reinforced his status in Israeli public opinion as "Mr. Security." 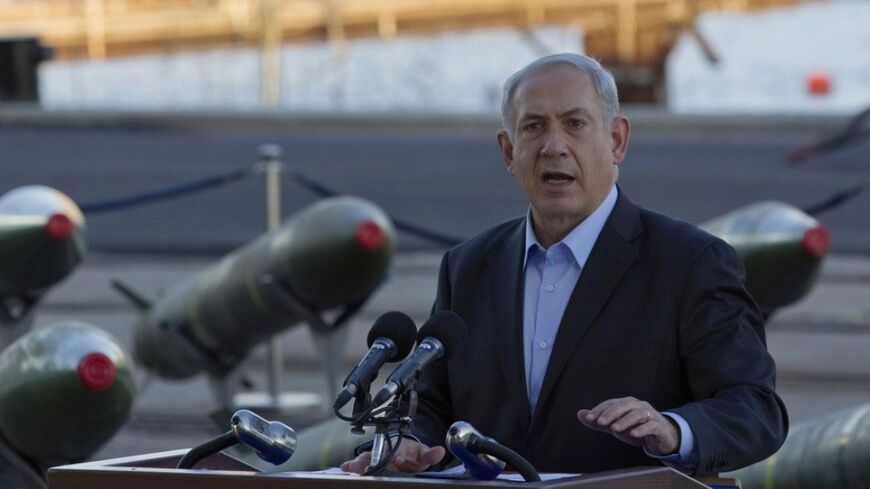 Israel's Prime Minister Benjamin Netanyahu speaks to the media in front of a display of M-302 rockets, found aboard the Klos-C ship, at a navy base in the Red Sea resort city of Eilat, March 10, 2014. - REUTERS/Amir Cohen

The Prime Minister’s Office was disappointed this week. It had learned that even after flying dozens of foreign journalists to Eilat on March 10, in a rented aircraft, the international media still wasn’t impressed by the capture of the Iranian arms ship Klos-C. The incident received only minor coverage in the US and Europe’s main media outlets, even after the booty display presented by the prime minister himself before the cameras, with an Israel flag and Iranian missiles behind him. Nor were they impressed by his ominous statement that Iran would be, in the future, smuggling nuclear suitcases as well.

Israel hoped that the seizure of the Klos-C will harm Iranian legitimacy, just as the seizure of the Karine A ship in 2002 was damaging to late Palestinian Chairman Yasser Arafat. That didn’t happen. Nevertheless, it would be a mistake to deem this media campaign as a public diplomacy failure, like other failures that Israelis have gotten used to over the past few years. In this particular case, the chances of the Iranian vessel becoming a hot item in the international media were small from the very outset. Nor does the labor strike by the Foreign Ministry’s staff have anything to do with the meager results of this campaign, despite what the staffers say. International coverage would still be sparse, even if the Israeli spokesmen would have been interviewed in Spanish, French and Italian.

The reason for the disappointing coverage is, first and foremost, the deterioration of Israel’s legitimacy around the world on the backdrop of the ongoing occupation of the Palestinian territories and the dead end in the diplomatic negotiations. Compounding this is the Western nations’ conciliatory approach to Iran, as expressed in the Geneva agreement, and of course, the crisis in Ukraine, which has taken over the international agenda and diverted the West’s attention from the Middle East.

Netanyahu was ultimately a victim of these circumstances, though some of them he has instigated himself over the past few years. Damage to Israel’s legitimacy in various international institutions emerged as a result of his avoidance of any negotiations with the Palestinians during his entire second term as prime minister, from 2009 to 2013.

During those years, the world became accustomed to hearing the rhetoric of intimidation from the Israeli prime minister on all matters relating to a nuclearizing Iran and his warnings of a “second Holocaust.” When he displayed the Iranian-made M-302 missiles hidden on the ship to the rest of the world and announced that they were intended to threaten Israel’s major cities, no one was in any hurry to listen to him.

Over the past few days, there has been considerable criticism, in speech and in writing, of Netanyahu’s excessive campaign to expose the phony smiles of the Iranian regime. This criticism per se is correct. Netanyahu should have left the campaign to the chief of staff or the navy commander, since the effect of uniformed military officers exposing the Iranian deception would have been much more forceful and credible. Instead, we received the prime minister, whose enthusiasm over the operation could almost be described as puerile, gloating over his own admonishment over the blindness of Europe and of the whole world about Tehran's true intentions.

As ridiculous as Netanyahu posting his “selfie” from Eilat with the navy fighters to his Facebook page may have been, here too, the Israeli prime minister has reason to be proud and pleased with himself. First of all, the forcefulness of this event lies in the proof that it brought before the rest of the world. Apart from the image aspect, Israel provided unequivocal proof that Iran was providing advanced weaponry to the Gaza Strip and was therefore involved in terrorism. Assuming that Iran doesn’t change direction and further evidence accumulates, the capture of the Klos-C will be a milestone in exposing the true face of the Iranian regime, if not now, then at some point in the future.

If events of this sort reach a critical mass, Netanyahu’s case will only get stronger, and the United States and Europe will be hard pressed to ignore it. Netanyahu may have laid the foundations for a public diplomacy campaign that could change the current way that the West relates to the “new” Iran under Rouhani.

At the same time, Netanyahu was also well-served in Israel public opinion this week, and certainly among right-wing voters. A security accomplishment such as this only strengthens Netanyahu’s unique position when considering the requested criteria for premiership. That is yet another reason why he bothered to make his way down to Eilat, taking over the show before the press. He didn’t want to leave the stage to his popular defense minister.

Netanyahu is well-aware that according to any survey or public opinion poll commissioned by him, his strong suit among the Israeli public is his security agenda. Netanyahu was completely in his element in the photo of him with the soldiers in Eilat and his statements and warnings in fluent English, with the Iranian missiles serving as a backdrop. Netanyahu needs this as long as the negotiations with the Palestinians continue to go nowhere and US President Barack Obama demonstrates impatience with him. In such a case, he will always have the Israeli public to demonstrate its satisfaction with his firm positions, his leadership and his commitment to defend Israel’s security interests.

While newspapers in the United States and Europe may not have been interested in the Klos-C, the Israeli media was packed with reports, commentary and photos of the arms ship and Eilat. Regardless of how it appears on the outside, any disappointment felt by Netanyahu and his people over the lack of international interest in the episode is limited and has no impact on his otherwise excellent mood these days.