Israel fears it has lost world attention on Iran 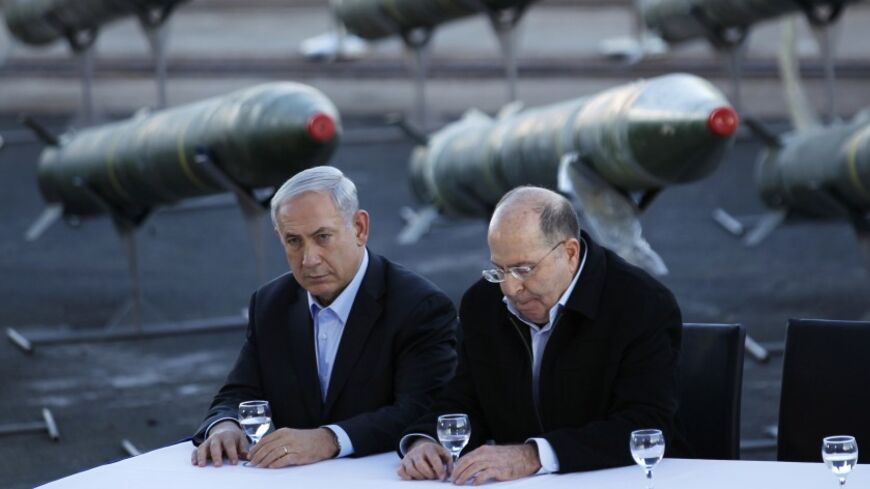 Israel's Prime Minister Benjamin Netanyahu (L) and Defense Minister Moshe Ya'alon sit in front of a display of M-302 rockets, found aboard the Klos-C ship, at a navy base in the Red Sea resort city of Eilat, March 10, 2014. - REUTERS/Amir Cohen

Broadcast in prime time at 8 p.m. on its commercial television networks, Israel’s main newscasts, around which all Israelis are huddled, had the following lineup on March 10: Broad coverage of the event at the port of Eilat, where the Israel Defense Forces (IDF) presented Prime Minister Benjamin Netanyahu and Defense Minister Moshe (Bogie) Ya’alon with the weaponry seized on the Klos-C vessel, which had been intercepted shortly before by the Israeli navy in the Red Sea, en route to Port Sudan. Carrying a cargo of dozens of heavy M-302 rockets, the ship also transported heavy mortar shells and other munitions which were intended for terrorist organizations in Sinai.

Both the prime minister and defense minister addressed the audience that attended the event. “There are those,” Netanyahu said, “who would prefer that we not hold this event. Nor would they want us to show to the world what is truly happening inside Iran. It’s hard for them that we unveil the truth behind Iran’s fake smiles. … The original bill of lading and the forged bill of lading that are presented here prove how Iran tried to disguise the loading of the munitions containers in its territory.” According to Netanyahu, this was corroborated by testimony from the ship’s crew, who related that the containers had been loaded in Iran’s main port of Bandar Abbas. That the international community ignores this, Netanyahu added, is another indication of the era of hypocrisy in which we live.

Ya’alon provided some more details: “This is another example of the fact that the Iranian regime is essentially the largest exporter of terrorism in the world.” According to him, there is not a single conflict in the Middle East that is not fueled by this regime, be it with weapons, ammunition, money or terrorist know-how. This spreads from Afghanistan to Bahrain, Yemen, Syria, Lebanon and in this case the Gaza Strip. But this kind of activity is not restricted just to the Middle East, the Israeli defense minister qualified himself. We see merchant ships being exploited amid flagrant violation of international law to transfer missiles that would have ultimately been fired at Israeli cities. Moreover, this regime also uses diplomatic channels to transfer explosives to its embassies in Asia, South America, regardless of Israel. This is the face of Iran’s regime that underlies its charm offensive.

The prime minister and defense minister’s admonitory tone stems from deep frustration. Netanyahu and Ya’alon know that they have lost the West’s attention. They know that US President Barack Obama is not lending an ear to this news and that the Europeans are rather indifferent, too.

“Look at the difference between how Syria and Iran are being handled and the way the crisis in Ukraine is being addressed,” a high-ranking Israeli official told me this week after returning from a series of meetings in Washington. “After all, the United States does not have an existential interest in Crimea. Yet, when it comes to Russia, the Americans behave in a totally different way. Generations of Americans were brought up to hate and fear Soviet Russia. The Cold War still runs through their veins. In spite of all, the ultimate demon is the Russian threat from the east. That’s why Obama can afford to almost completely ignore the crisis in Syria, demonstrate conspicuous weakness vis-a-vis Iran and ‘lead from behind’ in Libya. Yet, when it comes to Russia and Ukraine, he suddenly takes charge.”

Two other items relating to Iran were aired during the March 10 Israeli newscasts. One of them was about an Israeli citizen, from the small town of Kochav Yair, who was arrested on suspicion of having tried to sell professional, power paragliders to an Iranian citizen. Able to stay aloft for an extended period of time, these paragliders have great precision, allowing pilots to carry an additional payload weighing several dozen kilograms. Another news item related that an Iranian citizen in Thailand bought the tickets for the two passengers who boarded the Malaysian airliner (using stolen passports) that went missing on March 8, over the South China Sea. These two items contain broad hints as to Iran’s other possible implication in international terrorism.

Most of Israel’s media outlets enjoy freedom of the press. The government cannot dictate to them what to write or what to publish. Barring a few ''stately'' enclaves in the public broadcasting and one freebie newspaper, which is published by an associate of the prime minister, Israel’s media is very critical of its premier. Kicking him around, at times even violently and brutally, Israel’s media has given the prime minister a hard time throughout his term. The above reports about Iran were published without any pressure being wielded on local media outlets, which operate purely on the basis of journalistic and professional standards.

The problem, however, is that the Israeli media stands all alone in this campaign. The event in Eilat was planned and orchestrated for the foreign media, which was pretty much absent, sending over just a few junior reporters. Israel had hoped to launch a deadly counteroffensive that would have ripped the mask off Iran’s true face. However, it discovered a world that yawns at seeing the dozens of rockets laid out on the pier in Eilat, not quite enthusiastic about Netanyahu and Ya’alon’s speeches.

Maybe it’s a question of dosage. In his usual manner, maybe Netanyahu went for overkill rather than for understatement. Yet, it’s possible that at this time the world is ready to listen only to its own tales about Iran, tossing aside anything that does not conform to its thesis about Iran’s “charm offensive.” As usual, the truth lies somewhere in between.

Israel’s intelligence agencies also talk about a major drama unfolding in Iran, between two dichotomous and colliding approaches in the land of the ayatollahs. The approach of President Hassan Rouhani, who is really trying to forge new paths to the West and willing to pay a price for that, is juxtaposed against that of the Supreme Leader Ayatollah Ali Khamenei. The latter remains the same tiger in lion’s clothing. The West is his sworn enemy. The United States is the Great Satan, Israel is the Little Satan, and anything goes in fighting them and everything they stand for.

The up-to-date estimate by Israel’s intelligence is that Rouhani was unaware of the shipment of the deadly rockets from Iran to Gaza on the Klos-C. He and his officials were reportedly incensed by the exposure of the smuggling operation amid Iran’s colossal efforts to restore its legitimacy and have this pariah state rejoin the family of nations. The seaborne operation was ascribed to the Quds Force of the Revolutionary Guards. The order came directly from Khamenei. The Revolutionary Guards’ chief operations officer, Gen. Qasem Soleimani, whom Israel and the West’s intelligence agencies view as the Iranian regime’s “true Great Satan,” was in charge of its execution.

The Mossad and the IDF’s Intelligence Directorate have a voluminous and impressive dossier on Soleimani. Said to be the source of all evil, he is considered to be the long arm of Khamenei, the follower of Ruhollah Khomeini — the father of all ayatollahs. Khamenei sees the country’s acquisition of nuclear capability to be a paramount, sacred objective. To this end, he is willing to sell its resources, image and energy.

The ayatollahs, according to various intelligence assessments, have long lost the Iranian people, who are fed up with isolation, a declining, crumbling standard of living, a tumbling currency and rampant inflation. Iranian youths, who were not born when the revolution banished the shah from Tehran, want to wear jeans, listen to music, enjoy freedom and have uncensored Internet access. That’s why Khamenei and his people realized that they needed to install a pressure-relief valve that would give hope, however temporary, to the masses, thus assisting the ayatollahs in their last stretch toward acquiring a nuclear bomb. And then, once they have a bomb, let’s see who would dare have them deposed.

And that valve is called Hassan Rouhani. The fateful question is whether this valve can declare independence and take over this whole pressure cooker. Will the valve be enough to release the pressure and keep the Iranian revolution going for a few more years? Will the world continue to see just the valve while ignoring everything that’s bubbling underneath?

At this time, Israel is a lone voice crying in the wilderness. The world is charmed by Rouhani. Catherine Ashton, EU high representative for foreign affairs and security policy, wearing a headscarf, also dashed to Tehran. “This is a missed historic opportunity,” says Ya’alon in closed forums. “We’re still hoping that the West will come around.”

It is only over the next few years that we will find out to what extent this hope is disconnected from reality.