Israeli Defense Minister Moshe Ya'alon warns of Iranian aspirations for regional hegemony, claiming that the West did not present tough enough negotiation stances: ''Current discussions would result in an agreement that isn’t a good one.'' 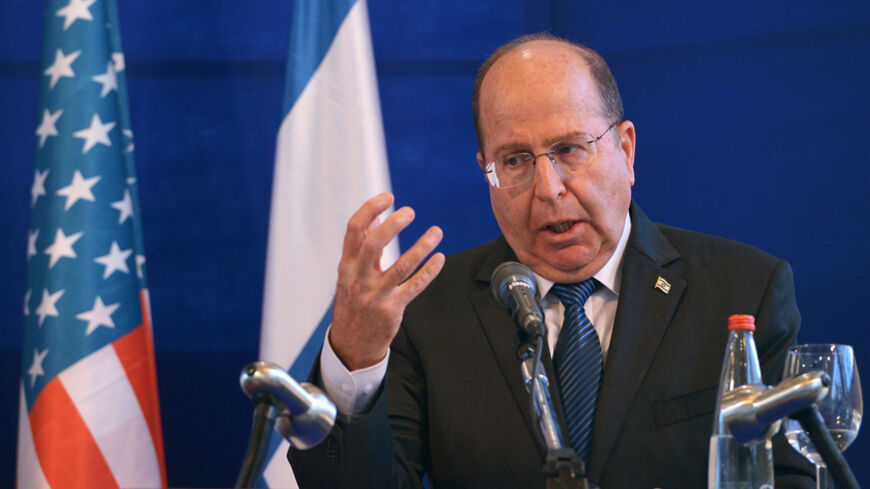 Moshe "Bogie" Ya’alon is pleased with what he calls “the awakening of the West with regard to the danger of the Islamic State [IS].”

In interviews with Israeli news outlets during Sukkot (Oct. 14), the Israeli defense minister explained: “The very fact that Western countries are waking up is important, because the Islamic State is a threat not just to our region. The West — Europe and the United States — is experiencing this threat exactly the way we do. Fighters leave Europe to fight in Syria and Iraq. Then they go back home as trained terrorists. This leads to terror attacks such as the one at the Jewish Museum in Brussels [May 24]."

Ya'alon added, "Right now there are two coalitions on the offensive — one in Iraq and another in Syria. The coalition in Iraq is a Western one, led by the United States with the participation of other countries such as the Netherlands, Canada, Australia and the UK. The other coalition, operating in Syria, is an Arab one, and is also led by the United States. Its participants include, among others, Saudi Arabia, the United Arab Emirates, Jordan and Qatar. As for the latter, I don’t know whether it is actively taking part in the offensive, but it is nonetheless part of the coalition.

"Airstrikes are important, because as long as the Syrians or Iraqis did not have air supremacy, those convoys, which consisted of pickup trucks mounted with machine guns and Kalashnikovs, as well as looted tanks, simply advanced uninterruptedly, in broad daylight. Nobody was stopping them. This phenomenon has been blocked.

"They continue to fight in the urban areas, such as Kobani. There, too, the airstrikes help the ground forces. We saw how the Kurds in Iraq, with air assistance from the coalition forces, returned to conquer areas seized by the Islamic State. However, having forces on the ground is also needed. This job cannot be accomplished just by airstrikes. I hope the Iraqi military will be able to do that. And the Kurds fighting in Syria, as well as the Syrian military — in fact anyone that is fighting against the Islamic State — will have to lend a hand. But the very fact that many countries are taking part in air operations helps to contain the momentum of the jihadist move, which stirred the imagination of many jihadists across the globe. But make no mistake about this: Airstrikes alone will not put an end to this affair.”

Al-Monitor:  Are you concerned by the fact that some Arab Israelis have also recently crossed stealthily into Syria via Turkey to join the ranks of the Islamic State?

Ya'alon:  We know of a few dozen Arab Israelis who have done this in Syria and Iraq. Obviously we treat each and every one of them as potential terrorists. If anyone returns alive from there, he is immediately arrested at the airport. A handful of them who returned have been arrested and will be tried. I hope the coalition will be able to stamp out this phenomenon of the Islamic State.

Al-Monitor:  Does this pose a threat to Israel?

Ya'alon:  At this stage, the answer is no. The Islamic State isn’t close to our borders. Initially we thought that if no one was able to stop it, IS would end up at the Golan Heights border. But this has yet to happen. Even Jordan is bracing for this threat, in case it were indeed to materialize.”

Al-Monitor:  Is Jordan being assisted by Israel in those preparations?

Ya'alon:  (The minister opted to skip answering that question.) In connection with the Iranian issue, not even the smallest wedge could be driven between Ya’alon and Prime Minister Benjamin Netanyahu, but continued:

Ya'alon:  I’m concerned by the way the negotiations are conducted between the world powers, led by the United States, and Iran in terms of the nuclear issue. Iran is a central player in the Middle East and is very important to its stability — that’s obvious. The Iranians call this aspiration for hegemony throughout the region "exporting the revolution." They invest a great deal of money and energy in this, while destabilizing the regional interests of the other Arab players, as well as the interests of the United States and the West, indeed those of the whole world. Without Iran, Hezbollah in Lebanon, as a phenomenon, has no raison d’etre. In fact, it is an Iranian proxy. The Islamic jihad in the Gaza Strip is an Iranian proxy, too. But we’re not talking just about Israel. Their involvement in Afghanistan against Western and Arab interests is aimed at creating a weak and unstable Afghanistan, because Iran doesn’t want a strong or pro-Western country. It’s the same thing in Iraq, where the Iranians mainly support the Shiites, but at some point they also supported the Sunnis. The main thing for them is to see the bloodletting continue and to prevent Iraq from emerging as a strong country or as a pro-Western one, perish the thought. But it’s not restricted only to those places. It also happens in Bahrain, Yemen, South Africa and South America. Iran also set up terrorist infrastructures in south Asia. It made such attempts also in Europe, where a terrorist attack was mounted against us in Burgas, Bulgaria in 2012. There’s Iran for you. It is willing to make sacrifices. It paid with sanctions, because this is a supreme goal for the radical Shiite Iranian regime.”

Al-Monitor:  How was all of this tied to the nuclear issue?

Ya'alon:  This is reflected most clearly with regard to the nuclear issue. That’s what striving for regional and global hegemony is all about. The good news in terms of the negotiations is that international pressure, mainly economic, is what essentially brought the Supreme Leader [Ayatollah] Ali Khamenei, who is the [real] decision-maker in Iran, to the point where he realized that if he continued down that road, the economy would collapse and the Iranian people would rise up against him. So having no other choice, he agreed to hold negotiations. We thought that much tougher postures could have been presented and that if Khamenei had felt that his survival was in real jeopardy, he would have been willing also to make concessions. Surviving is the most important thing for the ayatollahs in Iran, even more so than the nuclear program. Here, unfortunately, we see the West making concessions and the scope of the current discussions would result in an agreement which isn’t a good one.

Al-Monitor:  What would constitute a good agreement?

Ya'alon:  A good agreement would do away with all the nuclear program’s core capabilities. There shouldn’t be any enrichment of uranium or any plutonium. Such an agreement will allow the world to sleep soundly. This is all the more necessary in light of the fact that Iran has missiles that are deliberately manufactured so as to allow nuclear warheads to be mounted on them. And there is also the issue of terrorism. And neither one of these topics is being at all addressed. Right now the discussions focus on how many centrifuges will be left in Iran. Why should there be any centrifuges left in Iran? What for? After all, they claim it’s a civilian project. There are ways of supplying nuclear fuel to a civilian project. There are many countries that have civilian nuclear programs but have no centrifuges. The very fact that Iran has been insisting on [maintaining] these core capabilities and that the world powers have given up on this raises many flags. That’s why the agreement — if one is achieved — will not be a good one. It’s true that in this state of affairs Iran will need more time to assemble a bomb. But how much more time? It will need a year to 18 months. So is this what it all boils down to? That’s why we certainly have reason to be concerned, both in terms of how the negotiations are conducted as well as the preservation of Iran’s global threat as we encounter day in, day out in Syria, and through Hezbollah and terrorism.

Al-Monitor:  What does Israel see as a bad agreement? Is the military option still on the table?

Ya'alon:  We need to be ready to defend ourselves by ourselves, whatever the situation. I am convinced that in the end we will know how to handle this also vis-a-vis this Iranian regime and all its aspirations. By combining diplomatic pressure — which no longer exists because Iran isn’t isolated — internal pressure due to the sanctions and a credible military option, we can create a situation whereby the Iranians will truly stop their nuclear project.

Al-Monitor:  However, none of those elements exist anymore. You said so yourself: The external pressure has stopped, the sanctions have been eased and the West’s military option is off the table.

Ya'alon:  Prime Minister Netanyahu drew a "red line" during his UN address [September 2012]. This line has yet to be crossed, and for a reason. We will continue to monitor whether this line has been crossed or not. And Israel is prepared to defend itself by itself.

Ya’alon is indeed trying to revive the Israeli military option, albeit not immediately. Obviously, as long as the negotiations between the powers and Iran have not been concluded, this is not an option. The question remains of what will happen if the negotiations conclude with what Israel calls a “bad agreement,” leaving Iran with some 5,000 active centrifuges and “core capabilities.” Will Israel, which keeps investing billions of dollars to preserve its military capability that was built up for many years to strike at Iran’s nuclear installations, then resume its threats? In light of this interview with Ya’alon, the answer to this question is affirmative.