Israeli officials reject the US assumption by which a deal with Iran would draw it closer to the West and assist in resolving other Middle East conflicts. 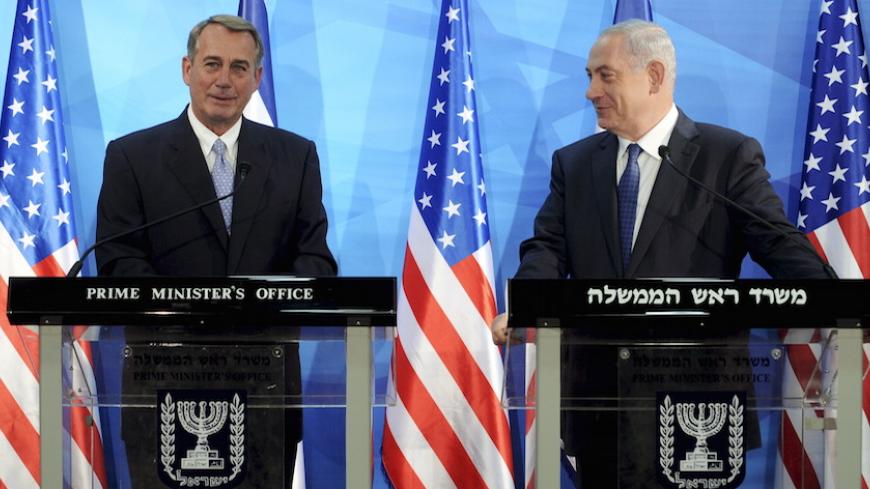 Israeli Prime Minister Benjamin Netanyahu (R) looks at the speaker of the US House of Representatives, John Boehner, as they deliver statements in Jerusalem, April 1, 2015. - REUTERS/Debbie Hill

In the battle now raging between Israeli Prime Minister Benjamin Netanyahu (Bibi) and the Republicans’ approach and that of US President Barack Obama and the Democrats, a moment of comic relief occurred April 5: for one instant, Netanyahu’s photo was published by the Associated Press with the notation "(R)," as if he were a Republican senator. This was a Freudian slip that was found by Israeli blogger Tal Schneider and quickly shared on Twitter, before it was swiftly corrected.

But maybe the error wasn’t so fundamental? Netanyahu is a Republican in all of his being. This fact has been instilled and percolated everywhere, even in Israel. This week a nimble Israeli Web surfer named Roy Taragan invented a brilliant new moniker for Bibi: “Republikudnik,” a hybrid that came into being by grafting the Republican Party, which now controls the US Congress, and the Israeli right-wing party, the Likud, which controls Israel. This is the equilibrium of mutual assured destruction as of now: Obama and US Secretary of State John Kerry on one side, and Netanyahu and House of Representatives Speaker John Boehner on the other.

The battle is raging in the media. Obama and his staff’s media offense reached an apex over the weekend, when the president himself was interviewed by columnist Thomas Friedman for The New York Times, while his close aide Ben Rhodes was sent to interviews on all the Israeli TV channels. On April 6, the president gave another interview to National Public Radio and said it would be a “fundamental misjudgment” to demand that Iran recognize Israel in exchange for the nuclear agreement. At the same time, Obama and his people are broadcasting a conciliatory tone. Rhodes announced in the interviews to the Israeli media outlets that Netanyahu will be invited to Washington and will meet the president after he forms a coalition. Obama himself used measured language and managed to let slip, a few times, that he “respects Netanyahu.”

Anyone who thought such gestures would yield similar signals from the Israeli side was wrong. In Israel, it was Netanyahu himself who went on a round of interviews in the US media, where he couldn’t manage to utter a statement that he “trusts Obama.” After him came Minister for Strategic Affairs Yuval Steinitz, who briefed the foreign media and spoke of the Israeli military option, which, in his words, is “still on the table.” And the cherry on top was the interview on Israel's Channel 2 with Minister of Defense Moshe (Bogie) Ya’alon, his first since the Lausanne declaration, immediately after Rhodes’ interview, where he harshly criticized the agreement.

At the same time, it turns out that Israel is working with the Republicans on two additional legislative initiatives, which will make it hard for the administration to pass any final agreement with Iran (by, among other means, defining the pact as an “international treaty,” which needs a separate authorization in the US Senate).

Ya’alon continued with the Israeli line of criticism, and even framed it correctly. He said that these are “two opposing worldviews.” Ya’alon is absolutely right. This is not just a conflict between people with different opinions. This is an ideological, psychological, historical and even philosophical difference. Obama’s conceptual world is utterly different from Netanyahu’s conceptual world.

By the way, Obama has an Israeli twin, who also has been a president: Shimon Peres. The optimistic worldview, which sees possibility, not just risk, is shared by both of them. Netanyahu and Ya’alon, like most Republicans, see the complete opposite. Their world is divided into black and white, good guys and bad guys; the naive will not survive and those who believe the black side will end up being erased and disappearing from the international map. This is the disagreement.

Who is right? Only history will tell. In the meantime, Israelis are recalling the North Korean precedent. They have a case. High-ranking Israeli officials have told Al-Monitor in the last few days that Obama’s language following the framework agreement with Iran is very similar to former President Bill Clinton’s following a similar agreement he reached with North Korea. In both cases, they were seen as naive Democratic presidents used by belligerent and unrestrained dictatorships.

The case of Iran — the Israelis say — is much more difficult and dangerous than that of North Korea, because it involves a radical messianic religious belief in a nation that seeks to become a world power and declares, on a daily basis, its commitment to destroying Israel.

Here, I’ll bring the opposing worldview, promoted, of course, by Netanyahu, along with the senior members of his party, including Ya’alon and the entire Israeli right. In closed-door conversations, they say the Americans are naive, defeatists, that they have no clue whom they’re dealing with, that they are self-deprecating in front of the Iranians, that the Americans give the Iranians credit without guarantees and are turning Iran, essentially, into a nuclear threshold state.

The comparison to North Korea is heard, again and again, from senior officials in Jerusalem. Phrases such as “colossal mistake” and “dreadful disgrace” are becoming worn out from overuse in these conversations. Israeli officials say that Obama will lounge in his presidential library while Israel, along with the other betrayed allies of the United States, will deal with the ramifications of the Iranian nuclear program in the Middle East.

No, they’re not impressed by Obama’s emotional statements about how hard it is for him to hear criticism that he didn’t do everything he could for the security of Israel. “If Israel were to be attacked by any state, we would stand by them,” Obama told Friedman, which garnered mostly waves of laughter from the Israeli right. Rhodes’ words, according to which even after the expiration of the agreement “Iran will not have a bomb,” didn’t make an impression. In Israel, people live in the Middle East, know the norms that guide it, look around and see everyone slaughtering everyone and setting the house on fire, and so no one here has unnecessary illusions. You can’t believe Iran — that’s the governing motto.

In the Channel 2 interview, Ya’alon was asked if Israel believes the US promises. “We don’t believe the Iranians,” Ya’alon said, “Our security relationship with the United States is excellent, but on the Iranian issue, which is existential for us, there’s a deep disagreement and we see in the arrangement that was presented a historical error. Iran calls for wiping Israel from the map and calls for death to America, while … taking over Yemen, deposing a pro-US regime, trying to open a front against us on the Golan Heights. Let's remember January [2015] — an Iranian general [from the Islamic Revolutionary Guard Corps] at our borders, what was he doing there? Hamas and Islamic Jihad receive tens of millions of dollars from Iran to start digging tunnels again, and these things are not discussed at all in the agreement,” Ya'alon said.

Here, too, we can see the chasm between the worldviews: Behind the US move is a basic belief in the possibility that solving the nuclear issue will open Iran to the West, release pressure and bring change, even if slowly, to the character of the Iranian regime, and even cause its downfall. Israel believes the complete opposite will happen. “The agreement will pave the path for Iran, will give it legitimacy … it will strengthen its economy, the money will be funneled to finance terror,” Ya’alon added.

When he was asked why Saudi Arabia — Israel’s secret ally — publicly praises the agreement, Ya’alon's response was interesting. He said, “I suggest you listen to what the Arab countries say in the room and not outside of the room. A situation was created where the Sunni Arab states and we have a common enemy and common interests: Iran, the radical Shiite axis, the Muslim Brotherhood, global jihadist elements and so on, and therefore what’s important is what they say in the room, and not outside.”

He was asked whether the Americans “were obsessive” in negotiations with Iran, hinting at what he said about Kerry’s obsessiveness and messianism. “It’s not a question of being obsessive,” Ya’alon answered, “it’s a worldview that we dispute. Suddenly, Iran is viewed as the solution to all the problems. It will solve the problems of Afghanistan, Iraq, Syria, Lebanon, Yemen. It’s a bad bargain. Whoever thinks that the negotiations would turn the Iranians pro-Western is wrong. We will not witness the opening of a McDonalds in Tehran and [the cries of] 'Death to America' will be heard during the negotiations as well. There is a worldview here that is different from ours; thus it is our obligation to raise this issue all around.”

Israel is indeed flooding the airwaves with this issue. The question is what the effect of this discussion will be, and what will remain of Israeli-US relations after the water subsides.