In view of Defense Minister Moshe Ya'alon's recent statements, Prime Minister Benjamin Netanyahu knows that his top minister might jeopardize the possibility of talks with the Palestinians as he did before. 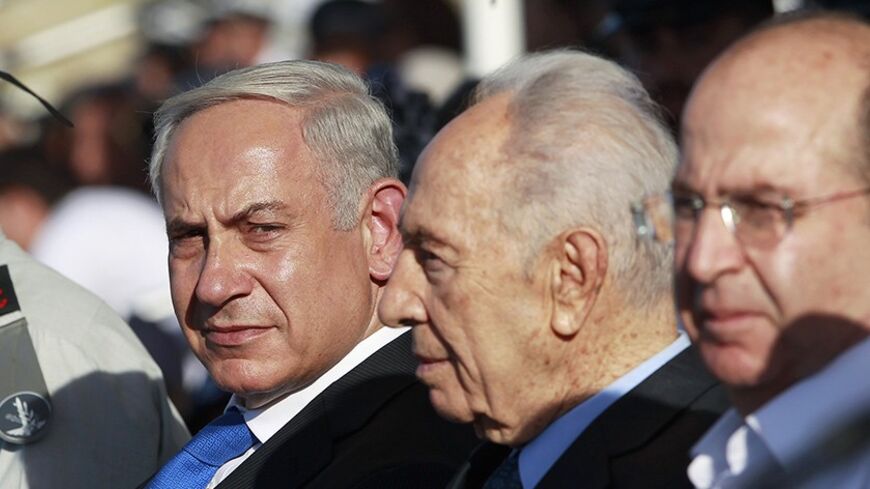 But if the ox had a reputation for goring, yet its owner failed to keep it under control, he must pay full compensation — a live ox for the dead one — but he may keep the dead ox. (Exodus 21:36)

Shimon Shiffer, the commentator of Israeli daily Yedioth Ahronoth, did us a big favor on Jan. 14 by publishing the “off the record” slanderous words leveled at US Secretary of State John Kerry by Defense Minister Moshe Ya’alon. From now on, Prime Minister Benjamin Netanyahu will no longer be able to shake off the doings of his defense minister by claiming that “he didn’t know with whom he was dealing.”

The faltering apology Ya’alon sent Kerry does not change the worrisome fact that the Israeli government’s defense minister treats the negotiations underway between Israel and the Palestinians like a strategic nuisance. Had it been Minister for Strategic Affairs Yuval Steinitz, one might have treated it as a “quirk.” If Foreign Minister Avigdor Liberman had called his American colleague “messianic” and “obsessive,” his words could have been interpreted as yet another domestic political spin. This is not the case when Ya’alon, the man directly in charge of the Israel Defense Forces, believes that the diplomatic process leads to the murder of Israelis. The minister of defense has the power and the authority to sabotage this process and even to destroy it. An overzealous reaction to attacks by terrorist groups, such as Operations “Defensive Shield” and “Cast Lead,” or the 2002 assassination of Raed Karmi, put the diplomatic process with the Palestinian Authority (PA) into a deep freeze.

No. Ya’alon’s statement that he believes the political process results in the killing of Israelis was not a slip of the tongue or a far-fetched interpretation of his words, whispered into the ears of a journalist. In a public speech he delivered on Nov. 17, 2013, at a conference at Tel Aviv University’s Dayan Center, Ya’alon pointed to a direct link between the negotiations and growing signs of an increase in the number of terror attacks. He claimed that the source of the unrest was the frustration felt by the Palestinian public over revelations of corruption in the PA and the meager results of the diplomatic process. “What’s happening here is the result of the diplomatic process,” Ya’alon declared, speaking of Israeli terror casualties. “At one time, we called them 'victims of peace.' So today they are victims of the diplomatic process.” He explained that the negotiations “are presented in the Palestinian media along with the delegitimization of Israel. And then tensions increase and the fuel fumes feed the motivation to murder Jews.”

At that speech, he also pointed an accusing finger at the West. “What’s most serious,” he said, “is the fact that the West has a misconception about the conflict, … they say 'land for peace.' If there’s anything temporary in the Middle East, it’s peace or houdna,” he said. That time he didn’t call the US approach “messianic” or “obsessive,” choosing to call it “patronizing” and “now-ism,” a reference to the US desire to achieve peace now.

The defense minister ended his speech with a quote from Moshe Dayan, the defense minister in the 1967 Six-Day War, that “time works in our favor.” Ya’alon probably forgot how “time worked in our favor” when Dayan still held office in the 1973 Yom Kippur War. He also skipped over Dayan’s famous observation: “It’s better to have [Sinai town] Sharm el-Sheikh without peace, than peace without Sharm el-Sheikh.” Five years later, in 1978, Dayan turned into an enthusiastic supporter of the Camp David Accords with Egypt.

Ya’alon, on the other hand, is proud of having “sobered up from the Oslo illusion.” At a secretly recorded appearance in August 2009, Ya’alon, then deputy prime minister, revealed that he does not recognize the expression “illegal settlements” and the ’67 borders. At a meeting with members of the Jewish Leadership movement, the Greater Israel circle headed by Knesset member Moshe Feiglin, Ya’alon declared, “Jews must live in the whole of the land of Israel forever.”

If Jews must live forever in the heart of Hebron and the outskirts of Nablus, what interest do they have in a solution designed to remove them from there? And, indeed, in a June 2012 interview with Israeli daily Haaretz, Ya’alon praised the freeze in the negotiating process. “One can go on like this even for another 100 years,” he said. He added, “Anyone who suggests a solution now, suggests a false illusion. A golden calf. Self-delusion.” As is well-known, US President Barack Obama is one of the foremost proponents of a speedy resolution to the conflict, meaning he is the leading proponent of illusions, a self-deluding builder of golden calves. In that same interview Ya’alon noted that “stability is not achieved by imaginary ceremonies on the White House lawns, but by deterrence, using a thick stick and a carrot.”

On another occasion, this time during a visit on Jan. 7 of this year to the army’s central command headquarters, Ya’alon pointed to a direct link between the diplomatic process and the expanding phenomenon of attacks on Israeli civilians and soldiers by young, unorganized Palestinians — a phenomenon known as “mood terrorism.” According to Ya’alon, “The Palestinian media as well as his (Palestinian Authority Chairman Mahmoud Abbas' ) rhetoric certainly lead eventually to incitement and to the decision by individuals to go out and commit terror attacks.”

The observation about the link between promoting negotiations and an abundance of terror attacks can be traced to an article published by military commentator Amir Rappaport several days earlier, on Dec. 24, 2013. Rappaport wrote, “The diplomatic negotiations, which according to all estimates are not leading to any agreement, stir up unrest and encourage many elements to carry out attacks.” He reported that the defense apparatus is readying for an additional escalation of unrest and violence this coming April, at the end of the nine-month deadline which Kerry set for the negotiations. The military commentator’s sources provided him with a prediction of “a pretty hot winter and spring, with lots of work for the defense forces.”

Two people have it in their power to decide whether the work of the defense forces in the coming months will focus on attempts to locate the fires to give a peace agreement a chance, or stir up the flames to chase away once and for all “the obsessive messiah.” They are Netanyahu, who bears the supreme responsibility for the policies of peace and defense, and the chief of staff, Benny Gantz, who is charged with carrying out the government’s policies.

In his 2004 book A Front Without a Hinterland — a Journey to the Limits of the Peace Process (Yedioth Ahronoth Press), Shlomo Ben-Ami, who served at the start of the second intifada as foreign minister and a member of the defense cabinet, recounted that his colleague, the late Minister Amnon Lipkin Shahak, who was charged at the time with attempts to bring about calm, “was left helpless in the face of the policies of the senior military echelons.”

Ben-Ami noted that the army dealt with the second intifada with “unbelievable force, which was not in keeping with the instructions of the political echelons who sought to delimit the difficult-to-find balance point between the need to react to violence and the need to contain the warring spiral and leave room for a renewal of negotiations.” The name of one of the two senior commanders, who led the campaign that put a spoke in the wheels of the diplomatic process for many years, was the deputy chief of staff, Gen. Moshe Ya’alon.