Israel's defense minister speaks his mind about US 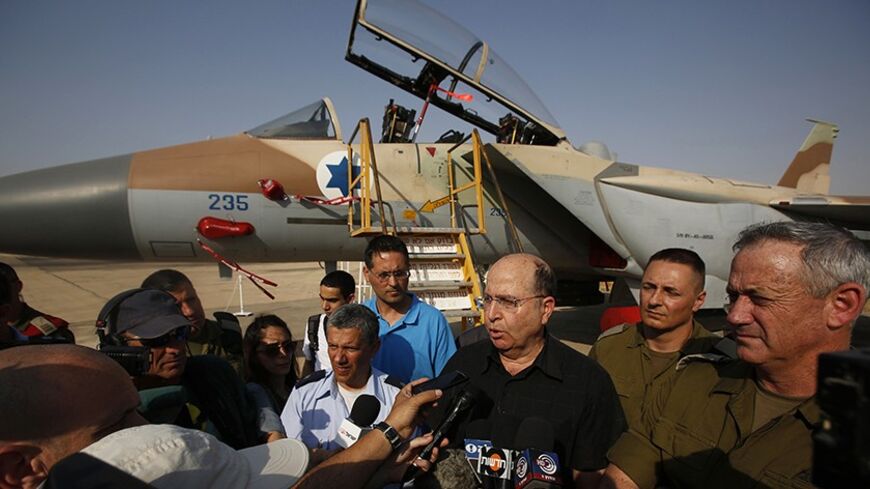 The way the crisis du jour between Israeli Defense Minister Moshe "Bogie" Ya’alon and the United States has been resolved is very telling of the situation in general. It’s like toddlers in kindergarten who are not on speaking terms. Playing the babysitter part is Prime Minister Benjamin Netanyahu. He is the one who got the angry phone call. The complainer was US Secretary of State John Kerry, who has not been speaking directly with Ya’alon since the latter called him “messianic and obsessive.” Following the irate complaint, Netanyahu summoned the rascal kid — Ya’alon — to tell him off or get clarifications from him. Following this conversation, Ya’alon picked up the phone and called Washington, where he found refuge in the form of his American counterpart, Defense Secretary Chuck Hagel. Ya’alon and Hagel have actually fostered relatively good ties, especially in comparison to the relationship between Ya’alon and Kerry, for instance. The two held a good-enough talk. Ya’alon explained what he had said and Hagel concluded that some of the things attributed to the Israeli defense minister had indeed been taken out of context. All we can do is wonder what the other part of the talk was like. Parting as friends, they each went their own way until the next round.

It was not until long ago that we could only hear Ya’alon behind closed doors — during in-depth talks, internal discussions or background briefings. Everyone who has met with him — and I have met him on several occasions since he took office — heard the explicit, cogent and painful things he had to say about the US administration and the policy of “decline” or “withdrawal” it leads around the globe. Ya’alon’s problem is that he cannot keep things pent-up. The pressure keeps building until everything explodes.

The defense minister’s background conversation with the journalist, which was later published, was a misstep that had to do with journalistic ethics. Yet Ya’alon has only himself to blame, because he has been generously dispensing his insights far too often and at far too many forums. His address on March 18 in a closed forum at Tel Aviv University quickly leaked to the Israeli daily Haaretz, spreading like wildfire. In its wake, an untypical American reaction ensued from an anonymous yet furious administration official who explained to Ya’alon that he who sows the wind reaps the whirlwind (Book of Hosea 8:7).

The problem with Ya’alon is that his presentation makes sense. Cogent and compelling, it springs out of his heart. Growing up as a kibbutznik, the defense minister was a member of the Labor Movement, which in Israel is considered to be a left-wing party. As former director of military intelligence, he supported the Oslo Accords. Then, regaining his senses, he took a quick, vigorous and sharp turn to the right. Generally speaking, the function of Israeli military intelligence director leads many Israelis to become disillusioned by the idea of peace with the Palestinians and the dream of two states living prosperously and quietly side by side. Every morning, the Israeli director of military intelligence reads, hears and watches sensitive information that analyzes the Palestinians’ inner-most secrets. Ya’alon has arrived at the keen insight that Israel has no partner.

In his interview to Israel’s TV2 on March 15, Ya’alon said in no uncertain terms that Palestinian Authority President Mahmoud Abbas was no partner. Taking place amid the most sensitive time for the future of Kerry’s efforts, the interview was like a bucket of Siberian ice-cold water that was dumped on the Americans’ head. To my mind, Ya’alon’s statement, which was made three days before his remarks on the American policy, is what caused the Americans to fly off the handle. The strong and belated reaction came later in the week, when Ya'alon provoked Kerry with his preaching talk at the university.

The reality on the ground and the events around the world corroborate everything Ya’alon says. The following is his philosophy in a nutshell: At any international forum he attends, people hold corridor talks about the “decline of the West” or the “Great American withdrawal.” The Obama administration demonstrates weakness all along. The fact that it announces up-front that it has no intention of using force renders its threats empty, quickly decimating American deterrence to zero. More than anything, the events in Ukraine illustrate Ya’alon’s solid philosophy. Russian President Vladimir Putin — a man who understands a thing or two about the use of force — totally brushes off US President Barack Obama. He knows that the American president is weak, so he does as he pleases, without paying almost any significant price.

But what really drives Ya’alon out of his mind is the Iranian issue.

In this connection, the Americans truly missed a historic opportunity, the Israeli defense minister observes. The sanctions had brought Iran to its knees, forcing it to urgently reach an agreement with the West. The latter, on the other hand, was in an ideal position. It did not have to have an agreement. Power was on its side and the conditions were in its favor. During the actual negotiations, Ya’alon notes, everything reversed. The Iranians behaved like they are unbothered about the arrangement, whereas the West behaved as if it had to have it. So instead of really neutralizing Iran’s nuclear program, what was brokered was an agreement that freezes the actual situation, allowing Iran to continue its efforts to become a nuclear threshold state. The Iranians, says the Israeli defense minister, were willing to sacrifice the nuclear reactor in Araq, but nobody really made that demand of them. Meanwhile, the sanctions are unraveling, businessmen and banks dash to Tehran. Iran’s foreign minister, Mohammad Javad Zarif, is doing his victory rounds at every conceivable capital, and the whole thing is doomed. A permanent status agreement will not come out of this, Ya’alon estimates.

Contrary to some reports this week, I do not think that Ya’alon has changed his mind and that he now supports a military strike against Iran’s nuclear installations. Ya’alon has always espoused the notion of, “If I am not for myself, who is for me?” However, he is well aware that as long as the parties hold negotiations, Israel cannot strike. These negotiations will last for as long as President Obama remains in office, Ya’alon asserts. Neither Tehran nor Washington will provoke each other too much. What they will do is to occasionally extend the deadline and bide time. Obama will be able to retire to his presidential library and say that he had kept his promise of preventing Iran from going nuclear “on his watch.” Tehran, on the other hand, will be able to preserve its capabilities to break out to a future bomb.

Make no mistake about it: Israel is not relinquishing the military option. The capabilities the Israeli air force and Israel Defense Forces (IDF) have developed at a cost of 12 billion shekels (approximately $3.4 billion) remain intact and continue to be enhanced. Nobody has given the all-clear sign. Funding has not stopped, and having a credible Israeli military option on the table in connection with Iran is considered here to be a strategic mainstay in the effort to curb the Iranian nuclear program.

Israel’s problem is that its military option was not supposed to be the only one on the table. It should have been dwarfed by a much more potent, intimidating and credible American-Western military option. The problem, some say in Israel, is that Obama is mentally incapable of setting up such an option. And even if he did, nobody would believe him, apropos Ya’alon’s remarks on American weakness and the West’s withdrawal and decline.

The Iranians only understand force, some argue in Israel. The fact remains that the only time they truly shelved their military program was immediately after the disastrous American invasion of Iraq.

In the past two years, coordination between Israel and many other Middle Eastern elements has greatly increased. Many countries in the Arab world, which maintain no diplomatic ties with Israel and to date made do with token, ad hoc intelligence ties, have become sort of “back-channel” allies. The secret ties with Saudi Arabia, Gulf states, Egypt, Jordan and a host of other countries have been published in the past. Compared to what senior officials from those countries tell the Israeli defense minister, Ya’alon’s criticism sounds like a conversation between the queen of England and one of her subjects.

Ya’alon’s problem is that he does not make do with telling just the Americans themselves what he thinks. He seems to have some uncontrollable urge to vent his frustration in public. While Ya’alon might very well be right, he is probably not being smart. The Americans don’t like to hear such things said about them in public. Israel does not have another United States. According to any cost-benefit calculations, Ya’alon has achieved nothing and has caused damage — to the state and to himself. Here is how a senior minister in Netanyahu’s cabinet defined the situation this week: “For God’s sake, what’s going on here, Jews? Bogie (Ya’alon) declares war on America, Minister of Economy and Trade Naftali Bennett declares war on Europe. What? Aren’t there enough Arabs to go around?”

What remains is the Palestinian track. Here, too, Ya’alon is the great ideologue advocating the “no partner” approach. He says out loud what Netanyahu is whispering inside the room and is afraid to tell the Americans. “My parents,” Ya’alon says, “agreed to the partition of the land. I supported the Oslo [process]. It was the Palestinians on the other side who were intransigent. Under no circumstances are they willing to recognize the fact that there is a Jewish state here. If the alternative is between an international boycott and rockets on Ben Gurion Airport, I’ll take the former. There is no reason to intimidate us. Time is on the side of those who know how to use it well. We have no peace agreement with Lebanon, but we have mutual deterrence and the situation is tolerable. We have no agreement with Hamas, but deterrence in Gaza is effective and the situation is tolerable. When it comes to Judea and Samaria, we have to invest in the economy, in the Palestinians' governance ability, enforce law and order and end the unbridled incitement. Why is it taken for granted that the Palestinian state can be free of any Jews while we have a million and a half Arabs that nobody questions their right to live among us?”

From Ya’alon’s standpoint, Kerry’s efforts to broker an arrangement with the Palestinians are hopeless, standing no chance. All Israel needs to do is to “let this event blow off peacefully,” so that it will not be accused of intransigence. So far, this tactic has proven to be rather successful. Netanyahu goes along with Kerry, while Abbas is the recalcitrant one. The problem is, that the person unmasking Israel’s intransigence with his unnecessary blabber is Ya’alon. After everything he says and lectures, he — of all people — is the one that compromises Israel’s chances of “letting this event blow off peacefully.”