Many Egyptians, upset with Hamas for its alleged support of terrorism against their country, are not expressing much sympathy for the Gaza Strip in its conflict with Israel. 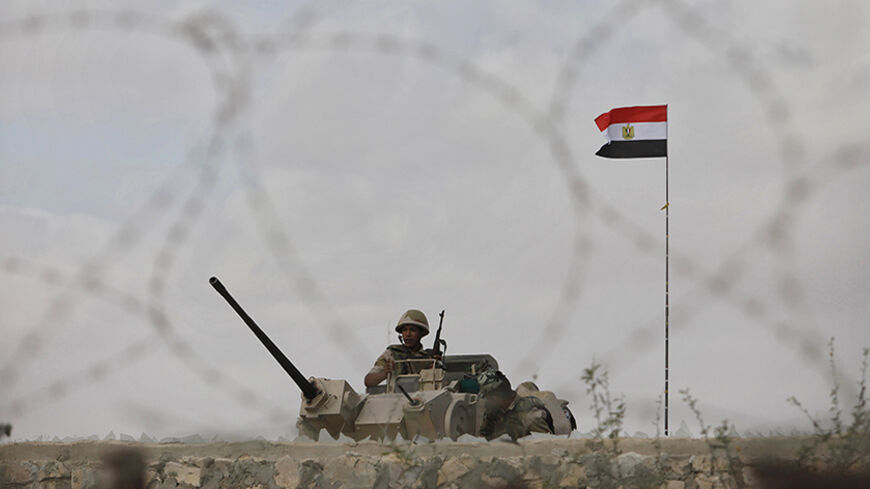 An Egyptian soldier keeps guard on the border between Egypt and the southern Gaza Strip, July 1, 2013. - REUTERS/Ibraheem Abu Mustafa

CAIRO — In November 2012, when Israel assassinated the Izz ad-Din al-Qassam Brigades' top commander, Ahmed al-Jabari, and unleashed its Operation Pillar of Defense, then-Egyptian President Mohammed Morsi was the first to interfere. He recalled Egypt's ambassador to Tel Aviv, ordered a full opening of the Rafah Terminal to any and all Palestinians, and sent Prime Minister Hisham Kandil to the Gaza Strip on an unprecedented official visit. In a few days, a cease-fire was brokered by Cairo.

Back then, I harshly criticized Morsi, not for his interaction with the war in neighboring Gaza, but rather for the amount of effort exerted there while his cabinet did almost nothing for the families of 53 children killed in a train crash in Upper Egypt while Israel pounded the Gaza Strip. It was clear at the time, when the Muslim Brotherhood's cabinet blamed the train crash on Hosni Mubarak's three-decade, corrupt rule, that Gaza meant more to Morsi and his ruling outfit.

But the reaction of Egypt's current regime led by former defense minister and now-President Abdel Fattah al-Sisi to the ongoing war in Gaza — with the Egyptian news media and even a great portion of the Egyptian populace trailing along — has shown a new policy that is at the least apathetic and is at many times supporting Israel's military action, despite its continuing to take innocent Palestinian lives with impunity.

A semi-official reaction initially came from the Ministry of Interior's official Facebook page, which published photos of 16 flag-wrapped caskets of soldiers killed in the border town of Rafah in August 2012. The photos were captioned: "Sorry, Gaza, We Won't Forget."

Indirectly accusing Hamas of the massacre, followed by an attack on the Israeli side of Karm Abu Salem crossing terminal — a terrorist attack with murky details and no actual evidence publicly presented by the Egyptian authorities — the Ministry of Interior offered what soon proved to be a microcosm of Egypt's overall approach.

On July 10, when Egypt finally decided to open the Rafah Crossing Terminal, the only crossing point for Gaza's 1.7 million people that doesn't lead into Israeli-controlled territory, 16 tons of food and medical supplies were shipped into the Gaza Strip as a first phase of a 500-ton donation made by Egypt's military. Only 11 injured civilians out of more than 600 were allowed in for treatment at Egyptian hospitals, and on July 12, four more cases were allowed in as the injured toll exceeded 1,000. Insofar as journalists, a European medical team and Gaza residents begging to reunite with their besieged families were concerned, no one was allowed in.

The minimal and extremely slow measures taken by the Egyptian regime actually angered some local figures who demanded a harsher approach. Former parliamentarian Mohamed Abu Hamed wrote on his Twitter account that "Egypt should treat Palestinians at the terminal and not allow them in."

Besides Abu Hamed's comments, Egypt's leading cable channel, CBC, described what was happening in Gaza as "Israeli air force targeting terrorist sites." This channel, after all, is owned along with several other media outlets by Mohamed al-Amin, an Egyptian billionaire who declared that he was donating half of his possessions to the Egypt Fund inaugurated by Sisi.

Meanwhile, Hayat al-Dardiri, a controversial presenter of the Faraeen Cable Channel said on-air that the "Egyptian people will not accept anything less than a military strike by Egypt's military to destroy Hamas."

What is more staggering than mass media comments is that only one minimal gathering took place in support of Gaza: an unexpected and unprecedented nonreaction in comparison to past years, when thousands of protesters would occupy major squares and at some point clash with police forces attempting their dispersal.

Hanan Fikry, a prominent Egyptian journalist and member of the board of directors of Egypt's Press Syndicate, told Al-Monitor, "The coverage of the Gaza war was very respectful and sympathetic to Gaza."

"There are some independent voices who failed to distinguish between Hamas, which took over the Strip by force, and Gaza itself," Fikry said, though a lot of what she described as "independent voices" were in fact Egypt's most-viewed media outlets.

"I believe that Egypt as a state is fulfilling its duty and there is no need for any further popular endorsement, but there should be a firm stand by the world against the Israeli military that left more than 160 Palestinian dead."

On the contrary, Ahmed Ajami, who regularly marched in support of Gaza since Muhammad al-Durrah's death during the second intifada in September 2000, volunteered to collect donations of medical and food supplies for a convoy, organized by young people, scheduled to leave Cairo for the Rafah Crossing Terminal on July 17.

"The media coverage is derived from the government's policy and both are disgraceful, such minimal measures were taken so the pro-regime media parades it as Egypt fulfilling its duty toward Gaza," Ajami told Al-Monitor.

"When millions of illiterate people watch TV channels that tell them on a daily basis that the Gaza Strip is the source of terrorism, you can't expect their reaction to be any better," said Ajami, who was a high school student when protesting in support of Gaza for the first time.

"If a protest marched through Cairo in support of Gaza as we saw in England and the United States, it would most probably be attacked and protesters would be detained," Ajami said.

Since the killing of the 16 soldiers at a checkpoint in Rafah in August 2012, a month after Morsi rose to power, the Egyptian media and security officials have led a relentless war on Hamas, branding it a terrorist organization that should be crushed. Hamas' attitude toward Egypt wasn’t any better: The organization was neck-deep in arms smuggling across Egypt to arm its military wings, while its political rhetoric grew more hostile toward its only friendly neighbor.

Somehow, Egypt started viewing the Gaza population as Hamas, or at least complicit in the organization's activities.

"The current regime is prosecuting Mohammed Morsi and Muslim Brotherhood figures for conspiring with Hamas. Both are considered terrorist organizations, and it apparently views Gaza as the enemy, not Israel," Ajami said.