A train hit a school bus, killing 51 children in Assiut, Egypt. President Morsi, after a surge in popularity for his response to his reaction to Israel’s attack on Gaza, has been widely criticized for his response to the tragedy, reports Mohannad Sabry in an Al-Monitor exclusive. 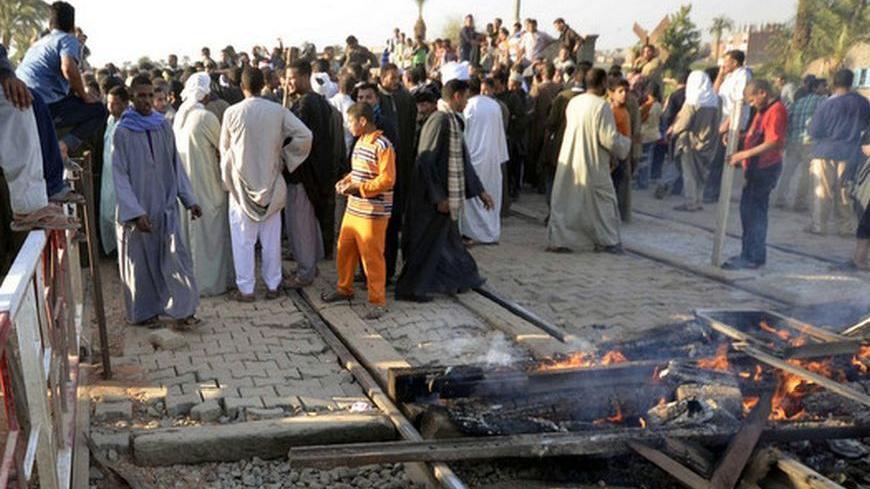 People gather at the site near Assiut, where 51 schoolchildren were killed when a train slammed into a school bus as it crossed the tracks at a rail crossing, Nov. 17, 2012. - REUTERS/Stringer

CAIRO — President Mohammed Morsi and his appointed cabinet of Prime Minister Hisham Qandil have been applauded by millions of Egyptians for their immediate, powerful, and all-in-all unprecedented chain-reaction to the Israeli attacks on the neighboring Gaza Strip. But the president’s rising popularity quickly plunged after a train crash killed 51 children in Upper Egypt on Nov. 17.

It took Morsi a few hours after an Israeli air strike killed Hamas’ military chief, Ahmed Al-Jabari, on Nov 14, to recall Egypt’s ambassador to Tel Aviv, order a full opening of the Rafah Crossing into Gaza, declare a state of emergency in all of North Sinai’s hospitals to receive injured Palestinians, and assign Qandil to lead an official delegation to the Gaza Strip despite the ongoing Israeli strikes that shattered the windows of Egyptian houses close to the border.

Egypt’s state-owned and independent media, politicians and non-governmental organizations praised Morsi for his support to Gaza’s government and people against the Israeli strikes. Tons of medical supplies and dozens for doctors arrived in the Gaza Strip within a rescue mission which the Egyptian government facilitated its immediate crossing through the Rafah Terminal.

On Friday, Morsi warned of the consequences of the ongoing Israeli strikes on Gaza and threatened a “people and leadership’s anger that Israel would not be able to face.”

But a few days after Israel pinned-down Hamas’ Jabari and a few hours after Morsi’s on-air threats, a railway worker at the town of Manfalut, a town of Assiut governorate some 200 miles south of the Egyptian capital Cairo, was said to have been asleep at 7 a.m. Saturday and failed to shut down the rail crossing which caused a speeding train to collide with a school bus and drag it for over a mile before coming to a stop. The crash killed 51 children aged 5 to 10 while 17 others were severely injured.

The deadly crash turned praises of Morsi’s foreign policy stunt into an avalanche of fiery condemnation over the government’s failure to apply much-needed domestic reforms, especially to Egypt’s Railway Authority that has been, over decades, blamed for accidents that claimed thousands of lives.

Shortly after 18 injured victims of the train crash arrived at the Assiut Educational Hospital, messages spread over social media calling on the public “to immediately supply the hospital with sodium bicarbonate which is unavailable and is urgently needed for the rescue treatment of injured cases.”

Director of the Assuit Educational Hospital, Dr. Osama Farouk, explained to the local Al-Mehwar cable channel “that shortage of emergency medicines and supplies is an ongoing issue in almost every major hospital in Egypt. Not only in the most recent case of the train crash victims.”

“Medical supplies to the hospital do not cover its needs, especially in the emergency department. Every time we face such issues we fax the Health Minister for immediate intervention,” said Farouk.

A doctor interning the Assuit Educational Hospital spoke to Al-Monitor on condition of anonymity, contradicting the hospital director. “There was not a single shot of sodium bicarbonate at the hospital, it’s one of the most basic but important supplies of emergency rooms,” said the doctor, who feared losing his job at the state-owned hospital if his name was made public. “This is one among hundreds of medicines that are always unavailable at hospitals, but I confirm to you that all those emergency supplies were generously available at the Gaza medical convoy that was immediately organized after the Israeli strikes.”

He added that the continuous shortage in medical supplies “is one of the main reasons why medical staffs have been holding strikes over the past months.”

General strikes and mass resignations organized by thousands of Egyptian doctors caused a 25 percent paralysis to state owned hospital during October 2012. Their calls for better wages, full maintenance of state-owned hospitals and increased security at medical facilities have not been addressed by the government so far.

The governor, Dr. Yehia Kishk, a heart surgeon, a high-ranking member of the Muslim Brotherhood, and a top officer of the Freedom and Justice Party in Assiut, praised the hospital despite the deadly accident that took place a few miles away from his office and the scandalous shortage of basic medical supplies at the biggest hospital in the governorate he runs since his appointment by Morsi.

“The Assiut Educational Hospital is one of the best in Egypt and its injuries department is run by top doctors and assistant doctors who have studied abroad and continue to offer great services to the people of Upper Egypt,” Governor Kishk said in a phone call on Saturday night to one of Egypt’s most popular TV shows, Al-Qahira Al-Youm [Cairo Today].

As the governor spoke to the prominent show host, Amr Adib, photos were broadcasted showing injured victims of the train crash lying on dirty beds without sheets or pillow cases at the hospital being described as “one of the best.”

Sitting at his presidential office, Morsi addressed the public more than 12 hours after the train crash. Unlike past speeches that went as long as three hours, this speech aired on state television lasted a little more than a minute.

“I decided to refer those responsible for the accident to the general prosecution,” said Morsi, who accepted the resignation of the transport minister and chairman of the state-owned Railway Department. “Whoever caused this painful accident will be punished.”

Morsi, a leading officer of the Muslim Brotherhood and former chairman of its political arm the Freedom and Justice Party, is prominent for his 2005 parliament speech where he demanded the immediate resignation of former Prime Minister Ahmed Nazif and his cabinet after a train fire killed more than 350 people in Upper Egypt. Morsi was head of the Muslim Brotherhood’s parliamentary bloc which regularly criticized former President Hosni Mubarak and his National Democratic Party that dominated the parliament and formed the government.

Mahmoud Shokri, a political analyst and Egypt’s former ambassador to Syria, told Al-Monitor that the Assiut train crash three days after the deadly attacks on neighboring Gaza “reflects how President Morsi’s foreign policy is being drawn and strengthened at the expense of domestic longstanding issues that require immediate care.”

“Morsi and his government lost every bit of the popularity they gained by their powerful reaction to the Israeli attacks on the Gaza Strip,” said Shokri.

Assiut’s deadly train crash killed more people in a few seconds than what Israeli air strikes on all of the Gaza Strip killed in four days since Ahmed Al-Jabari’s assassination which kicked off Israel’s military offensive “Operation Pillar of Cloud.”

“The deadly crash and the official reaction reflected a significant government failure on the domestic level,” said Shokri.

Mohannad Sabry is an Egyptian journalist based in Cairo. He has written for McClatchy Newspapers and The Washington Times, served as managing editor of Global Post's reporting fellowship "Covering the Revolution" in Cairo as well as a contributor to its special reports. Follow him on Twitter: @mmsabry