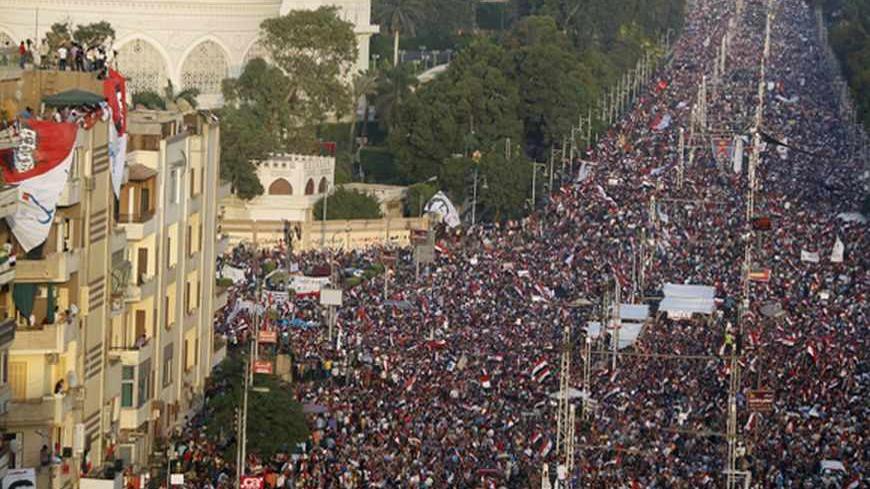 CAIRO, Egypt — June 30 proved to be very different from January 2011, which was made to look like a minor protest in comparison. Tens of thousands of protesters spent the night in the epicenter of Egypt’s uprising, Tahrir Square, which by noon couldn’t take any more protesters, as dozens of marches kicked off from almost every neighborhood in Cairo. Until nightfall, masses continued to march to the presidential palace, everyone demanded President Mohammed Morsi’s downfall.

Chants condemning, mocking and harshly insulting Morsi and his organization, the Muslim Brotherhood, echoed across every major street in Cairo as the city was paralyzed by the marching masses. The thunderous mantra, “The people demand the regime’s downfall,” was the only scene reminiscent of the 18-day January 2011 uprising that toppled Egypt’s three-decade dictatorship of Hosni Mubarak.

In January 2011, hundreds of thousands of Egyptians held their ground in Tahrir Square until Mubarak resigned, but on June 30, significantly bigger crowds continued to occupy the square and hundreds of thousands occupied the streets surrounding the eastern Cairo presidential palace, a much anticipated scenario that forced Morsi to attend to his duties from the al-Quba Presidential Palace, a few miles away from where he usually appears.

“Morsi is gone, long gone in the hearts, minds and lives of Egyptians; he is nothing but a nightmare that we just awakened from,” said Mohamed Abdelhakim, a 36-year-old engineer who pledged to remain on the streets until Morsi’s downfall.

“Soon, he will be kicked out of our presidential palace; he will live and die in disgrace,” said Abdelhakim as thousands chanted, “Leave, leave.”

The massive crowd was joined by thousands who marched from Giza’s Boulaq district, a few minutes before meeting tens of thousands heading to Tahrir Square from Giza Square. None of the three marches arrived at their target destination, Cairo’s famous Qasr al-Nil Bridge that witnessed deadly confrontations between Mubarak’s riot police and protesters on Jan. 28, 2011, which today was blocked by crowds that extended for hundreds of yards into the square.

Passing by police stations and security checkpoints, protesters shook the hands of officers and soldiers who waved victory signs at the marching crowds.

“Everyone hates him, even his own police who are known for corruption and brutality; everyone wants him to resign,” said Emad George, a 29-year-old accountant. He continued, “The Muslim Brotherhood accused us of being remnants of Mubarak’s dictatorship; we showed them that we are Egyptians, Muslims, Copts, atheists, even Islamists who are ashamed of Morsi, and how he divided the country and stood watching as people killed each other.”

In Cairo, it wasn’t only Tahrir Square — every major square hosted thousands of protesters. Other cities including the Mediterranean coastal city of Alexandria, the Nile Delta’s Mansoura, Mehalla and Tanta; Suez Canal’s Port Said, Suez and Ismailia; and Upper Egypt’s Assuit, Sohag and Menya witnessed unprecedented numbers marching in locations that have become known as revolutionary grounds since January 2011.

Dozens of angry protesters attacked the Muslim Brotherhood headquarters in Cairo’s Moqattam district; they hurled Molotov cocktails and rocks at the well-barricaded building. Unconfirmed reports alleged that Brotherhood members fired live ammunition at the attackers, no injuries or deaths were reported.

Meanwhile, a press conference held at al-Quba Palace, where Morsi was forced to relocate on June 29, triggered more anger among protesters and the opposition leaders.

“Dialogue is the only language to reach common understanding,” he added. He further threatened, “The state will not tolerate any form of violence or breaking the law.”

He added, “The military is responsible for securing the borders, and the presidency does not need their mediation with political parties.”

As Fahmi read the presidency’s lax message, military helicopters continued to fly at low levels all around the capital, especially above Tahrir Square and the eastern Cairo palace, where hundreds of thousands had gathered.

Several opposition parties and movements including the Wafd Party, April 6 Revolutionary Youth and Tamarod [Rebel] Initiative, replied to the presidential statement by announcing their open-ended sit-ins until Morsi’s resignations.

“The Egyptian people will continue to pursue its revolution and impose its will that was clearly shown in liberation squares across Egypt.”

Hamdeen Sabahi, the Nasserite presidential candidate who competed with Morsi in the first phase of the 2012 presidential elections, sent a short, loud and clear message from Tahrir Square. “Morsi should willingly resign, or he will be forced to.”