Al-Monitor’s coverage of the pro-democracy movements in Egypt and Turkey. 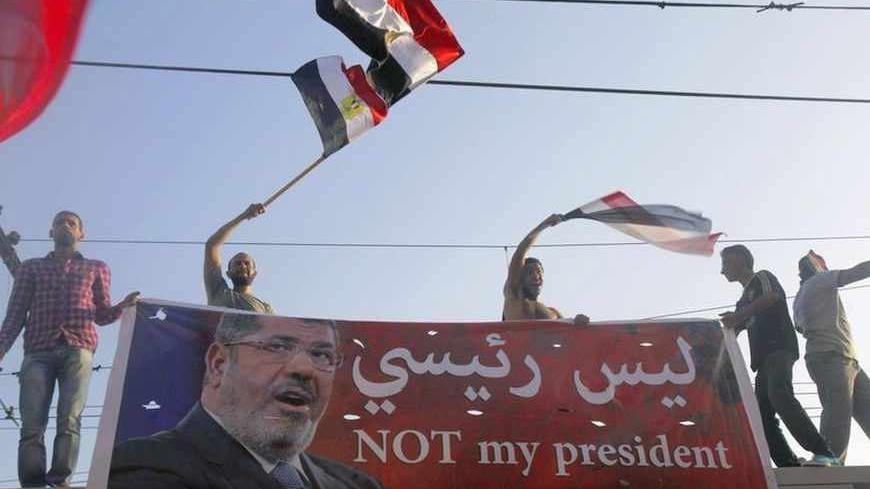 Protesters opposing Egyptian President Mohammed Morsi wave Egyptian flags and shout slogans against him and the Muslim Brotherhood during a protest in front of the presidential palace in Cairo, June 30, 2013. - REUTERS/Amr Abdallah Dalsh

The past week in the Middle East brought much-anticipated protests in Egypt and ongoing assessment of what the Taksim Square-Gezi Park protests mean for Turkey going forward.

Mohannad Sabry, reporting from Cairo, writes that the June 30 demonstrations against President Mohammed Morsi make the January 2011 demonstrations that brought down former president Hosni Mubarak “look like a minor protest”:

Passing by police stations and security checkpoints, protesters shook the hands of machine-gun-yielding officers and soldiers who waved victory signs at the marching crowds….

In Cairo, it wasn’t only Tahrir Square — every major square hosted thousands of protesters. Other cities, including the Mediterranean coastal city of Alexandria; the Nile Delta’s Mansoura, Mehalla and Tanta; Suez Canal’s Port Said, Suez and Ismailia; and Upper Egypt’s Assuit, Sohag and Menya, witnessed unprecedented numbers marching in locations that have become known as revolutionary grounds since January 2011.

Dozens of angry protesters attacked the Muslim Brotherhood headquarters in Cairo’s Moqattam district; they hurled Molotov cocktails and rocks at the well-barricaded building. Unconfirmed reports alleged that Brotherhood members fired live ammunition at the attackers; no injuries or deaths were reported.

The events of June 30 open a new chapter in Egypt’s volatile transition. Bassem Sabry summarized the state of play, arguing that Morsi’s remaining and only good option, if there is one, may be to call for early elections:

It is staggering to think how Morsi and the Brotherhood have obliterated so much of the goodwill that many people genuinely had for (or were willing to give to) them, largely in a single year. All the Brotherhood and Morsi (elected by only 51.7% with the indispensable aid of a revolutionary-Islamist coalition that has since fallen apart) had to do was to be transparent, inclusive, and focused on playing a mediating role between the country’s forces. Had they done that, they could have had a comfortable lock on the country within a year or two. Instead, they grew too certain of their strength and capabilities and of the weakness and disorganization of others, and in that the Egyptian people are unlikely to rise up again, at least not in such numbers.

Morsi also faces a challenge from Al-Nour, Egypt’s Salafist party, which left Morsi dangling by abstaining from the June 30 protests. Safa Joudeh writes that Al-Nour is seeking to capitalize by straddling the fence in the current conflict between Morsi and his secular opponents.

Mohannad Sabry provided further coverage of the Islamist challenge to government rule in the Sinai and how it is likely to go from bad to worse after June 30:

Within the span of a week in late June, the Rafah Central Security Barracks were twice targeted by unidentified gunmen; a rocket landed in the middle of the Sinai; a prominent tribal chief survived an assassination attempt by police forces; and two police sergeants were kidnapped. This string of events casts major doubts on the Egyptian army and the Ministry of Interior's soothing statements insisting that they have control over the restive mountainous peninsula, which has been the site of several significant blows to the country’s national security since the Jan. 2011 uprising.

Janne Louisa Anderson wrote about the role of musicians in the Egyptian protests, and how some have ridden the wave of popularity or have had reputations take a hit, depending on where they stood during the rebellion.

Al-Monitor contributing writer Kadri Gursel testified on June 27 before the US House Foreign Affairs Subcommittee on Europe, Eurasia, and Emerging Threats at its hearing “Turkey at a Crossroads: What Do the Gezi Park Protests Mean for Democracy in the Region?”

Gursel described the “social explosion” that occurred in Turkey as a result of the Taksim Square–Gezi Park protests, which have “washed out” the much cited “Turkish model” of the Justice and Development Party:

The uprising was a spontaneous popular movement without an organization and leadership. The lead actor in this movement is the well-educated, urbanized young generation labeled by the Turkish media as “the ’90s generation.” Most of these young people place themselves outside of established politics. According to polls, they cite restrictions on their freedoms, Erdogan’s authoritarianism, and police brutality as the main reasons behind their taking to the streets. What they demand most is their freedoms and ending the violations of their rights. The difference between them and earlier rebellious generations is that this time, their parents are behind them. They are for peaceful demonstrations, humor and nonviolence. They keep themselves informed and communicate by social media, led by Twitter.

Gursel described Turkey at a “junction” between authoritarianism and a new Turkey based on actual pluralistic democracy. He added that the protests had put the Turkish media on notice that it should not give in to the troubling trend toward government intimidation of the press and self-censorship among mainstream media organizations.