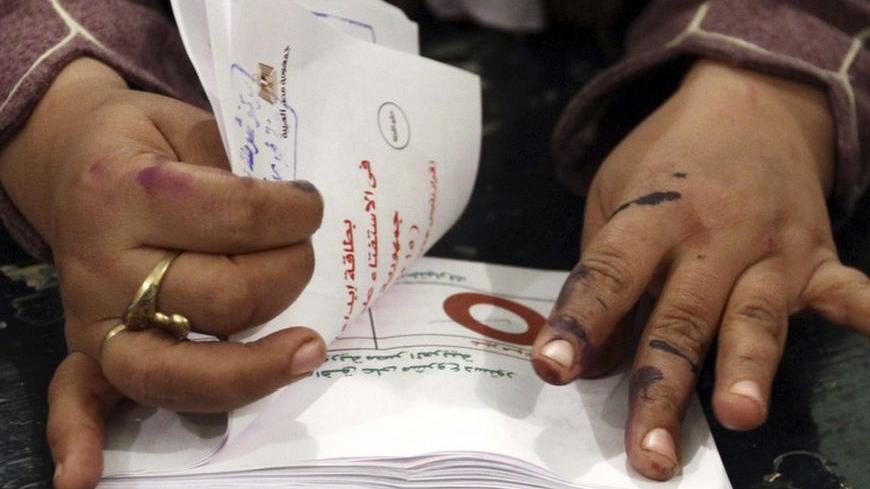 An official counts ballots after polls closed during the final stage of a referendum on Egypt's new constitution in Bani Sweif, about 115 km (71 miles) south of Cairo, Dec. 22, 2012. - REUTERS/Stringer

CAIRO — Egypt’s Higher Elections Commission announced Tuesday that Egypt’s constitution has passed by 63.8% of the vote, with turnout that reached only 32.9% of the country’s 51 million registered voters.

Out of the 16,755,012 valid ballots that were casted in nationwide and overseas polling stations throughout the two phases of the constitutional referendum, 10,693,911 voters endorsed the constitution while 6,061,101 voted against it.

The elections commission, composed of some of Egypt’s higher judges, confirmed at its Tuesday news conference at the State Information Service Center in Eastern Cairo that it had “looked thoroughly into all and every violation claim throughout the referendum.”

Judge Samir Abul Maati, head of the commission, who announced the results of the referendum, confirmed that “the ballot boxes suspected of being inaccurately administrated or were marred by serious irregularities were all discarded.”

The low turnout was blamed on President Mohammed Morsi’s decree, which was passed down on Dec. 11 or four days before the referendum, banning voters from casting their ballots except in their home constituencies; and, on nationwide boycotts of the referendum by judges in protest of Morsi’s Nov. 22 decree that granted him broad, unchecked powers, which left polling stations with few supervising judges and thousands of voters, and limiting the voting to only one day which kept millions of voters across the country from casting their ballots.

According to the results, the post-revolution constitution which overwrites the 1971 constitution, under which Hosni Mubarak’s dictatorship operated for 30 years, garnered fewer votes than the 13 million that made Mohammed Morsi the first elected president of Egypt.

The breakdown of "Yes Vote," which has been fiercely advocated for weeks by a front of Islamist powers led by Morsi’s Muslim Brotherhood movement, over Egypt’s governorates was quite similar to maps of illiteracy and poverty levels published by state-owned research institutes.

The controversial draft constitution, which was put to referendum by Morsi despite massive protests and violent clashes that erupted after his Nov. 22 decree, garnered the greater portion of its endorsement votes in the governorates of Upper Egypt that occupied top ranks of illiteracy and poverty.

Other provinces weren’t on the most recent maps of Egypt’s nationwide illiteracy and also had an overwhelming majority of ‘Yes Votes,’ but the number of registered voters and turnout was significantly lower than the numbers scored in illiterate provinces.

Marsa Matrouh, Egypt’s western governorate bordering Libya and a stronghold of the country’s conservative Salafists, was the top among provinces that endorsed the constitution with 91.8% of its turnout, the shockingly overwhelming percentage made up only 68,119 voters. El-Wadi El-Gedid, another western province ranking third among endorsers, had 87.2% approval among a total of only 38,551 voters.

As for poverty statistics, another study of multi-dimensional poverty published by CAPMAS in December 2012 showed that several of Egypt’s most impoverished governorates were among the top endorsers of the constitution.

According to the study, Upper Egypt’s Beni Suef ranked first on the poverty list with 20.7% impoverished citizens and endorsed the constitution with 85% of its registered votes; coastal Ismailia came second on the poverty list with 18.2% and endorsed the constitution with 70%, Assuit was third with a 17.3% poverty rate while its endorsement reached 76.5%; and Menya, fourth-most impoverished governate with 15.3% of its citizens impoverished, polled an 83.2% yes vote.

Several independent human rights organizations and advocacy groups that took part in monitoring the referendum accused the Islamist current of manipulating votes by using religious propaganda in illiterate and impoverished provinces. Dozens of complaints were filed during the voting accusing members of the Muslim Brotherhood’s Freedom and Justice Party and other Islamist powers of directing voters in and around polling stations.

The elections commission indicated that “it is only responsible for the polling stations and a surrounding perimeter of 200 meters.”

Meanwhile, the country’s infuriated opposition didn’t wait for the official results to reconfirm its total refusal of the constitution.

The newly formed National Salvation Front, a coalition of opposition parties, tagged the voting process as “illegitimate” and pledged “to use all peaceful measures to bring down the constitution that doesn’t represent national consensus.”

The opposition forces, which only came to unity by Morsi’s latest decisions that triggered the worst political crisis Egypt has lived since the January 2011 uprising that toppled Hosni Mubarak’s iron-fisted regime, seemed to not yet have a precise plan for trashing the Islamist-backed constitution.

Despite not reaching a decision to either boycott or participate in the looming parliament elections, the NSF announced “forming a parliamentary elections front and aiming for a majority of the coming parliament through running on one unified opposition list of candidates.”