Egyptians vote yes, for many reasons

Egyptians said "yes" to the new constitution for many, widely different, reasons. 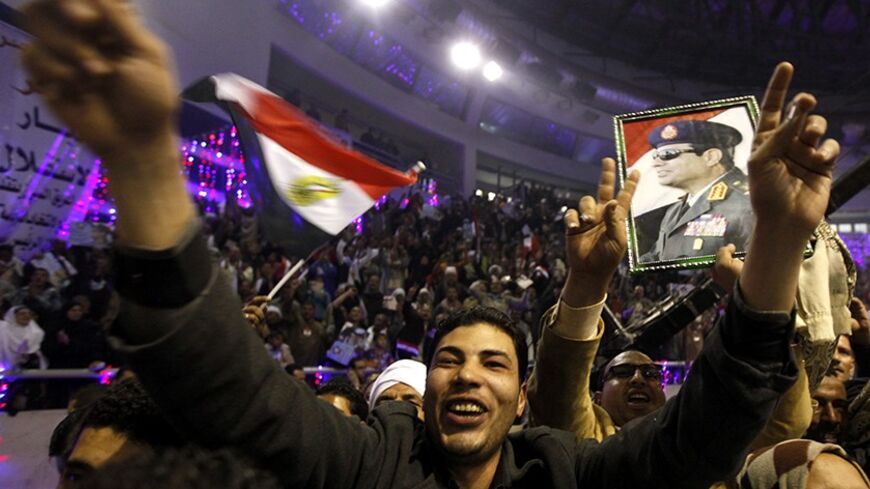 Egypt’s referendum on the new constitution was approved by a staggering 98.1% of the voters. US Secretary of State John Kerry said in a statement: “It’s not one vote that determines a democracy, it's all the steps that follow.” He pointed to challenges and criticism outlined in the preliminary assessments of Democracy International and The Carter Center.

Around 20 million Egyptians voted in favor of the constitution, double the number of those casting the very same vote but for a different, more conservative constitution barely a year ago. More importantly, if this referendum is considered a legitimacy test for the post-Brotherhood era and a vote of confidence for the new military-sponsored road map, where are the 10 million voters who approved Mohammed Morsi’s constitution a year ago and supported the Muslim Brotherhood rule? Did they boycott the 2014 referendum?

For a start, the 63% who voted in favor of the Brotherhood’s constitution in 2012 were not necessarily hard-core Brotherhood supporters. As explained in this Al-Monitor article, the pro-stability bloc is quite large and tends to support a sitting government — motivated by a desire for things to move forward, hoping that a “yes” vote will improve the economy and the belief that the government is unlikely to put forward a seriously flawed document. Some analysts believe that there must be a very small overlap between the voters who participated in last year’s referendum and those who did last week. I believe otherwise. Participation in elections is a habit. Most people who participate are more likely to always do so, while those who do not cast their vote are less likely to vote in the future unless a major change takes place in the political environment. If the pro-stability bloc said “yes” to Morsi’s referendum without much enthusiasm in December 2012, as demonstrated by the relatively smaller turnout rates (overall turnout was 32% in 2012 compared to 39% last week), the same bloc was twice as enthusiastic this year. Because when it comes to stability, for most Egyptians the army scores higher than any single political party, movement or coalition.

All along, it was safe to assume that the Brothers and their supporters would reject the new constitution. But they boycotted the referendum for a number of possible reasons. First, they likely wanted the “yes” vote to be too high, to not be credible. They also wanted to avoid a participation that may reveal their current diminished support without the backing of the army. The organization’s mobilization capabilities have severely been damaged with the arrests of many of its leaders and middle ranks and also with the freezing of assets of its charities and wealthy members. The Muslim Brotherhood can always tell its members that a boycott sends the message of them not recognizing the legitimacy or authority of those running the referendum, its results or the road map as a whole. Finally, they can tell the West, “We told you so. Look at this 98% and weep for the sort of democracy enjoyed under Morsi when the support for the constitution was a plausible 63%.”

No matter how one tries to explain it, it is still hard to believe that 98.1% of voters supports a single direction. One reason for this outcome are the intensive media and advertising campaigns asking people to participate and cast a “yes” vote, in the absence of any serious mobilization of a “no” vote. Virtually all “independent TV networks” in Egypt were persistent in mobilizing their audience for a “yes” vote, to the extent that some people became fed up and decided to boycott or even vote against as a result. Clearly, there weren’t too many of those.

But there was another reason why so many Egyptians voted for, rather than against, the constitution, including those who had serious reservations on some of its articles. In the referendum, many Egyptians saw a question that was not even on the ballot paper. Instead of, “Do you support the new constitution?” they perceived the question to be, “Do you support the continuity of the Egyptian state?” Egyptians sensed that their state’s own survival was at stake. They looked at the havoc attributed to Islamist movements and sectarian politics that is tearing apart countries such as Syria, Sudan, Libya, Palestine, Afghanistan, Somalia, Iraq and even Lebanon and made a connection with recent terrorist attacks in the Sinai Peninsula and other parts of Egypt.

Egyptians felt they must do everything possible to prevent Egypt from sliding down the same slippery path. They were determined to deny the Muslim Brotherhood any claims of legitimacy — claims that the Muslim Brotherhood could use internally to change public opinion and externally with a little help from friends such as Turkey, Qatar and others, in lobbying the international community to pressure Egypt to restore the Brotherhood’s rule, should a “no” vote have prevailed. Consciously or subconsciously, Egyptians felt that their country is facing an existential threat, and they acted accordingly. The feverish media campaigns against the Muslim Brotherhood as a part of the “war on terror” helped amplify this perception leading to an overwhelming vote of support that usually occurs in a time of war.

Behind the extremely high level of "yes" votes, deservingly stand Egyptian women who are the biggest winners of the new constitution and of limiting conservative and extremist Islamist influence on the state, its institutions, policies and legislation. It was shocking to many observers to see expressions of joy and jubilations from Egyptian women during the referendum. Some women wearing the hijab publicly danced after casting their “yes” vote. A scene that is rather unusual in Egypt. Other women took “friendly” photographs with army officers and soldiers guarding the polling stations, which they proudly posted on their social networking profiles.

Several reports and conversations on social media implied that the youth turnout was very low as a sign of protest against a return to what they saw as Mubarak-regime tactics of the heavy handling of university students by police, detention of activists — such as Alaa Abdel Fattah, Ahmed Maher and Ahmed Abou Douma — and media attacks against the January 25 Revolution. Calling it “naksa,” the same label used to describe Egypt’s defeat in the Six-Day War in 1967, has angered activists, revolutionaries and youth who claim this popular uprising as a historic achievement of their own generation. We had warned in a previous article of the dangers of a rift taking place between June 30 and January 25 supporters, especially since the June 30 protest had originally been organized by January revolutionaries starting in November 2012, immediately following Morsi’s announcement of his dictatorial decrees. There are no exit polls or reliable data to support the demographic claim of low youth turnout. “Foloul,” Mubarak-regime supporters and others suggest that this claim is elitist and limited to media-crazed activists while most Egyptian youth participated. But while youth boycotting the referendum may not be a statistical reality, the trend is surely noticeable on social media as well as in real life. The extent of the dissent may still be minor, but it is centered around activists whom can each mobilize and attract many others.

Rightly fearing the consequences of this trend, Gen. Abdel Fattah al-Sisi said that there will be no turning back or resurrection of the “old faces,” possibly as a warning to some of the old National Democratic Party guards who reappeared in the public arena thinking that perhaps there is a looming reversal of fortunes in their favor. The government met with several youth revolutionary coalitions to hear their views, possibly to prevent escalation that could start a new wave of protests during the commemoration of the January 25 Revolution later this week. After witnessing several presidents and cabinets deposed by popular uprisings in Egypt, it would be wise for governments to respect the power of the people.