The meanings of Egypt’s referendum

Egypt's new constitution is more progressive than its predecessors. 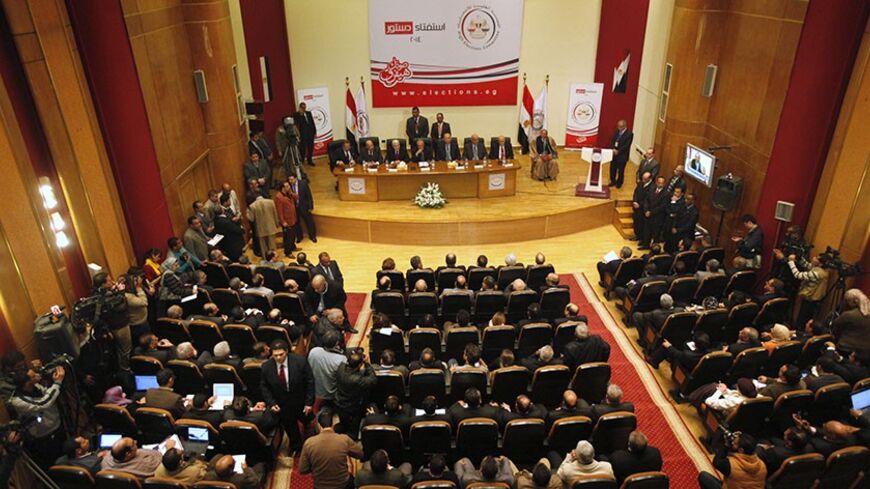 As the dust begins to settle after Egypt’s third constitutional referendum in three years, this time passing what are officially constitutional amendments but in reality is a brand new constitution, two broad narratives are emerging. The first narrative, predominantly local, positively presents the totality of everything that is taking place in regard to the vote and the country, a triumph for the goal of real democracy and the values of modernism. The second narrative proclaims the death of democracy and the end of everything that has to do with the January 25 Revolution and its lofty goals. The reality, one leans to believe, is more complex and multilayered. It is also still developing, most obviously.

Let's start with some basic facts and figures. Official overall voter turnout in the 2012 parliamentary elections stood at 54%, while voter turnout for the 2012 presidential elections was 46.4% in the first round and 52% in the second. The 2011 constitutional referendum, which came at the height of post-revolution national enthusiasm, witnessed a turnout of just over 41%. Most importantly and tellingly, at the time of the 2012 constitutional referendum — which saw a large-scale mobilization on both sides of the political fray and heated campaigns in favor of and against the charter — the total turnout only reached just over 32%, with 36% of voters casting a "no" vote. In the 2014 referendum, official voter turnout figures stood at 38.6% (thus somewhat higher than the 2012 referendum turnout), which culminated into what was simultaneously an odd sounding and resounding support percentage of 98.1%.

Two things come to mind. First, while some make the argument that voter turnout was low compared to other referendum results, the turnout was actually substantial and sufficiently reassuring for the authorities in particular. Second, while some automatically assumed rigging and fraud given the ostensibly high-approval percentage, there has not been any real evidence of something earth-shattering thus far. Instead, this figure of unanimity was also the result of the boycott of the naysayers, predominantly by the Muslim Brotherhood and its supporters as well as some degree of boycott by non-Brotherhood sympathizers who object Egypt's current state of affairs. There was also a tremendously omnipresent “vote yes” campaign, while no clear “vote no” campaign saw the light of day, whether out of lack of initiative or lack of allowed space, if not potentially a bit a both.

Four particular phenomena have been discussed in the media regarding the referendum. The first is what is regarded as a high turnout by women, while the second are the seemingly honest manifestations — at least if in part — of jubilation and festivities in the voting lines, often with nationalist and pro-army music playing in the background. The third phenomenon, and a particularly comforting sign, was the absence of process-derailing violence. The fourth, and a point of much contention, is an allegedly low turnout by youths. While to my knowledge there are no exact statistics or exit polls on the turnout breakdown, the prominent media discussion of the alleged low youth turnout as some incontestable fact — especially given how the media has strongly been in support of the current transition and process — suggests that there is at least some smoke, even if not necessarily an outright fire.

But nonetheless, the final tally and result remains predominantly encouraging for the authorities in Cairo and strongly discouraging for the Muslim Brotherhood — who have already claimed the vote was rigged — especially as turnout and percentages were key in the rhetorical battle surrounding legitimacy and popular support, both locally and internationally. The current authorities in Cairo will definitely feel further emboldened in their current course, politically and in terms of security. After all, the vote was not only seen as a vote on the draft constitution but it was also significantly viewed as a vote on the current political order, as well as a test of the current administration’s capabilities of securing the country during such a challenging and key national event. Conversely, many make the argument that the vote was a test of Gen. Abdel Fattah al-Sisi's popularity, but I do not entirely buy into that argument just yet.

There is much to be concerned about in the coming period. Would the extremes of nationalism ebb or flow, would dissent be further tolerated or not on popular and official levels and would Egypt’s security apparatuses decidedly return to their Hosni Mubarak-era ways? Would the upcoming electoral processes and political environment be substantially competitive, inclusive and representative? What will be the fate of the January 25 Revolution and its narrative and perception as well as the fate of its activists, some of whom have been or are still involved in controversial legal proceedings? What about Mubarak's fate and the trials of Mohammed Morsi and Muslim Brotherhood figures? Would the media relax a bit? Would there be any degree of transparent and just investigation into all the events and violence since July 2013? Would violence continue and grow worse, and would the economy improve or slide down further? Would the national rifts heal in one way or another? These are some of the questions that are out there. While it would be impossible to be decidedly certain about almost anything right now and in the near future, the image is not as bleak as some paint it to be.

For example, some are trying to make the argument that the voters in the 2014 referendum were nothing more than media-brainwashed masses, but that would be a disastrous assumption and mistake. Discussions with supporters of the constitution generally show a breadth of opinion and reason for endorsing the document, ranging from the impassioned and nationalist, the argumentative and detailed, to the seemingly more often pragmatic and practical, with many simply hoping to move forward with the country, for a chance at stability after three tumultuous years. What is most important is they all know that their vote matters and is crucial.

One can make arguments about the death of the January 25 Revolution, but the fact that large numbers of Egyptians know that their vote and opinion is crucial is one paradigm-shifting gain of the uprising that remains strongly alive despite all the imperfections of the current reality. Any political power hoping to rise and remain in power can no longer afford to resort to the Mubarak-era mass rigging ritual of the “stuffing of the ballot” boxes. Instead, they need voters, and they need to deliver to these voters. The public at large — beyond those who voted — remains increasingly more knowledgeable and more intensely engaged than ever, in one form or another. And the remarkable reality of the past three years in Egypt is that the successive landmark moments and votes have shown a highly dynamic public, substantially unpoliticized and willing to experiment across the spectrum, willing to change opinion, and one that is also growing increasingly impatient with good reason.

This new constitution is not perfect — its evolutionary process was controversial — and at least a few amendments would be welcome. But it is also arguably substantially more progressive than its predecessors and provides a good base to move forward upon in the coming period, especially if its articles of rights and freedoms are taken seriously and hopefully become manifest and entrenched. I don’t think this will be the way it was in 2010 or 2005, or even in the 1950s or 1960s, as some might argue. I believe this will be — for better or worse — the new experiment of 2014, whose outcome is yet to unfold and become clear.