Morsi’s Opponents Fear Losing The Battle Over the Constitution

As protests continue across Egypt, members of the opposition fear they may lose the battle over Egypt’s draft constitution, reports Mohannad Sabry from Cairo. 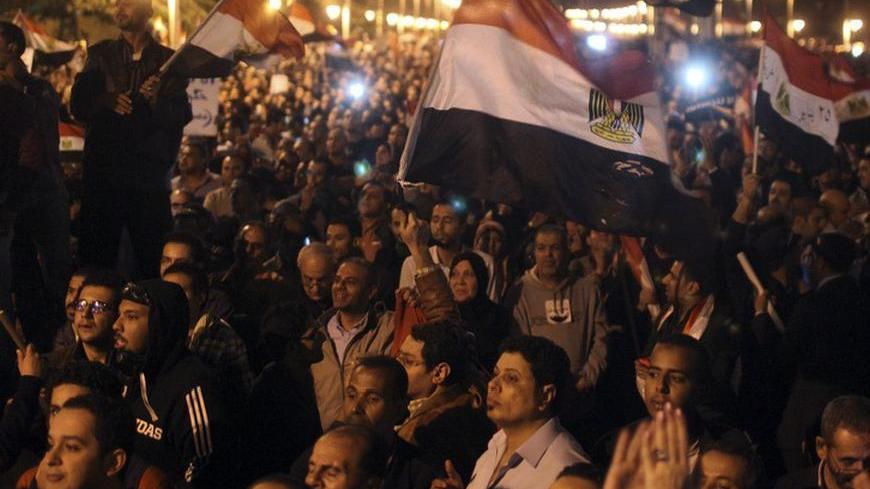 CAIRO — A statement published by Egypt’s newly formed National Salvation Front on Dec. 2 described President Mohammed Morsi’s call for a constitutional referendum as “irresponsible” and accused him of “reneging on his oath not to schedule it before reaching a broad state of national consensus over the constitution."

“The president preferred to act as a party member than as a president to all Egyptians,” said the statement, as tens of thousands of protesters gathered Tuesday in front of major mosques across the capital before marching to the presidential palace in eastern Cairo.

Barbed-wire barricades erected by the military to seal off streets leading to the palace were torn down by demonstrators  infuriated by the exceptional security measures that weren’t equally applied when a massive support rally built a stage and chanted freely at the walls of the heavily guarded mansion. Security forces withdrew after minor skirmishes.

Live footage by several local TV channels showed dozens of protesters surrounding a riot police vehicle and several soldiers to protect them from violence by others in the crowd, a spectacular scene given the hundreds of bloody clashes that took place between protesters and police forces over the past 23 months since the Jan. 25 uprising.

Meanwhile, a few thousand demonstrators joined dozens of strikers who have slept in their makeshift tents in Tahrir Square since Morsi’s constitutional declaration that granted him his expansive, unchecked powers on Thursday, Nov. 22.

Crowds of anti-Morsi demonstrators in both Tahrir Square and at the presidential palace on Tuesday were significantly smaller than those that rallied on Saturday in support of the president’s controversial decisions.

Mohamed Abbas, a revolutionary youth figure, founder of the Egyptian Current Party, and a former member of the Muslim Brotherhood movement who was sacked among dozens of youth who opposed the organization’s post-revolution policies, explained to Al-Monitor why Egypt’s secular and revolutionary powers are deflating and almost incapable of trashing the constitution in a referendum scheduled to take place on Saturday, Dec. 15.

“The appearance of Mubarak-era figures and affiliates of the former military government in Tahrir Square was used by the Islamist current in waging a powerful smear campaign against the opposition,” said Abbas.

He referred specifically to Sameh Ashour, head of the Lawyers Syndicate who chaired an advisory council to the interim military government that ruled between Hosni Mubarak’s ouster in February 2011 and Morsi’s inauguration in June 2012, and Sayyed El-Badawi, chairman of Wafd Party that struck several electoral deals with Mubarak’s National Democratic Party in 2005 and 2010.

“In addition to their claim of defending Islamic Shariah, which sounds very appealing to millions of impoverished citizens who are illiterate or politically uncultured but naturally conservative,” said Abbas.

He admits there are major divisions among the opposition bloc, which is apparent in the National Salvation Front that doesn’t include his Egyptian Current Party, the powerful April 6 Youth Movement and other revolutionary movements, but includes Amr Moussa, Mubarak’s long-time Minister of Foreign Affairs.

“Some political parties delusionally believe they can cancel the referendum while others continue to call for boycotting, a policy that failed miserably during the March 2011 referendum and the parliamentary elections.”

The referendum on a transitional constitutional declaration held by the then-ruling Supreme Council of the Armed Forces in March 2011 was also promoted by Islamist currents as the defense line to Egypt’s Islamic identity and passed by 77.2% of the 18.5 million voter turnout.

In the November 2011 parliamentary elections, the Muslim Brotherhood’s Freedom and Justice Party and the Salafist Nour Party dominated around 73% of the 498 seats. Both parties scored around 19.5 million votes out of the 54% voter turnout, an estimated 30 million voters.

Some local politicians said the only chance of bringing down the disputed constitution is by miraculously uniting the supporters of Morsi’s four top challengers in the first round of the May 2012 presidential elections. A total of around 16.6 million voters that went to the Mubarak Aviation Minister Ahmed Shafiq, the Nasserite Hamdeen Sabahi, the Muslim Brotherhood defector Abdelmonem Abolfotoh, and the former Arab League Secretary General Amr Moussa.

Abbas, who believes that nothing will help Egypt’s opposition but powerfully promoting the “vote NO message,” says that the anti-Morsi voters in the presidential elections are almost impossible to unite.

“Salafists endorsed Abolfotoh and are now backing Morsi within the Islamist front, while the remnants of Mubarak’s era who endorsed Shafiq or Moussa are divided over the constitution into those who fear the political isolation law and others who won’t be affected and want immediate stability to resume their stalled lives and businesses,” said Abbas.

The argument over the negative impacts of boycotting didn’t sway those who continue to promote boycotting since last year’s parliamentary elections.

Tarek Shalaby, a prominent activist and hard-core advocate of boycotting says he is “still leaning toward another boycott campaign during the upcoming referendum.”

“The military government and Islamists sought legitimacy through the March 2011 referendum and I regret giving it to them. This time I will be legitimizing Morsi and the military that is taking cover under this tailored constitution,” Shalaby told Al-Monitor, referring to articles of the constitution that allow military trials of civilians and continue to tighten the lid on secrets of a great portion of Egypt’s economy owned by the military institution.

“Those who think boycotting never accomplished anything should think where participation got us,” says Shalaby who insists that participation in all of the “so-called democratic processes since Jan. 25, has hindered the revolutionary efforts instead of pushing it forward.”

Shalaby, who says his tendency to boycott might change, agrees the constitution will most certainly pass. “It’s hard to speculate but I think it will pass by about 65%.”

“We are facing an unfaltering campaign promoting the protection of Islamic Shaiah, the stability of economy, in addition to threats that rejection means a continuation of Morsi’s now unlimited, unchecked powers.”

Despite the agreement on the impossibility of winning the Dec. 15 constitutional battle against the unchallenged organization of the Islamist bloc, Haitham Mohamadein, a leader of Egypt’s Revolutionary Socialist Movement sees major political gains reaped by the opposition.

“It’s clear that Morsi’s opposition continues to rise after five months in office,” said Mohamadein, a member of the Revolutionary Socialist’s political office who has been sleeping in a tent at Tahrir Square since the political crisis kicked off on Friday, Nov. 23.

“The constitution passing by a slim margin will be a solid indication that it doesn’t represent Egyptians. It will boost the opposition’s confidence, who I believe will soon revolt against the president and government that, through this constitution, will not protect their rights, freedoms or enhance their living standards.”

The socialist, law-school graduate says if the constitution fails, “it will be the big blow to Morsi and his supporters of the Islamist bloc and will pave the way to forcing the president into withdrawing his constitutional declaration and imposing the people’s revolutionary will.”

“That will only happen if all of the opposition powers unite their leadership, members and message, which is not happening until now,” said Mohamadein.