Mohammed Morsi takes to the state-run TV airwaves to reiterate his defense of his presidential decree that granted him sweeping, unchecked executive powers, Mohannad Sabry reports for Al-Monitor. 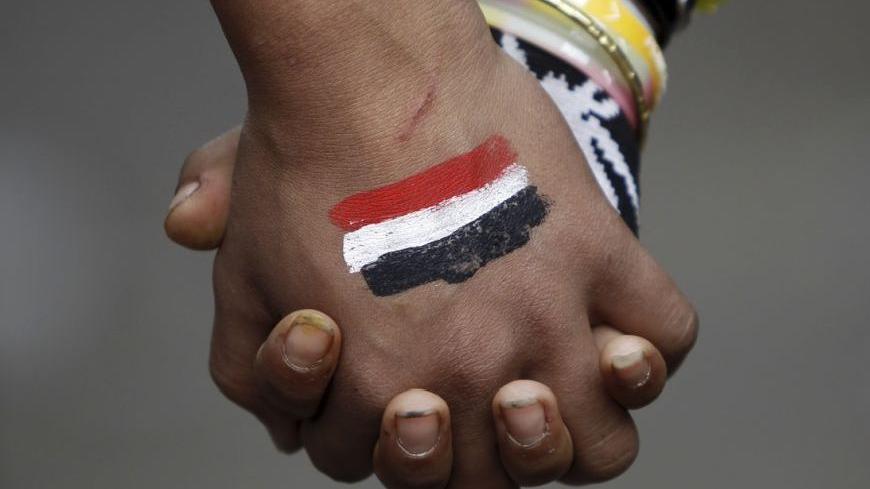 Anti-Morsi protesters, who want a peaceful demonstration, join hands as they try to stop clashes and rock-throwing at riot police along a road which leads to the US embassy, near Tahrir Square, Nov. 29, 2012. - REUTERS/Amr Abdallah Dalsh

“I am very happy that we, Egyptians, are expressing what we feel and demanding what we want. It’s a positive and healthy scene,” Morsi said. “But I regret seeing the remnants of the former regime infiltrating the revolutionaries.”

“Dismissing the prosecutor general fulfills the demands of the public and the revolution, it was late due to the current circumstances but I saw that it could not be delayed anymore. Its equivalent to the retrials of former regime figures, and therefore this declaration fulfills revolutionary demands,” said Morsi. “I consult advisers inside and outside the presidency, known and unknown ones, before taking decisions, but I personally take the decision and take responsibility for it.”

“The constitutional declaration is very temporary, until the legislation is returned to the parliament,” said Morsi.

Morsi's second appearance in seven days coincided with an internal vote held by the disputed 100-member Constituent Assembly on the latest draft of the constitution. The sudden vote comes less than a week after Morsi’s exceptional extension of the assembly’s working time-frame by two more months, which he described last week as “time necessary for the completion of the constitution.”

The vote was announced late on Wednesday by the assembly's chairman, Judge Hossam El-Gheriany, whose decision to suddenly put an end to six months of disputes over articles of the proposed constitution shocked the resigning assembly members and dozens of secular political powers and revolutionary movements. If the draft is passed by the assembly on Thursday, it will be put out for a public referendum within a few weeks.

“The assembly and its vote are both illegitimate; it is not writing a constitution but its building a new dictatorship,” said Mohamed Adel, spokesman of April 6 Youth Movement, which continues to hold a sit-in it started at Cairo’s Tahrir Square since Nov. 23, in protest of Morsi’s constitutional declaration that granted him immunity from all state bodies including the judiciary.

Adel told Al-Monitor: “Morsi, the Muslim Brotherhood and their Islamist affiliates are forcing the public to choose between a dictatorial constitutional declaration or a constitution that only represents them and serves their interests. I tell them that the Egyptian people will make its options and force it over everyone including the president.”

The draft constitution, which is being voted on by only 85 members of the assembly after the resignation of several members and the withdrawal of Egypt’s Orthodox, Catholic and Anglican churches, included a law that bans leading figures of Hosni Mubarak’s now-dissolved National Democratic Party, NDP, “from practicing politics or running for parliamentary or presidential elections for 10 years.”

Article 232 read that “leading figures of NDP means anyone who was a member of party’s general secretariat, political committee, political office, or was an NDP member of parliament or upper parliament during the two terms prior to the January 25 revolution.”

Several articles of the draft constitution failed to fulfill what most of Egypt’s revolutionary powers considered main demands of the January 25 uprising that brought an end to Hosni Mubarak’s dictatorship.

Articles regarding Egypt’s armed forces were some of the most controversial. It allows military tribunals for civilians “in cases of crimes that harm the armed forces, the law specifies such crimes.”

“This constitution is absolutely unrepresentative of the revolution,” said Mohamed Abbas, founder of the Egyptian Current Party and member of the Revolution Youth Coalition.

“The only article of this constitution that addresses the revolution demands is the political ban on members of Mubarak’s National Democratic Party,” said Abbas whose party continues to strike at Tahrir Square in protest of the Morsi’s constitutional declaration.

“Morsi is mistaken if he thinks that putting the constitution to a referendum will solve the crisis he instigated with his decisions last week.”

The National Salvation Front, which was formed last Thursday in reaction to Morsi’s declaration and includes former 2012 presidential candidates Hamdeen Sabahi and Amr Moussa and former head of the International Atomic Energy Agency, Mohamed El-Baradei, held an emergency meeting on Thursday to discuss means of escalation in protest of the sudden vote on the draft constitution.

“The strike by judges is a first step on the way to a general strike that could escalate to a nationwide civil disobedience if attempts of hijacking Egypt continue,” said the National Salvation Front’s statement that was read on-air by Wahid Abdelmegid, resigning member of the Constituent Assembly.

“Our calls were confirmed by Tuesday’s million-man protest in the face of tyranny; a day of popular rejection to the constitutional declaration.”

Dozens of liberal, democratic and leftist political parties and youth movements called for a massive protest at Tahrir Square on Friday, all of which are now calling on Morsi to not only withdraw his constitutional declaration, but also to dissolve the Constituent Assembly which continues its vote on the disputed draft constitution.

Meanwhile, the Muslim Brotherhood movement and its political arm, the Freedom and Justice Party, the Salafist Nour Party and several other Islamist currents have once more changed their provocative plans of leading massive marches to Tahrir Square, where Morsi’s opposition have been striking for a week. The pro-Morsi rally will be held in the Renaissance Square in Giza.

“Our decision to move our demonstrations in reaction to initiatives by national figures is a message that we are not seeking confrontations,” said a statement by Mohamed Saad El-Katatni, chairman of the Freedom and Justice Party, published on the Muslim Brotherhood’s website.