Morsi Refuses to Back Down As Thousands March on Tahrir 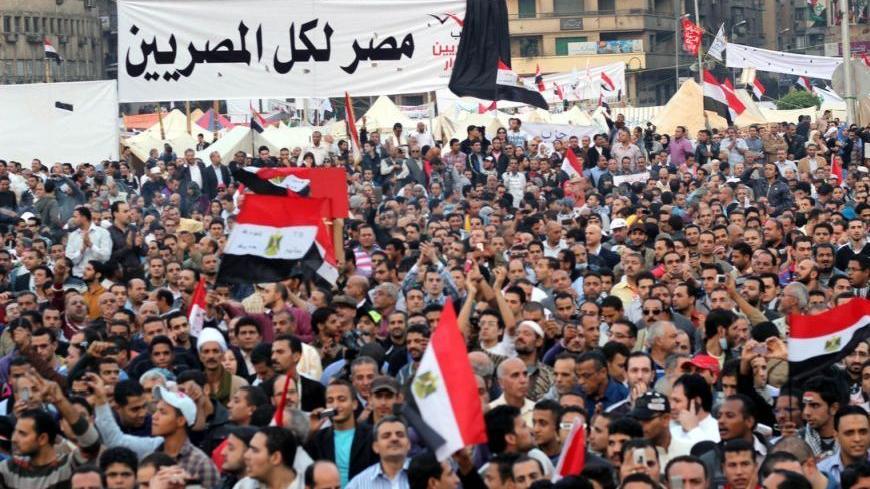 A banner saying "Egypt for all Egyptians," hung in the middle of Cairo's Tahrir Square where tens of thousands of protesters called on President Morsi to withdraw his latest constitutional declaration that granted him massive, unchecked executive powers. - AL-MONITOR/Mohannad Sabry

CAIRO — Tens of thousands of protesters marched in Tahrir Square on Tuesday in what looked like a replay of the January 25 uprising that toppled Hosni Mubarak’s 30-years dictatorship.

The protests were in reaction to President Mohammed Morsi’s insistence to uphold the constitutional declaration he passed last Thursday [Nov. 22] which granted him immunity from all state bodies, including the judiciary.
The Muslim Brotherhood, the affiliated Freedom and Justice Party, the Salafist Front and several other Islamist groups announced calling-off their million-man demonstration on Tuesday. A Brotherhood statement said “demonstrations were canceled to avoid any possible confrontations and bloodshed.”
A meeting between Morsi and Egypt’s Supreme Judicial Council on Monday evening failed to persuade the president to withdraw or at least amend the declaration through which he assumed sweeping executive powers and granted immunity to both the disputed Constituent Assembly and the remaining upper house of the now-dissolved parliament. The presidential statement following Morsi’s meeting with Egypt’s highest judicial authority wasn’t much different from what he told crowds of supporters from a stage erected by members of the Muslim Brotherhood at the walls of the presidential palace last Friday.
“The president confirmed that the immunity granted to the president’s declarations, laws and decisions is restricted to matters of sovereignty and is temporarily effective until a constitution is passed and parliament elections are held,” said the presidency’s official statement on Monday.
Yasser Ali, the presidential spokesman, confirmed after the meeting that “the statement was agreed upon by every member of the Supreme Judicial Council,” yet, the council did not publish a statement of its own.
Egypt’s Judges Club condemned the latest statement and confirmed that it “will continue its escalation and take all necessary measures to protect the state of law, the independence of judiciary and rights and freedoms of Egyptian people.”
The Judges Club renewed its calls on judges and prosecutor offices to hold a general strike. Several political parties and revolutionary movements called on Morsi “to amend the controversial declaration in accordance with the public will, warned of further chaos and called on the Muslim Brotherhood Movement to understand how dangerous the situation has become.”
Ahmed Maher, general organizer of the revolutionary April 6 Youth Movement proposed that “President Morsi cancels the constitutional declaration except for the public demands of sacking the prosecutor general and holding retrials for those linked to the killing of protesters during the January 25 revolution.”
“The Prosecutor General should be appointed by the Supreme Judicial Council, not by the president. President Morsi, who is capable of containing the situation by canceling the declaration, takes all blame for any further bloodshed,” warned Maher in an official statement published by April 6 Youth Movement.
The presidential statement, which, by law, is not considered a presidential decree, a constitutional declaration or an addendum to the declaration passed last week, failed to absorb the public’s anger or diffuse calls for massive demonstrations Tuesday.
“We will continue to escalate and we refuse any dialogue with President Morsi until the constitutional declaration is withdrawn,” said Khaled Abu Bakr, a prominent Egyptian lawyer who represented families of revolution victims during the trial of ousted President Hosni Mubarak.
“Those thousands demonstrating are representative of the whole country, they do not belong to any party or movement, their demand is an immediate cancelation of the declaration and the president should obey the people’s will,” Abu Bakr told Al-Monitor while marching among thousands of protesters from Cairo’s upscale Mohandessin neighborhood to Tahrir Square. “Another revolution is about to breakout and if the president doesn’t listen to the people then I don’t know who he listens to.”
“Leave, Leave!” a chant that once called Mubarak to step down during the January 25 uprising in 2011, echoed Tuesday at the iconic Tahrir Square where tens of thousands of protesters gathered and waited for several massive marches to arrive from neighborhoods across the capital Cairo.
“This is enough, it’s unacceptable that he grants himself unlimited powers, full immunity, and ignores thousands protesting against him,” said Khaled El-Etr, a 37-year-old accountant who stood in Tahrir Square carrying a banner emblazoned with foul language criticizing Morsi.
“Our message is clear, respect the will of those who elected you and fulfill their demands, withdraw the shameful declaration,” said El-Etr. “If you don’t listen to the people now, then you will hear them tomorrow demanding your downfall.”