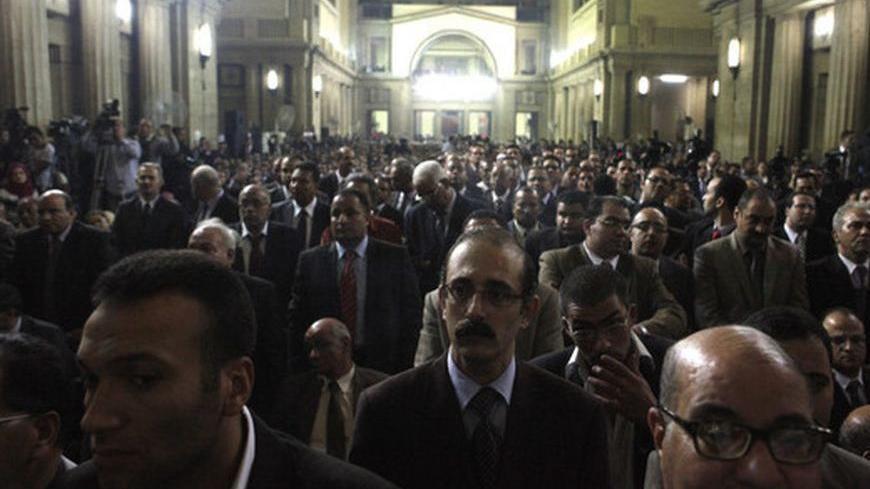 Judges attend a meeting at Egypt's Judges Club in Cairo, Nov. 24, 2012. Egyptian President Mohammed Morsi faced a rebellion on Saturday from judges who accused him of expanding his powers at their expense, deepening a crisis that triggered calls for more protests following a day of violence across Egypt. - REUTERS/Asmaa Waguih

CAIRO _ The Muslim Brotherhood called on its members and supporters across Egypt to stage massive demonstrations on Sunday, Nov. 25, in support of President Morsi’s declaration that granted him unprecedented executive powers, while dozens of other political figures and parties declared a National Salvation Front and suspended all dialogue with the presidency until the declaration is annulled.

The Freedom and Justice Party, which Morsi chaired until he was announced president on June 28, published a statement applauding the declaration expanding his powers and granting him immunity from any state bodies, including the judiciary.

"The constitutional declaration fulfilled a lot of demands by popular and political powers that took part in the January 25 revolution to accomplish freedom, dignity and social justice,” said the statement published on Saturday together with calls for mass protests.

Dozens of political parties and revolutionary youth movements announced an open-ended strike in Cairo’s Tahrir Square to protest the declaration and called on the president to withdraw what they described as a “fascist, tyrannical constitutional declaration.”

“We will not accept the Ministry of Interior’s threats to interfere and end the strike. We warn of a new massacre that will take the country into a dark tunnel and we will hold President Mohammed Morsi responsible for such actions,” said the statement signed by April 6 Youth Movement, the Constitution Party, the Popular Current and the Free Egyptians Party, among several others.

“Civil powers have convened and unanimously agreed to demand the withdrawal of the constitutional declaration that slammed freedom, democracy and the rule of law,” said Hamdeen Sabahi, a 2012 Nasserite presidential candidate and founder of the Popular Front, a coalition of Egypt’s leftist parties.

“The National Salvation Front we established today will embrace Tahrir Square and the youth of national powers in order to fulfill the revolution demands and bring down the constitutional declaration,” Sabahi told local press.

“The constitutional declaration passed by President Morsi represents an unprecedented violation on the independence of judiciary and its laws,” said a statement published by Egypt’s Higher Judicial Council.

“We regret passing such a declaration,” said the official statement.

The head of the Judges Club, Ahmed El-Zend, called for a “general strike by courts and prosecutor offices starting Saturday and an open ended sit-in at the High Court starting Tuesday.”

“I call for the immediate dismissal of Ibrahim Talaat, the newly appointed prosecutor general, and the return of Abdelmeged Mahmoud,” said El-Zend at the emergency meeting held by the Judges Club and aired by several cable channels.

Dozens of Muslim Brotherhood members allegedly tried to storm the meeting attended by the sacked prosecutor general, Abdelmeged Mahmoud, and scores of other judges and lawyers. Riot police fired tear gas to disperse the protesters.

Prior to the strike calls, courts in Alexandria, Assiut, Qaliubeya, El-Beheira and Aswan were almost paralyzed by judges who decided to begin their strike immediately after Morsi’s declaration on Thursday night. While Egypt’s judiciary approached total paralysis, a lawsuit was filed by 25 advocacy groups. A statement published by the Egyptian Initiative for Personal Rights, EIPR, on behalf of the nongovernmental organizations, said the lawsuit is “seeking the annulment of the President’s decree issuing a new constitutional declaration on 21 November and an expedited injunction suspending the decree.”

The lawsuit was signed by some of the country’s most reputable rights groups, including the EIPR, the Egyptian Organization for Human Rights and Hisham Mubarak Law Center.

President Morsi’s declaration provoked confrontations on Saturday between members of the Muslim Brotherhood and anti-Morsi protesters in the Nile Delta city of Damanhour, some 150 miles northeast of Cairo.

Abul Ezz El-Hariri, a prominent leftist figure and former 2012 presidential candidate, was brutally assaulted by Muslim Brotherhood members while attempting to prevent clashes between protesters in front of the Freedom and Justice Party office in the port city of Alexandria. Photos of El-Hariri’s bruised face and wounded chest were published by local media on Saturday.

“My wife and I were assaulted by swords and batons, my car was wrecked, I sustained injuries to the face and chest,” said El-Hariri on his Facebook account.

On Friday night, the offices of the Freedom and Justice Party were attacked with rocks and Molotov cocktails in several cities, including Alexandria, where the office was set ablaze. Riot police cordoned off offices in the cities of Suez and Port Said.

Scores of politicians and community figures blamed President Morsi for the ongoing strife and warned of catastrophic consequences if the situation is not immediately contained.

“The constitutional declaration is Morsi’s poisoned honey, he covered his blunt power grab by sacking the Mubarak-era prosecutor general and giving pensions to the revolution victims,” Hassan Abu Taleb, a political analyst at the Ahram Center for Political and Strategic Studies, told Al-Monitor.

“Morsi speaks of being unbiased but acts as president of the Muslim Brotherhood, not Egyptians,” said Abu Taleb.

“He is unaware of the crisis he ignited with his declaration, he feels victorious in a personal war, proud of speaking to his cheering crowds,” Abu Taleb described Morsi, who smiled and shook the hands of his supporters at the walls of the presidential palace after his speech on Friday evening.

“Morsi brought Egyptians to the worst point they could get to,” said Abu Taleb.