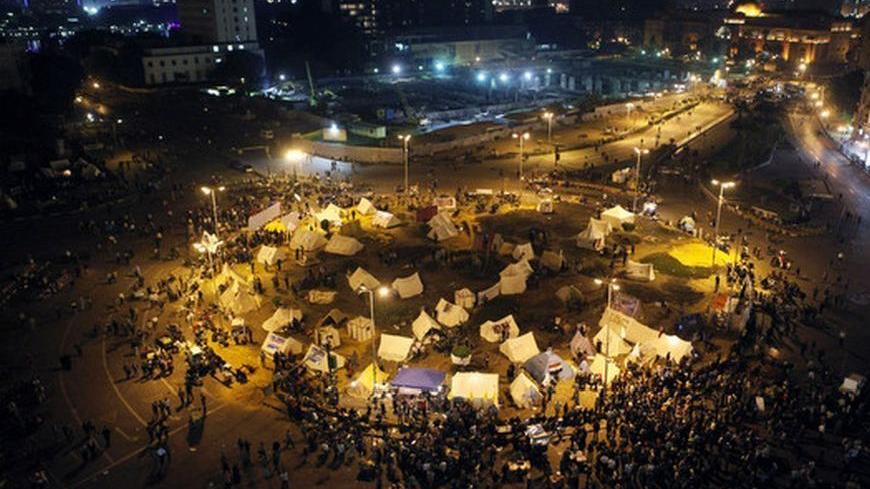 General view of tents in Tahrir Square as protesters and activists continue with their sit-in, in Cairo, Nov. 25, 2012. More than 500 people have been injured in protests since Friday, when Egyptians awoke to news Mursi had issued a decree temporarily widening his powers and shielding his decisions from judicial review. - REUTERS/Asmaa Waguih

CAIRO — One protester was killed Sunday and more than 60 were injured in clashes that erupted in Damanhour between members of the Muslim Brotherhood and others opposing President Mohammed Morsi’s constitutional declaration that grants him full immunity from all state bodies including the judiciary.

Islam Masoud, a 15-year-old student died after allegedly being brutally beaten by armed men during violent confrontations in front of the Muslim Brotherhood’s headquarters in the Nile Delta city of Damanhour, some 150 miles northeast of the capital Cairo. The Freedom and Justice Party claimed that Masoud is one of its members.

Saad El-Katatni, a top officer of the Freedom and Justice Party and speaker of Egypt’s now-dissolved parliament, commented on his Twitter account saying that “the killing of a party member, the continued thuggery and torching the party’s offices confirms that there are people who want to spread anarchy across Egypt.”

While clashes continued, a statement by Egypt’s presidency announced that Morsi’s constitutional declaration will not be withdrawn or at least revised.

“The presidency reiterates the temporary nature of the said measures, which are not meant to concentrate powers in the hands of the president,” said the statement published on Sunday evening. “It aims at preserving the impartiality of the judiciary and avoids politicizing it.”

Meanwhile, the number of political parties, advocacy groups, revolutionary youth movements and independent Egyptian figures that fiercely condemned the declaration continues to rise. The common denominator between all is the secular background and the fact that none of them dominated seats of either the now-dissolved parliament or the constituent assembly Morsi has just granted immunity through his constitutional declaration.

Those who opposed the declaration announced an open-ended sit-in at Tahrir Square and called for major protests on Tuesday [Nov. 27]. The Muslim Brotherhood’s swift reaction was calling for a million-man march to Abdin Square in support of the president’s declaration. Among dozens of massive squares across Cairo, the Muslim Brotherhood decided to put the gasoline right beside the fire by demonstrating less than a mile away from the anti-Morsi crowds.

But after warnings of possible bloody confrontations if Morsi’s supporters demonstrate minutes away from his furious opposition, the Muslim Brotherhood’s top spokesman, Mahmoud Ghuzlan, announced moving the protest to the Renaissance Statue Square in front of Cairo University in Giza.

Friday [Oct. 12] was the one day a few hundred of Morsi’s supporters and opposition protested together since he was elected president. Several protesters were injured in clashes that erupted when the main stage was attacked and shattered to pieces as soon as anti-Morsi chants echoed from the stage’s loudspeakers.

Last Friday, after finishing his never missed, always televised Friday prayer, Morsi announced that he would address the public regarding the political crisis he ignited with his declarations.

Soon after, he mounted the stage built by members of the Muslim Brotherhood, who he repeatedly claimed cutting all ties with since becoming president, the same stage from which leading figures of the brotherhood’s Freedom and Justice Party applauded his political wisdom and fired their condemnation at anyone who rejected the declaration.

“I will never be biased against any son of Egypt; I am with all Egyptians, supporters and opposition,” said Morsi, whose huge photo hung behind him, before his smile widened as he shook the hands of his supporters while riot police fired teargas canisters by the dozen at protesters in Tahrir Square for the fifth straight day.

It was clear that Morsi had anticipated a powerful rejection of his decisions. Several of his presidential aides announced that they were never informed of the declaration until they watched Yasser Ali, the presidential speaker, read its details on state television. Among those was his Aide for Political Affairs, Pakinam El-Sharkawy, who still supports the declaration though the presidency viewed her as unqualified to participate in planning one of the most important, or catastrophic, political stunts in the history of Egypt.

“It retaliates for the martyrs and starts a serious confrontation with corruption among some judicial figures,” said El-Sharkawy.

Samir Morcos, the president’s aide for Democratic Transformation Affairs who resigned his post on Friday, reported to the local press, saying: “I cannot continue in my post amid presidential decisions that hinder the process of democratic transformation.” He denied being informed of the declaration until he watched it on television just like ordinary citizens Thursday night.

Ayman Al-Sayyad, another presidential aide and prominent author, remained at his post but refused to endorse the declaration and denied being “asked, consulted or taking any part in the makings of the constitutional declaration.”

And while the president’s aides were left out of the not-so-democratic decision making process, thousands of Muslim Brotherhood members miraculously knew, gathered on Thursday in front of Downtown Cairo’s High Court, and started cheering while the presidential speaker read the declaration’s text on air.

Yasser Ali, the presidential speaker, told local media that “no one knew of the declaration except a few of the president’s closest advisers.”

But the chain of events that kicked-off even before the announcement Thursday clearly contradicts what Ali had confirmed.

So far, those who Morsi consulted over the constitutional declaration remain unknown.