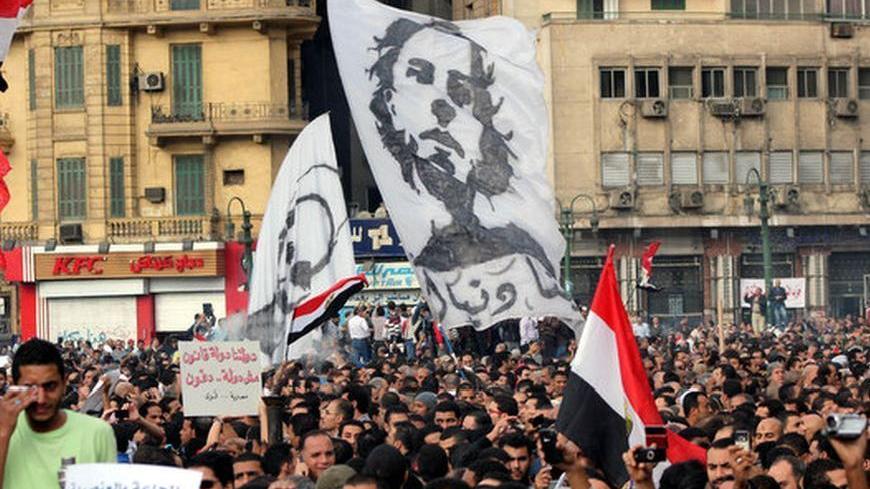 CAIRO — In reaction to President Mohammed Morsi's stunning constitutional declaration on Thursday night, Nov. 22, thousands of angry demonstrators marched to Cairo’s iconic Tahrir Square in protest of what they described as “a coup on legitimacy.” Thousands were led by Muslim Brotherhood officers to show support at the walls of the presidential palace.

Presidential spokesman Yasser Ali announced on Thursday night that President Morsi had passed a constitutional declaration granting full immunity to the disputed 100-member assembly charged with writing the constitution as well as the remaining Upper House of Egypt’s dissolved parliament, in addition to retiring the general prosecutor and ordering the retrial of Mubarak-era officials, including those acquitted through several trials held in the aftermath of the January 2011 uprising.

The second constitutional declaration passed by Morsi in less than four months in power included the “revolution protection law,” which grants him the power to single-handedly take all “necessary measures to confront any dangers threatening the January 25 revolution, the life and safety of the nation, national unity or standing in the way of state institutions in performing their duties.” Such decisions could not be revised, appealed or revoked by any other authority, including the country’s Supreme Constitutional Court.

A statement signed and published by liberal, democratic and secular parties as well as Egypt’s Popular Current, a coalition of leftist and Nasserite parties, condemned the decision it described as “a complete crime committed by President Mohammed Morsi in the name of a new constitutional declaration.”

“It represents a full coup on the legitimacy that brought him to power and a tyrannical usurping of the state’s authorities. It creates a dictator Egypt has never known, even in the era of Mubarak,” said the statement.

Hamdin Sabahi, Egypt’s popular Nasserite and a 2012 presidential candidate, led a massive march to Tahrir Square on Friday, Nov. 23 along with Mohamed El-Baradei, former head of the International Atomic Energy Agency and founder of the Constitution Party. They signed the statement of condemnation published after an emergency meeting of liberal and secular political powers held immediately after Morsi’s declaration on Thursday night.

“Morsi’s declaration is preparing Egypt for a new era of dictatorship,” said Amira Hafez, a producer at Egypt’s state-owned television channel who joined the anti-Morsi protest on Friday. “But his political ignorance actually united the secular powers against those who are controlled and regularly mobilized to serve the interests of the Muslim Brotherhood and its fellow Islamists.”

Morsi’s assistant for Democratic Transformation Affairs, Samir Morcos, resigned his post in reaction to the declaration.

“I resigned in protest of the constitutional declaration, which I was surprised to hear on television on Thursday night,” Morcos told local press.

“History will remember that such decisions were Allah’s salvation to the revolution and its noble men and the people of Egypt,” said Essam El-Erian, Deputy Chairman of the Freedom and Justice Party. “This will be the end to the dictator, the unjust, the hypocrite and whoever follows them.”

At 3:45 p.m., Morsi addressed the public from a stage erected overnight by members of the Freedom and Justice Party at the walls of the presidential palace in eastern Cairo, the same stage from which Islamist clerics and leading figures of the Muslim Brotherhood cheered the president, called for the application of Islamic Shariah law, and led an all-day attack on those who oppose the declaration.

“I will never be biased against any son of Egypt; I am with all Egyptians, supporters and opposition,” said Morsi, addressing thousands of supporters at the presidential palace while central security forces fired tear gas and birdshot at protesters right off Tahrir Square.

“I am working to accomplish the political and economic stability of Egypt,” said Morsi in defense of his decisions. “The powers of evil and the remnants of the former regime are trying to block our procession. But I will never allow anyone to stand in the way of the revolution's goals.”

Morsi’s confirmation that “he does not intend sole control over the country,” and that he is physically standing on a Muslim Brotherhood stage but his “heart and brain are all over Egypt,” failed to absorb the rising anger of tear gas-breathing protesters in Tahrir Square.

“The president has divided Egypt into seculars and religious and will lead us to bloody confrontations,” said Maged Atef, a bookstore manager who joined thousands of protesters in Tahrir Square.

“It is shocking to see the president passing a constitutional declaration and putting it above the law by granting it full immunity,” said Atef. “I fear he will be making more tyrannical decisions since he is immune.”

“The public and especially the judicial authorities have to immediately start civil disobedience or else the revolution will be over,” said Atef.

Mohannad Sabry is an Egyptian journalist based in Cairo. Follow him on twitter@mmsabry.