Irregularities Cloud Victory for Morsi in First Round of Referendum

Widespread reports of voting violations and irregularities have tainted the results of the first round of the referendum on Egypt’s draft constitution, which has passed according to early accounts, Mohannad Sabry reports. 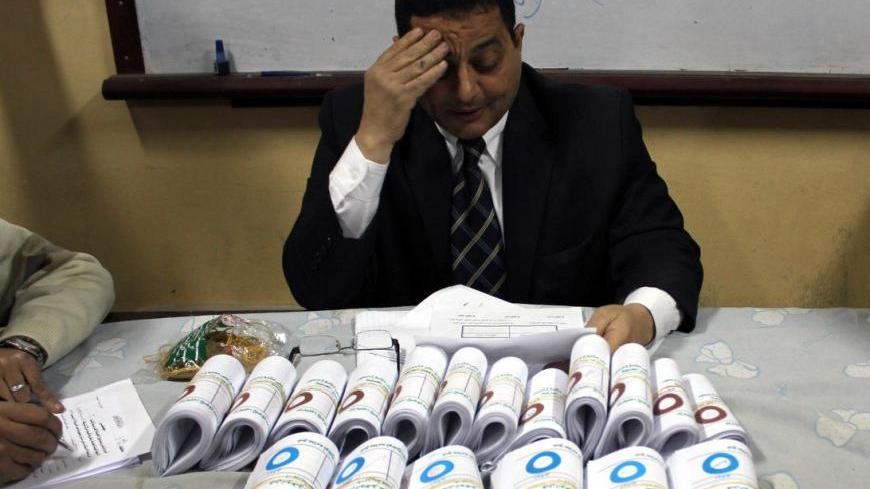 CAIRO — After hours of counting votes, Egypt’s elections committee said final results of the constitutional referendum will be announced after the second phase on Dec. 22, as dozens of initial reports by political parties and news agencies all claimed the constitution passed.

No official statements were published by the elections committee regarding the voter turnout or the results of the first phase of the referendum held on Saturday [Dec. 15] in 10 governorates including the capital Cairo and the Mediterranean port of Alexandria where 6,327 polling stations opened at 8 a.m. for Egypt's 25 million registered voters.

Meanwhile, several independent human rights organizations demanded “canceling the results of the first phase and re-holding it while avoiding the irregularities in the second phase.”

“Irregularities and violations took place throughout the first phase which corrupted the entire voting process and delegitimized the results of the first phase of the referendum,” said the statement signed by organizations that participated in monitoring the voting process including the Cairo Center for Human Rights and the United Group for Lawyers and Legal Advisors.

“The violations included the absence of full judicial administration, banning the civil society monitors from attending the count process, allowing members of the Freedom and Justice Party to enter polling stations, religious campaigning and tagging whoever refuses as blasphemous, deliberately blocking the voting process in some stations, shutting other stations before the scheduled time, and mass voting on behalf of women in some stations,” said the statement read by Bahei Eddin Hassan, head of the Cairo Center for Human Rights at a press conference held on Sunday.

A statement by the National Salvation Front, a coalition of opposition parties, said: “Its refusal to attempts of rigging the national will through the scandalous violations that took place on Saturday at the hands of the ruling authorities was confirmed by the testimonies of the neutral non-governmental organizations which is independent of the political conflict in Egypt.”

Other statements by opposition movements once again showed the lack of organization among members of the opposition front who have led massive condemnation protests since President Mohammed Morsi triggered and continued to deepen Egypt’s political crisis by his Nov. 22 decree that granted him massive powers and immunity, rushing the constituent assembly into passing the disputed draft constitution and calling for the nationwide referendum despite fierce opposition by dozens of political powers.

The revolutionary April 6 Youth Movement, which mobilized thousands of its members to advocate their “vote NO” campaign and to monitor Saturday’s voting process, said in a statement Sunday that it will continue campaigning against the draft constitution and received the initial results setting the refusing votes at 44% of the turnout with much optimism.

“The semifinal results blew away the dreams of the Islamist current and the Muslim Brotherhood movement when almost half of the Egyptian people said no in face of the baked constitution project and after exposing all the Islamist current’s attempts to deceive Egyptians over this constitution,” said the statement by Mohamed Adel, top officer and official spokesman of the youth movement. “Members of our movement will not stop encouraging the public to vote no, but will intensify their efforts and are confident in their ability to bring down this constitution.”

“It is impossible for a respectable country to pass a constitution refused by 44% of citizens, which is a huge portion in light of the low turnout that reached around 31% of the registered voters,” said Adel.

Former 2012 presidential candidate and human rights lawyer Khaled Ali filed a lawsuit Sunday demanding “cancelation of the referendum due to the irregularities spotted throughout the first phase.”

“The president’s decree calling for the nationwide referendum didn’t include the draft constitution that will be voted upon and it was not published in the official newspaper,” said the case file.

Ali added that he “refused to vote after knowing that the ballot form didn’t carry the constitution text on it.”

Judge Zaghlol Al-Balshi, secretary-general of the elections committee, announced that “all of the violations didn’t affect the democratic process.”

He condemned the media for “spreading false news that negatively impacts the referendum and sparks suspicion among the people.”

The Muslim Brotherhood’s top lawyer, Mohamed El-Damati, who was appointed head of the referendum operation room at the government-run National Center for Human Rights, harshly criticized the opposition in an interview with Al-Monitor: “Some of Egypt’s opposition elite are infected by diseases of undermining and exaggeration.

“Their illness of undermining is reflected by their claims that the constitution is shameful, which also proves that they haven’t even read it, while their exaggeration appears in the statements listing imaginary violations during the voting process.”

The prominent lawyer says that remnants of Hosni Mubarak’s regime have infiltrated the opposition lines and “are trying to take the country back into a dark tunnel that started with dissolving the parliament, attempting to dissolve the constituent assembly and the upper house, and most recently their attacks on the presidency.

“The political elite continue to swallow the bait or Mubarak’s remnants and believe their war is with us, the real war is between all of Egypt and those remnants,”  said El-Damati.