Egyptians voted on a draft constitution Saturday, some waiting for hours to cast their ballots and complaining of poor organization. Mohannad Sabry reports from a Cairo polling station. 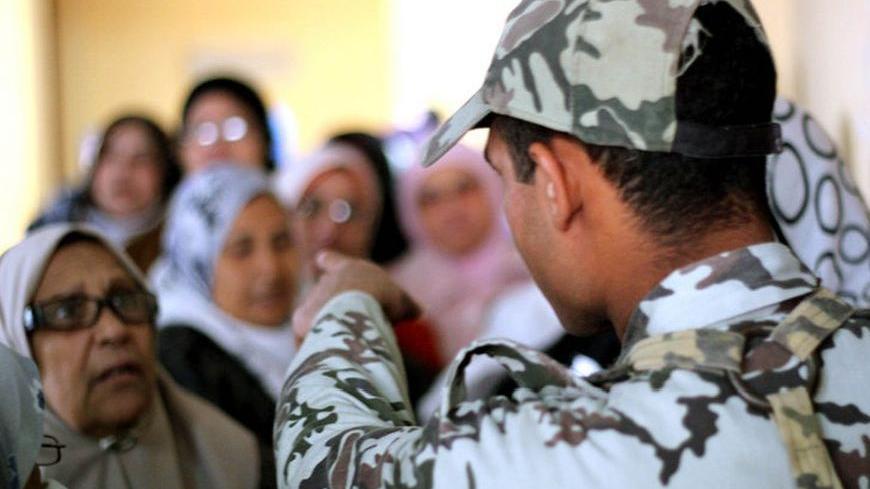 A soldier directs a line of female voters inside Al-Baheyya Al-Burhameyya polling station in Cairo's poor Sayyeda Zeinab district where hundreds of voters lined up around the building to cast their ballots in the first phase of Egypt's nationwide constitutional referendum on Saturday, Dec. 15, 2012. - Mohannad Sabry

CAIRO —The line of voters at Al-Bahheya Al-Burhaneyya polling station in Cairo’s poor district of Sayyeda Zeinab stretched for a few hundred yards outside the school building.

Inside the polling place, the scene was chaotic. Only four judges were overseeing four boxes for the ballots of district residents voting on their country's draft constitution.

Two lines, one for women and another for men, stretched up the stairs to the second floor where several military and police officers desperately tried to absorb the anger of those who had been waiting for hours, but whose turns were automatically given to the elderly, ill, or handicapped. There was no ballot box specialized for them on the ground floor for easy access, a measure applied in every polling station during the presidential and parliamentary elections and the constitutional referendum held by the interim military government in March 2011.

At one point, dozens of voters dashed into the voting room where only one judge and two assistants sat. “That’s it, no voting, we will not work unless you all get out,” yelled the judge, who refused to show his ID or give his name to Al-Monitor.

As early as 6 a.m., millions of Egyptians formed lines stretching around thousands of polling stations in ten governorates including the capital, Cairo, and the Mediterranean port of Alexandria to vote on the hotly disputed draft constitution.

President Mohammed Morsi rushed the referendum on the draft, written and voted upon by the dominant islamist bloc of the constituent assembly, to contain a political crisis sparked by his own Nov. 22 decree that granted him broad powers and immunity from all state bodies, including the judiciary. Huge protests broke out in support or condemnation of Morsi's decree and led to clashes in front of the east Cairo presidential palace, leaving several dead and hundreds injured.

Those who arrived two hours before polling stations opened at 8 a.m. were the most dissatisfied by the poor organization of the voting. Unlike the presidential elections in June 2012 and the parliamentary in November 2011, the shortage of judges due to nationwide boycotts left the polling stations with half or even third the number of sealed ballot boxes. Their absences also forced the referendum to be conducted into two sessions, with the second vote in Egypt's 17 remaining governates scheduled for Dec. 22.

Back at al Al Baheya Al-Burhaneyya polling station, several monitors deployed by the government-run National Center for Human Rights to monitor the voting process roamed the station, all of whom were bearded and bore prayer marks on their foreheads.

At 9:30 a.m., the military captain in charge of securing the station demanded media personnel to leave and banned several reporters and television cameras from entering before presenting “the special permits issued by the elections committee.” His claims came in contradiction of a Friday night statement by Judge Zaghlol Al-Balshi, secretary general of the elections committee, saying that “media workers have the right to enter any polling station as long as they carried any form of media ID.”

Outside the polling station, Mohamed Salem, a 59-year-old shop owner, stood at the end of the line of voters. He has been waiting for more than an hour. “The line of voters is organized, but waiting for hours before I can vote means that the whole process was poorly organized,” Salem told Al-Monitor.

“I will never accept this constitution. I have been confused by the war of statements between the Islamists and the opposition, but what I did understand is that this constitution represents only one sector of Egypt, and I am not a member of that sector.

“We will never allow another president to force himself and his people upon us like Mubarak and his party did,” said Salem.

Amr Abdelkarim, another 18-year-old voter standing in line, told Al-Monitor that “this is his first time to vote.”

“I will vote yes,” said Amr, who didn’t read the constitution but says his father told him “the constitution was written by god-fearing men who work for the nation’s interest.”

Meanwhile, several statements were published throughout the day by opposition parties and independent monitoring initiatives listing violations spotted at polling stations across the ten governorates of the first phase of the referendum.

Egypt’s independent Judges Club, which led the boycott campaigns that forced the elections committee to split the referendum into two phases, announced that it “received 420 reports of violations since the begging of the voting day.”

“Reports of violations included 120 indicating that those monitoring weren’t judges, 200 reports of directing voters to either vote for or against the constitution inside the polling stations, and 100 reports of unstamped ballot forms,” said the statement, published at around 8 p.m., three hours before the voting ended. According to elections laws, ballot forms that do not carry a fresh stamp indicating the station name and number are considered void and should be discarded during the count process.

The statement published the names of six judges affiliated with the “Judges for Egypt front,” a pro-constitution independent movement, that were among the monitoring judges, despite repeated confirmation by the elections committee that all judges involved in the political debate over the constitution were excluded from monitoring the voting process.

Another statement published by the National Salvation Front, a coalition of opposition parties, condemned Judge Zaghlol Al-Balshi, secretary general of the elections committee, for “announcing that the committee didn’t receive any reports of violations.”

Farid Zahran, deputy chairman of the Egyptian Social Democratic Party and head of the National Salvation Front’s referendum monitoring operation room, confirmed in the statement that “six reports have been sent to the elections committee so far, the reports detailed all the violations that spread across all of the ten governorates of the referendum’s first phase.”

“Judge Hisham Raouf, deputy Justice Minister and head of the ministry’s referendum operation room confirmed receiving our reports that detailed various violations, including members of the Muslim Brotherhood movement directing voters inside the polling stations, absence of judicial monitoring, full ballot boxes at the beginning of the voting process, and names of deceased citizens in voters lists among several other violations.”

“All judges who publicly announced their stance regarding the constitution have been excluded from monitoring the referendum. I personally looked into claims that stations were monitored by people other than judges and it was all false,” said Raouf. “We immediately look into all complaints as soon as we receive them.”