Doing the math on Egypt’s referendum

Egyptians go to the polls today to vote on amendments to the constitution. 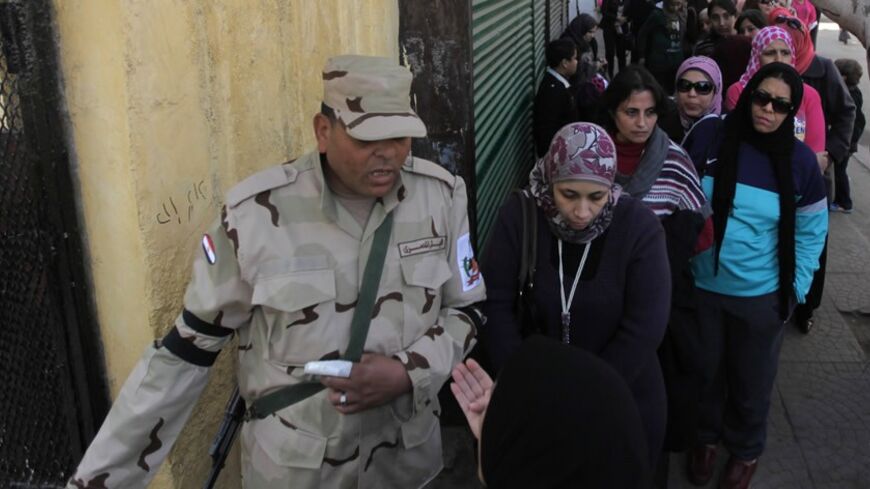 A soldier stands guard as women queue outside a polling center to vote in a referendum on Egypt's new constitution in Cairo, Jan. 14, 2014. - REUTERS/Mohamed Abd El Ghany

Egyptians go to the polls today to determine the country’s future in the most decisive referendum Egypt has ever witnessed. Although the vote is strictly on the new constitution, or rather on amendments drafted by a 50-member committee, the results will be far reaching.

The biggest stumbling block is the pro-stability camp, which usually supports any sitting government and has grown very tired of the prolonged political volatility over the past three years. This bloc mostly supported deposed President Mohammed Morsi’s constitution in December 2012, with more than 63% of the 17 million voters (a 33% turnout), and ratified the constitution put forward by the Muslim Brotherhood. This is a significant drop from 77% of those who supported amendments proposed by a committee appointed by the Supreme Council of the Armed Forces in March 2011, when 18.5 million voters participated, or 41% of the then-45 million registered voters. This bloc clearly trusts the army more than any political rivals and will vote for the new constitution.

Most liberals, socialists, Nasserists, nationalists and social democrats will also vote for the constitution for different reasons. Although these blocs are wary of the military’s expanding role in politics and wish to see a democratic transformation leading to freely elected governmental and civilian rule, they fear the Muslim Brotherhood more for the impact Islamist rule can have on Egypt’s identity, culture and personal freedoms. They may have some reservations about certain articles of the constitution but will most likely support the new draft, fearing that votes against it will be considered a political win for the Muslim Brotherhood, giving legitimacy to Morsi and possibly leading to the return of the Brotherhood and an end to Egypt as they know it.

There is another important bloc that is poorly researched, hence hardly understood and possibly unique to developing countries: swing voters who are easily mobilized or influenced. Their vote may depend on small monetary incentives, charitable favors or even distribution of food aid. Perhaps this is one reason why the government made a major gamble on freezing the assets of over 1,000 charities affiliated with the Muslim Brotherhood. The assets of more than 700 wealthy members of the organization were also frozen two weeks before the scheduled referendum, possibly to limit the Brotherhood's ability to buy votes and mobilize mass voting in poorer areas. The referendum outcome will tell how successful that bet was.

Activists and supporters of the January 25 Revolution make up a divided camp. Most subscribers to this camp supported and in fact initiated the massive protests on June 30 as early as November 2012, following Morsi’s controversial decrees. Gradually, they became disenchanted and increasingly alarmed by what they considered a return of the old oppressive security measures, smear campaigns against the January revolution and activists credited with playing important roles in the mobilization for the mass protests, the resurrection of several corrupt remnants of the Hosni Mubarak’s regime, detention of some of their fellow activists such as Ahmed Maher, Abou Douma and Alaa Abdel Fattah and a crackdown on dissent. They realize that the Muslim Brotherhood is an enemy of the revolution, but many of them hate the military more. This bloc is frustrated, uninspired and divided, and as a result will not be as influential in deciding on the outcome of the referendum.

Most Islamists, including Salafists, members of Gamaa Islamiya and supporters of the Muslim Brotherhood, will boycott or vote no. In fact, some of them may attempt to discredit the process and delegitimize its outcome. Although the Nour Party has run a strong campaign that appears to support the constitution, it is doubtful that even people who once supported the party will heed its call this time.

There are cross segments such as women, urbanites, youths and people belonging to different socioeconomic groups who will also influence the vote. Most women and the elderly are likely to support the new constitution, while most of the dissent will come from younger generations.

A simulation matrix that I had developed after the revolution includes the blocs and segments I discuss here. My rough estimates indicate that the new constitution will pass with a majority of more than two thirds. But it is not only the passing of the constitution that counts. The turnout is also very important, and measures are being taken to boost numbers and ensure credibility. Around 17 million voters participated in the constitutional referendum in December 2012. The current government has extended the vote over two days (Jan. 14-15) and allowed people not close to the polling station they are registered with to vote at any nearby station. The army and police have assured Egyptians that they will be protected during voting to quiet fears of violence or terrorist attacks on polling stations. Gen. Abdel Fattah al-Sisi personally asked Egyptians to vote.

A turnout of over 20 million voters will be considered a relative success, although that would only represent about 40% of voters. The government hopes for a vote of at least 70% in favor to use as evidence for its legitimacy and the Egyptian support of the road map. It is also rumored that Sisi is making his controversial candidacy conditional upon both a high turnout and an overwhelming vote in support. The stock market, business and consumer confidence will also soar upon the passing of the constitution by a high percentage.

The Muslim Brotherhood will probably attempt to discredit the referendum no matter what. But the outcome will hopefully be used by more reasonable leaders to shape the future discourse of the organization, if any.