The Egyptian military threatens intervention if issues between protesters and the government are not resolved within 48 hours. 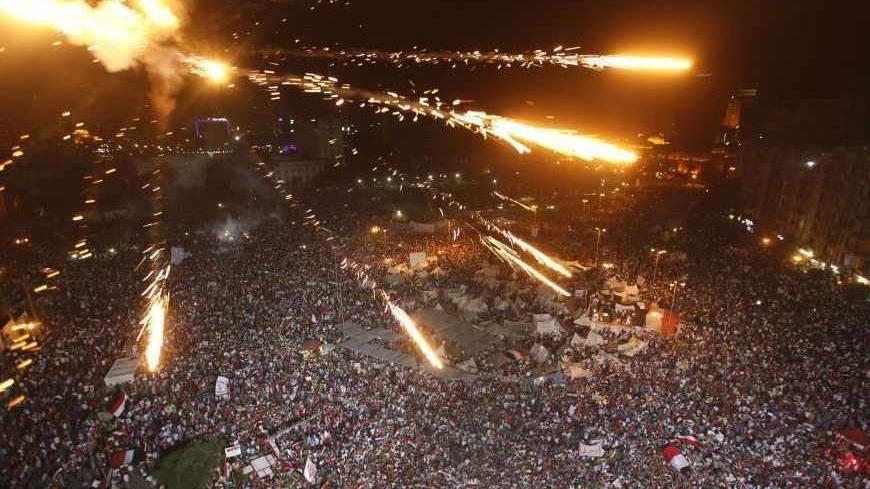 CAIRO — Almost two days after millions of Egyptian converged on the streets demanding the downfall of President Mohammed Morsi, the military, which has long been called on to intervene, stepped in with a powerful statement declaring that it will step in if the crisis isn’t resolved within 48 hours.

“The armed forces repeats the call for fulfilling the people’s demands and gives everyone a 48-hour last opportunity to bear the burden of the historical phase the nation is undergoing,” said the statement broadcast by Egypt’s state-owned television and dozens of independent cable channels.

“If the demands of the people aren’t met by the declared deadline, it will be obliged — through its national and historical responsibility and in respect of the demands of the great Egyptian people — to announce a future map and will oversee measures with participation of all national and faithful currents, including the youth who were and continue to be the initiator of the revolution,” the statement read.

The statement that looked, read and sounded like a clear threat to Morsi also said, “The military will not be part of the circle of politics and rule, and will not abandon the role drawn for it in the pure democratic vision that stems from the people’s will.”

“The people already brought down the regime,” a roaring chant by protesters that echoed one from Feb. 11, 2011, when Hosni Mubarak resigned, blared as the military spokesman’s firm voice also was clearly heard by millions of protesters holding their sit-ins in defiance of Morsi’s regime.

Five military helicopters flying Egyptian flags roamed the skies of the capital, Cairo, as demonstrators in Tahrir Square and in the vicinity of the eastern Cairo Ittihadeyya palace applauded them. Several Apache gunships followed in a scene reminiscent of the F-16 that whistled through the skies of Hosni Mubarak’s last days as retired Defense Minister Mohamed Hussein Tantawi ascended to rule Egypt through its transitional period, a period that seems to have once again kicked-off on Morsi’s first anniversary in power.

“The police department announces its full endorsement of the statement of the armed forces and is keen on maintain the national security and higher interests of Egypt and its great people through this critical phase.”

Egypt’s military — led by Field Marshall Abdel Fattah Al-Sisi, a former military intelligence chief appointed by Morsi in August 2012 – has been alternately called on to act, or fiercely called on not to interfere, by different poles of the  opposition and apolitical civilians who joined what is said to be the biggest protest in the history of the country. The protest was scheduled for Sunday, June 30, the one-year anniversary of Morsi’s rule.

But the military statement’s confirmation that it would not become a part of the “political or rule circle” seemed to have a soothing effect on the most-powerful parties and movements in Egypt’s opposition.

“The Popular Current values that righteous vision declared by the Egyptian army and that it sensed the dangers of the current situation and the repercussions of wasting time, which could lead to intensifying division and conflict; it values the military’s stance in the crisis and that it will not be a party in politics or rule,” said a statement published by Popular Current, a coalition of leftist parties led by Hamdeen Sabahi, Egypt’s influential Nasserite and a Morsi rival in the first phase of Egypt’s 2012 presidential elections.

The Tamarod (Rebel) Initiative, the independent petitioning campaign led by a several revolutionary youth that helped sparked this wave of Egypt’s unrest and rebellion against Morsi, applauded the military’s threat to intervene, and demanded more.

“The military’s statement showed its allegiance to the Egyptian people and confirmed that the initiative represented the national will in demanding the departure of the regime after it failed to become a part of our revolution; Mohammed Morsi is a president of the counterrevolution,” said Tamarod founder Mahmoud Badr.

“The opportunity given by the military is enough for Morsi to immediately leave and open the road for the national will’s demands to be fulfilled by holding early presidential elections,” added Badr at a media conference held less than an hour after the armed forces’ declaration.

Hassan Shahin, the official spokesman of the initiative, said, “The youth revolution is facing terrorist militias that murdered more than 18 martyrs so far.”

Shahin demanded trials for top officers of the Muslim Brotherhood, including its Supreme Guide Mohamed Badei, its top strategist Khairat el-Shater and a long list of other officials who “stood behind the murder of our martyrs.

The Tamarod media conference called on Egyptians to march on the Qubba Presidential Palace, where Morsi was forced to go after hundreds of thousands surrounded the permanent Ittihadeyya Palace to hold a sit-in until “Morsi is forced out.”

A few hours before the statement, four ministers confirmed resigning from Morsi’s appointed cabinet   led by Prime Minister Hisham Qandil. Unconfirmed reports indicated that the number of resigning ministers rose to 10 as Qandil desperately attempted to contain a mass exodus.

Meanwhile, hundreds of thousands of protesters returned to the streets of Cairo and several other major cities. Governorate buildings were cordoned by protesters who pledged that Morsi’s recently appointed governors would not be able to gain access to their offices. Labor unions in several governorates, headed by the Nile Delta’s industrial Mehalla city, announced open-ended strikes until the regime’s downfall.

The Egyptian presidency clearly showed how unprepared it was for the military’s intervention; a news conference it had scheduled for Monday night was canceled.

A few hours later, a statement was published on the official Facebook page of the Egyptian presidential spokesman.

“The presidency confirms that it continues to pursue its plans for national reconciliation inclusive of national, youth and political powers regardless of any statements that deepens division between the people and could threaten social peace, and regardless of the motives behind such statements,” the statement said.

“President Mohammed Morsi was not informed of the statement released by the general command of the armed forces and the presidency believes that some of the phrases used in the statement could further disrupt the complicated national scene.