In a highly anticipated speech, President Morsi offered little new on national reconciliation and confirmed to his opponents that he is incapable of confronting the worsening challenges the country faces. 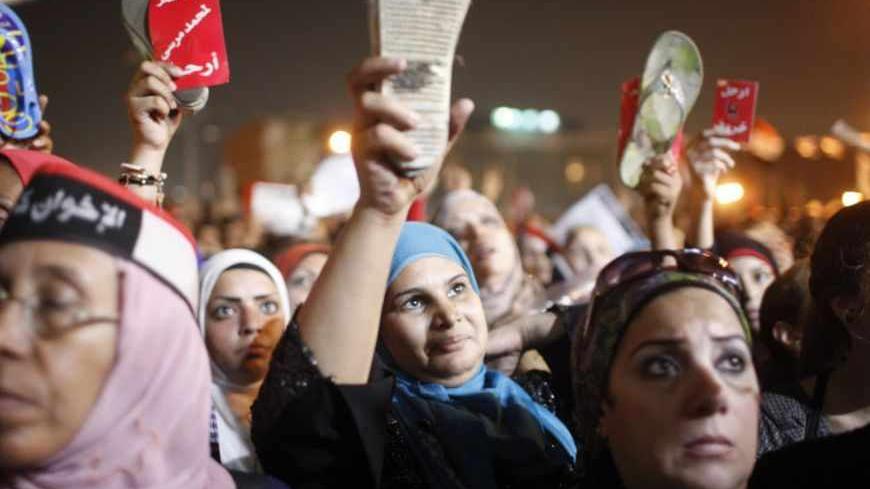 CAIRO — “Here comes the fool.” This colloquial Egyptian saying echoed across Cairo’s Tahrir Square as soon as President Mohammed Morsi appeared on the big screen erected by opposition movements to follow his much anticipated speech. Hundreds of protesters held shoes in the air in a scene reminiscent of the 18-day uprising in January 2011 that ousted the three-decade rule of President Hosni Mubarak.

Despite having little hope for reform or having their demand for early elections fulfilled, a few thousand protesters gathered in the square on the night of June 26 carrying red cards and banners emblazoned with slogans demanding the president’s exit and eagerly awaiting what turned out to be a two-and-a-half-hour sermon composed primarily of attacks on the media, opposition, judiciary, former presidential candidates and alleged conspirators.

For a few hours before the speech, scheduled to begin at 9:30 PM, minor skirmishes erupted between Egyptians demanding a military intervention to take control of government and others who resurrected the mantra of the military-led transitional period, “Down with military rule.”

In a teasing kickoff to his speech, Morsi began, “I stand in front of you as the Egyptian citizen, Mohammed Morsi, before being the president responsible for the destiny of the nation and the future of the people, fearing for my country, for the precious Egypt that if harmed, may Allah forbid, will impact not only the Arab and Islamic world, but the entire world.” His words were met by a Tahrir Square message sent to Mubarak and the interim Supreme Council of the Armed Forces: “Leave. Leave.”

“This is exactly what we came for — to listen one last time to nonsense coming from a crippled president,” Ahmed Alaa, a 28-year-old father of two told Al-Monitor. “It’s too late. No one will believe a word of Morsi’s lies or fall for his attempts to further polarize the already divided country,” said Alaa. He also offered, “The only benefit of Morsi’s final speech is further uniting the frustrated masses against him.”

It was not long before Morsi’s speech turned from revolutionary slogans to attacks on prominent individuals.

“Was Makram Mohamed Ahmed a revolutionary? The press syndicate overthrew him, and he comes back to claim being a revolutionary,” said Morsi, referring to the former head of the Press Syndicate. The president added that the officers of Mubarak’s National Democratic Party might now also have become revolutionaries, “since everyone on trial is being acquitted.”

He accused Ahmed Bahgat, owner of Dream Cable Channels, and Mohamed al-Amir, owner of CBC Cable Channels, of “attacking his administration instead of paying what they owe the state.” Morsi and an array of the Muslim Brotherhood’s top officers had been regular guests of both television networks before his election as well as after he took office.

“Ahmed Shafiq. Is he a revolutionary? He lives abroad inciting a coup while being on trial, yet people approach him as an icon of the revolution,” continued Morsi, referring to his competitor in the runoffs of the country’s first free presidential elections.

Morsi then took aim at the judiciary, alleging, “I respect the judiciary, but a member of the judicial panel looking into Ahmed Shafiq’s case, Ahmed al-Nemr, is known for rigging. He is among 22 people who should be prosecuted for rigging elections, I personally filed legal action against him.”

Morsi’s attack on Shafiq coincides with the Higher Election Committee’s decision to look into Shafiq’s appeal against the results of the presidential elections. As many had anticipated before the speech, Morsi praised the Ministry of Interior despite then going on about known criminal elements alleged to be arming anarchists and supporting violent instigators planning attacks during the June 30 protests. Instead, such activities would appear to point to the past and continued inactivity of the police force.

The president’s attempt to reach out to the country’s security apparatus comes at a time of intensifying tensions between his administration and the Ministry of Interior that thus far has resulted in the unexplained and ongoing absence of the police force even in the heart of Cairo. Morsi sent a sweet and superficial message to the military, which has deployed armored vehicles and red-capped military police to secure sensitive facilities across the country.

Among those upon whom Morsi bestowed his praises was Adel al-Khayat, a top member of the Islamic Group — which is known for its history of terrorist attacks, including the 1997 Luxor temple massacre during which its members murdered 58 foreign tourists — and the man appointed by the current administration as governor of Luxor. Morsi thanked him for “resigning for the sake of public interest” after one week in office. Khayat stepped aside in the wake of the crisis his appointment created, including the attempted (and denied) resignation of Tourism Minister Hisham Zazou in protest.

As the president carried on, speaking of his achievements until midnight, the security forces barely moved to contain ongoing clashes between Islamist supporters and opposition members in the Nile Delta city of Mansoura. The latest official statements confirmed that two were killed and more than 200 injured.

Dozens of opposition figures expressed fury at Morsi’s speech, which was delivered at Cairo’s International Conference Hall. As government members and thousands of Morsi supporters attending the speech applauded the president, streams of statements were issued condemning the president’s failure to contain the volatile situation in the country.

Hamdeen Sabahi, the Nasserite competitor in the first phase of the 2012 presidential elections, asserted, “Morsi failed to make the right decision and call for early elections. His speech undermines his position as president and undermines the moment Egypt is going through.” In an official statement published by the Popular Current, a coalition of leftists, Sabahi added, “Morsi’s claims that he represents the revolution is a scandalous lie, and ignoring the June 30 protests is an insult to the people’s will.” He continued, “I demand that Morsi take the Luxor governor as an example and resign.”

Abdelsattar el-Balshi, a Cairo-based lawyer, told Al-Monitor that Morsi’s speech contained allegations potentially punishable by law. “Every name Morsi mentioned is a stand-alone case of false accusations and spreading rumor. Legally, if he fails to stand trial and present evidence to each one of those claims, he should be punished.”

“We will see legal action taken by everyone attacked by Morsi during his speech. Moreover, it is shameful to see a president speaking about crime, accusing public figures on air, but not doing anything about it,” added el-Balshi.

In Tahrir Square, dozens of protesters from various opposition movements who had originally planned a sit-in for June 28 erected their tents and kicked-off the event while Morsi continued with his speech. As before, they pledged not to leave before the regime’s downfall.

Mohannad Sabry is an Egyptian journalist based in Cairo. He has written for McClatchy Newspapers and The Washington Times, served as managing editor of the Global Post's reporting fellowship Covering the Revolution in Cairo and contributed to its special reports "Tahrir Square" and "Egypt: The Military, the People." On Twitter: @mmsabry