As a new president took power in the name of the people, Egyptian authorities began arresting about 300 leaders and supporters of Mohammed Morsi's regime. 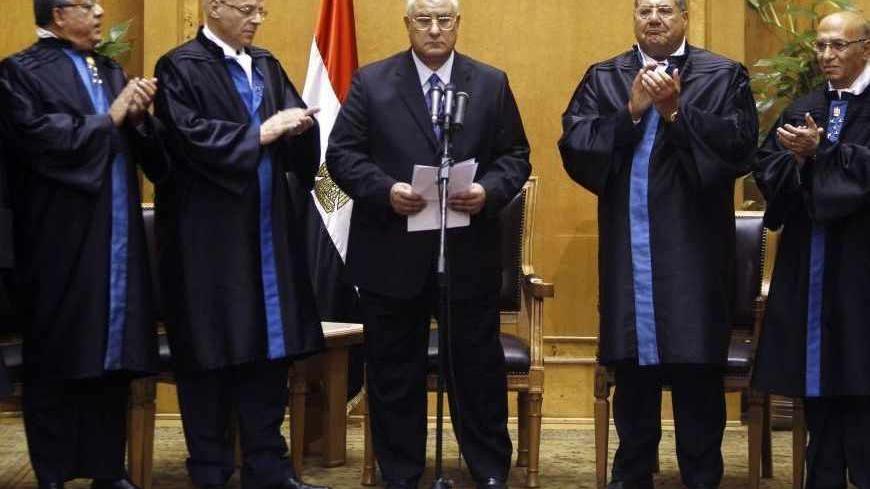 Adly Mansour (C), Egypt's chief justice and head of the Supreme Constitutional Court, is applauded by other judges after his swearing-in ceremony as the nation's interim president in Cairo, July 4, 2013, a day after the army ousted Mohammed Morsi as head of state. - REUTERS/Amr Abdallah Dalsh

CAIRO — By taking the presidential oath on the morning of July 4, Judge Adly Mansour became the second interim president in the history of Egypt after Sofi Abu Taleb, who took over for an eight-day stint after Anwar Sadat’s assassination in 1981. Mansour, the 68-year-old head of Egypt’s Supreme Constitutional, was ordered to temporarily fill the presidential seat by Defense Minister Abdel Fattah al-Sisi, who led a military coup and ousted the Muslim Brotherhood’s Mohammed Morsi.

Mansour’s assumption of Egypt’s presidency took place only two days after he was elected head of the constitutional court; his predecessor, Judge Maher el-Behiri, had retired on June 30, the kickoff day of the massive protests that forced the departure of the country’s first freely elected yet finger-wagging, bloodshed-threatening Morsi.

In Egypt, a new president is sworn in in front of the head of the Constitutional Court and the higher judicial committee, but since the court’s chief judge was appointed interim president, Mansour took the presidential oath in front of his higher judicial board as military troops and armored vehicles surrounded the southern Cairo building.

“I was ordered by the Egyptian people to take responsibility; they are the masters and leaders who, on June 30, corrected the path of their honorable revolution that started on January 25, 2011,” said Mansour after taking the oath.

As the military further consolidated its full-fledged coup — blessed by millions of protesters, opposition leaders, religious clerics and even the Muslim Brotherhood affiliates who hastily jumped their sinking ship — top officials of the armed forces confirmed to local media that the toppled Morsi was being “kept under arrest at an undisclosed military location.”

Coinciding with the coup against Morsi, who was overthrown by the man he promoted from military intelligence chief to defense minister, several Islamist cable channels were shut down and many of their staff were immediately apprehended. The channels included the Muslim Brotherhood’s own Misr 25 cable channel, and the Salafist owned Al-Nas and Al-Hafiz.

Al-Nas cable channel is most prominent for hosting Assem Abdel-Maged, a speaker and senior officer of Egypt’s Gamaa Islamiya, which planned and executed dozens of terrorist attacks, including the 1997 Luxor massacre that killed 58 tourists. “I tell the church not to sacrifice your children. Do they think that the Islamist public will remain silent if they answer this call and try to overthrow the president?” Abdel-Maged said during his appearance a week before the June 30 mass protests against Morsi.

Egypt’s Press Syndicate, which is continually attacked by Egypt’s Islamist currents, was the first to fiercely condemn the arbitrary detention of media workers even though dozens of shows, hosts and guests dedicated hours of broadcast time to inciting violence against anti-Morsi protesters and smearing opposition figures. All the apprehended media workers were released less than an hour after their detention.

Morsi and the media propagandists were not the only ones on the list of wanted Muslim Brotherhood regime members and affiliates. Security sources have put the number at 300, including Muslim Brotherhood Supreme Guide Mohamed Badie and his deputy; the group’s top strategist, Khairat el-Shater; Essam el-Erian, deputy chairman of the Freedom and Justice Party; and Mohamed el-Beltagi, secretary-general of the party. The arrest of Saad el-Katatny, the party’s chairman and speaker of the dissolved 2011 parliament, was confirmed.

“The dawn visitors (a common Egyptian phrase for a house raid), thugs of Mubarak and the military honored us at night to apply the national reconciliation detailed by the road map. We are living our best times,” read a tweet by Ibrahim el-Erian, son of Essam.

A crude video showing a raid on Morsi’s house in his hometown of Sharqiya, years before his ascendance to power, virally spread on social media websites. More than a million people watched the YouTube video showing a police officer threatening, “Morsi will be treated like a criminal and brought out in handcuffs.”

Kamel Mandour, a member of the Muslim Brotherhood’s team of prominent Islamist lawyers, talked to Al-Monitor and voiced concerns about the mass arrests. He picked his words carefully, and clearly avoided Morsi-like accusations and threats to the military, but he didn’t shy away from harshly attacking the opposition.

“The initial signals of this sudden transformation in Egyptian politics are perceived as a giant step backward to the pre-January 2011 era. Political changes are accepted, but if it’s a military coup accompanied by crackdowns on whoever opposes it — the Islamist current — and shutting down media outlets, then it’s definitely a step backward,” said Mandour.

“All of those are still unconfirmed intentions but the signals are strong, they are reminders of Hosni Mubarak’s crackdown on the opposition before elections,” added Mandour before waging an attack on Morsi’s opposition. “I am afraid it is a retaliation campaign from the Mubarak regime that returned to take revenge from the Morsi regime that prosecuted them for crimes committed before January 2011.”

“The opposition, Nasserites and Al-Wafd Party, were partners of Mubarak and the real opposition was the Islamist current and the very small fraction of the leftist currents. The rest were affiliates of Mubarak and now they are leading the scene with fragile parties that have been shown to have had no political success or organization whatsoever,” added Mandour. “I hope it’s just a security precaution as they claim.”

A statement by US President Barack Obama addressed the mass arbitrary arrests that started with Morsi and continue to target his affiliates.

“I now call on the Egyptian military to move quickly and responsibly to return full authority back to a democratically elected civilian government as soon as possible through an inclusive and transparent process, and to avoid any arbitrary arrests of President Morsi and his supporters,” Obama said.

Meanwhile, legal experts representing the opposite pole had a different and more analytical approach to the extraordinary situation. Abdelsattar el-Balshi, an independent lawyer and legal adviser, viewed the mass arrests as a revolutionary, exceptional and extremely necessary security campaign forced by the volatile scene rather than political allegiances.

“You cannot leave the country dotted with strife and violence mongers who will ultimately lead to bloodshed. Such exceptional measures provide security and protection for both the public and the apprehended figures that could very well be targeted amid the rising tension,” Balshi told Al-Monitor.

“As for their fear of legal retaliation, I tell them not to worry. All of Egypt, including Morsi as president and his ruling Muslim Brotherhood, could not retaliate against Hosni Mubarak’s regime over two years because the Egyptian legal system doesn’t include any laws for political crimes. And if first-degree (primary court) judges are swayed because of their well-justified animosity to Morsi’s regime, the second-degree appeals and cassation courts will not,” Balshi explained.

“But I know that dozens of cases will be filed against them and they have committed a long list of actions that are legally viewed as crimes, including false accusations, rumor spreading, inciting violence, and finally, threatening national security and calling for attacks on civilians, police forces and the military.”

Erian, the wanted deputy chairman of the Freedom and Justice Party, confirmed what Balshi told Al-Monitor with a statement on his official Facebook page.

“I believe that the wise ones will save the Egyptian army a similar fate to the Syrian Baathist army,” said Erian. “The era of military coups is over and will not return.”