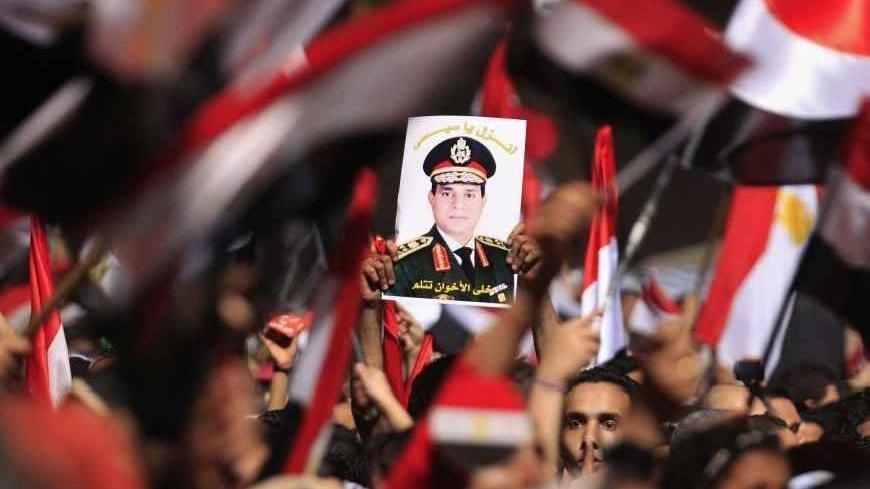 CAIRO­ — Despite Mohammed Morsi’s finger-wagging threats to defend his presidency with his blood, Defense Minister Abdel Fattah Al-Sisi announced Wednesday [July 3] that he had toppled the country’s first freely elected president. The declaration, made as tanks rolled on the streets of Egypt, was met by roaring cheers of millions holding massive nationwide protests.

“The military was incapable of deafening its ears and turning a blind eye on the masses calling for the military’s national role, not a political role, as the armed forces continues to confirm that it will remain distant from any political activities,” the military chief said.

“The military sensed that the people are calling for its endorsement, not to rule, but to attend to the public service and the needed protection of the revolution’s demands. This was the message received by the military from Egyptian cities and villages, a call it answered and valued its urgency.”

Sisi solemnly added: “There were hopes for national consensus that would set a future roadmap and provide levels of confidence and stability that will fulfill the people’s ambitions. But the president’s speech last night, prior to the 48-hour deadline, failed to satisfy the demands of the masses, which obliged the armed forces to confer with leaders of national, political and youth powers.”

The roadmap agreed on by Sisi and the attendees of his speech, who spent several hours in a closed meeting beforehand, included several immediate actions declared by Sisi:

As Sisi continued his speech, roaring celebrations broke out all over the country, as hundreds of thousands holding their Tahrir Square sit-in cheered and chanted revolutionary chants. “This time, it (the revolution) will not be surrendered to anyone,” echoed a chant that will always be remembered as the main slogan of what Egyptians dubbed the June 30 revolution.

Morsi’s supporters, who continued their eastern Cairo rally they have holding since May 29, broke down in tears and chanted condemnation of Sisi and the opposition. Minor skirmishes broke out between the angered protesters and military personnel who had been deployed earlier to watch over demonstrations held by both opponents and supporters of the freshly ousted regime.

ElBaradei, former chief of the nuclear watchdog IAEA who was named representative of the Egyptian opposition, addressed the public to confirm that the “roadmap guarantees meeting the main demand of the Egyptian people, early presidential elections, through a transitional period that will allow us to build and agree to a new constitution.”

Sheikh Ahmed Al-Tayyeb of Al-Azhar, the Islamic world’s Egypt-based Sunni Muslim institution, said Wednesday’s action “stems from the religious duty of committing the lesser of two harms, and since every party insists on their stance and refuses to compromise, I decided to endorse the opinion calling for early presidential elections, guaranteed by Egypt’s honorable judiciary.”

Pope Tawadros II of Egypt’s Orthodox Church, who also led the prolonged talks with Sisi prior to the military coup announcement, said, “The future roadmap comes after the consent of everyone.”

Mahmoud Badr, the founder and general organizer of Tamarod [Rebel] Initiative, was the last to speak.

“The triumph of the Egyptian people’s will puts the revolution on the right path. I demand that the youth of this nation protect the accomplishments of this revolution that were only fulfilled by blood and the martyrs,” said Badr.

“Let us begin a new page in the history of this nation, a page built on participation. Our hands are extended to everyone and all Egyptians. We seek to build an Egypt for all and by all, Egypt is a home for all its sons, without exclusion of anyone.”

Mansour, who's to become the second interim president in the history of Egypt after Sofi Abu Taleb — who filled the 10-day transition between Anwar Sadat’s assassination and Hosni Mubarak‘s 1981 ascendance to power — is expected to take the presidential oath on Thursday [July 4].

“May God help me,” said the brief and only statement by Mansour.