Egypt's Brotherhood Must Be Assured Part in Politics

The opposition must be clear in condemning attacks on the Muslim Brotherhood, and in reassuring the Brotherhood that it will continue to be part of the country's political fabric in the future. 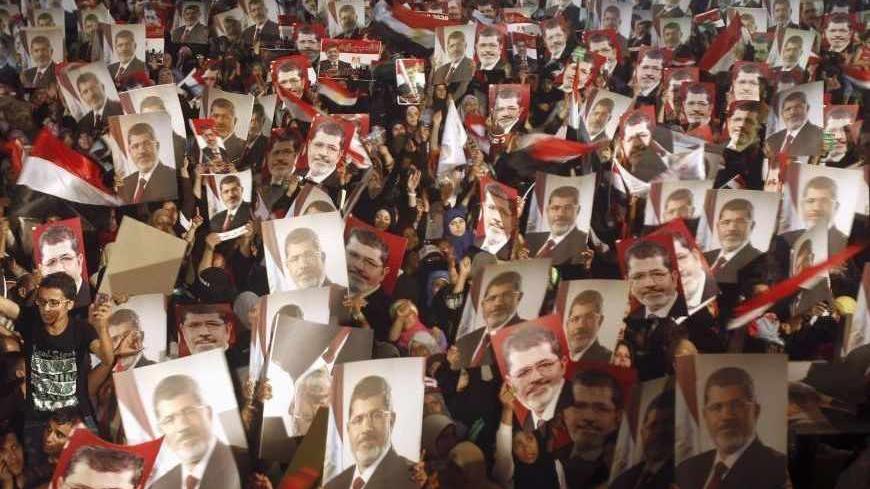 Members of the Muslim Brotherhood and supporters of Egypt's President Mohammed Morsi hold pictures of him as they react after the Egyptian army's statement was read out on state TV, at the Raba El-Adwyia mosque square in Cairo. July 3, 2013. - REUTERS/Khaled Abdullah

In a re-revolution of the revolution, General Abdul Fatah Khalil el-Sisi has announced that Islamist President Mohammed Morsi is no longer president. Opposition demonstrators erupted in roaring cheers, fireworks lit the sky and celebratory gunfire and honking could be heard through the night as people drove through the streets proudly waving Egyptian flags.

It is a proud, moving day for many Egyptians, yet again having accomplished what was unimaginable a few months prior. As he made the announcement, General Sisi was surrounded by opposition leader and spokesperson of the June 30 front Mohamed El Baradei, Coptic Pope Tawadros II and Al-Azhar Grand Sheikh Ahmed al-Tayyeb, all expressing their support for the will of the people.

As promised, General Sisi laid out of a four-part roadmap for the country: suspension of the current constitution, selecting a committee to amend the constitution, holding an early presidential election under the Supreme Constitional Court’s oversight and forming an interim technocratic national-consensus government.

For a group that was outlawed under then-president Gamal Abdel Nasser until the 2011 revolution, the past year has been a tumultuous rags-to-riches-to-rags story. The underground group, illegal for decades, skyrocketed to dominate the legislature and take the presidency in a six-month period in 2012, and met its end in a military coup instigated by popular will in the course of a year.

The power of the Muslim Brotherhood’s well-established grassroots network providing social services unquestionably won it many votes in the last elections, as did its experience in being the only group to contest elections under the regime of deposed president Hosni Mubarak. But apart from these reasons, for many middle-class Egyptians — religiously adherent, but moderate — the Brotherhood was the obvious choice when the country went to vote in Egypt’s 2011-2012 parliamentary elections.

Although it was a rose-tinted view, many took the Brotherhood’s deep religiosity and discipline to mean respectability, honesty and effectiveness. After the notorious corruption of Mubarak and his cronies, the Brotherhood seemed its antithesis. Its vast network of social services in underserved neighborhoods was taken as a sign of capability, awareness of the country’s needs and dedication to Egypt. And unlike the liberal, secular opposition, the Brotherhood would protect the Islamic identity and values of Egyptian society without the Salafis' rigid interpretation of religion. Taking a leap of faith, but also seeing few or no moderate alternatives, thousands of voters flocked to the polls and marked the names of the Brotherhood’s candidates.

Others, including seculars, liberals and revolutionaries, unconvinced of the Brotherhood’s genuineness and in ideological disagreement, voted for an assortment of other nascent opposition parties, all struggling to muddle their way through electoral campaigning and mobilizing. This same group, though, backed into a corner during the presidential runoff between Ahmed Shafiq, a leftover of Mubarak’s regime, and the Brotherhood’s Morsi, held its breath and voted for the recently removed president. There was a hesitant optimism from even the skeptics that maybe, just maybe, this would not go all terribly wrong.

By November 2012, furious protesters were out in full force against a series of authoritarian constitutional decrees from Morsi placing him and the Shura Council beyond judicial review as the Islamist-dominated Constituent Assembly worked to finish drafting the constitution. The following days saw vicious and bloody battles between those supporting and opposed to Morsi. From there the situation continued to deteriorate as Morsi pushed through the referendum on a draft constitution written primarily by Islamists.

Polarization, tension and frustration only worsened in the following months as the executive, legislative and judiciary offices battled, especially as the anniversary of the January 25 revolution and the ruling on the Port Said soccer massacre saw the country descend into chaotic bloodshed with too little, too late action from the country’s leadership to steer out of the mess.

Furthermore, the Islamist-written constitution and legislation put forth by the Islamist legislature came to be seen by many as an attack on Egyptian identity. Chants of “We’re not Islamist, we’re not Salafi, we’re Azhari” could be heard at gatherings protesting against Morsi. Now, many not only blame the Brotherhood for the demise of the country, but also blame the group for sullying the good name of Islam, an Islam that is not Egypt’s Islam.

Now the tables have turned, as the democratically elected president from the Brotherhood finds himself ousted by a military coup instigated by popular will — a contradictory phenomenon, possibly the first such incidence in history — as millions have gathered in Tahrir Square and the Ittihadiya and Qubba presidential palaces in the past few days to demand Morsi’s exit.

In response to the army’s statement, Morsi delivered a recorded speech over speakers to a Brotherhood sit-in at Raba’a Al Adawiya Square, where they have been camped out since Sunday. He claimed to still be president in the speech, but is currently under house arrest. Similar to yesterday’s speech, he urged civilians and the military to uphold the law and not accept the coup, which he said would turn Egypt backward.

The Ministry of Interior also took to Islamist television networks, including Muslim Brotherhood-owned Misr 25, and the controversial Hafez and Al-Nas channels off the air. Al-Ahram reported that the crew of Misr 25 were arrested, with staff at other channels allegedly evacuated from their offices. With limited access to outlets for inciting violence, the move may help prevent bloodshed on this crucial night, but it also poses an ominous sign for the Brotherhood in days to come.

On Tuesday, July 2, battles at a Brotherhood rally at Cairo University left 18 dead and 367 injured when fighting broke out between rally participants and unidentified assailants reportedly against Morsi. Earlier in the week the Brotherhood’s Moqattam headquarters were attacked and raided with almost no police protection, and dozens have been killed and hundreds wounded in clashes between opposing sides throughout the country.

An important first step, the Tamarod movement issued a statement inviting youth from the Brotherhood to rejoin the people, and not be driven by calls for violence or terrorism. The June 30 front comprised of the secular opposition National Salvation Front bloc and the Tamarod campaign has also issued statements condemning the violence at Cairo University and Brotherhood headquarters and calling on the army to protect all citizens from attack.

Having accepted the democratic process as the legitimate path to power, and then successfully played the democratic game, many Brotherhood supporters are angered and disillusioned by what is essentially the overthrow of a democratically elected president. They have made electoral legitimacy the most pertinent form of democratic legitimacy while the opposition vehemently disagrees, arguing that elections do not equal democracy.

There are two particularly valid fears regarding the Brotherhood at the moment, and it is the opposition’s responsibility and in its interests to make an aggressive, concerted effort to quell those suspicions. First, there is the concern that removal from power after gaining it through a relatively legitimate electoral process will radicalize the Brotherhood and even discourage it from engaging in the system. Second, the memory of Nasser’s brutal 1954 retaliation against the movement for an alleged coup attempt resulting in its ban, massive imprisonment and torture of its members and members fleeing the country, lives on.

As much of the country is celebrating tonight, there is also fear of an army crackdown on the Brotherhood. The onus is also on the June 30 Front to also help steer through the politics of this crisis. They must stand firm in denouncing any sort of Brotherhood witch hunt and make clear from the beginning that they it will not be accepted. Feeling robbed of what they view as a legitimate hold on power, the opposition needs to clearly, vocally and repeatedly reassure the Brotherhood that Morsi’s removal is due to his political and economic failures, and that this is not an attack on the organization. Even if untrue, how the current crises is framed by the opposition and the language it uses will be crucial in setting Egypt’s future course.

The opposition must make clear that the Muslim Brotherhood will be a welcome part of political life in the future — free to contest elections, to protest, to organize, to exercise freedom of speech — and that it will not be persecuted. State institutions must fulfill their obligation to protect all citizens of Egypt from any violence directed against them, and anything less must be vigilantly condemned. Although currently vilified, the Brotherhood is still a significant part of Egyptian political life that will not simply go away after whatever happened today.

From its own political exclusion in the past year and where that has brought Egypt currently, the opposition must be aware that trying to exclude the Islamists — Muslim Brotherhood or Salafist — from any new transitional government implemented by the military is not an option for rebuilding the desired, pluralist Egypt. It will only create strife and bitterness and fuel discord.  Like them or not, the Islamists are a part of the Egyptian political fabric. Their voice must be respected, and they must be assured of this.

While the army will define the course of action over the next few days, it is up to the opposition to define its tone. The opposition must be willing to forgive past transgressions and remind the Islamists and the military that even if the Brotherhood put the Islamist project first, the opposition will honor the democratic values of pluralistic inclusion, and most important, put Egypt — all of Egypt — first.