Was Morsi's Ouster a Coup Or New Egyptian Revolution?

Egypt’s new uprising has for now delivered what the people wanted, and they know they can do it again, if necessary. 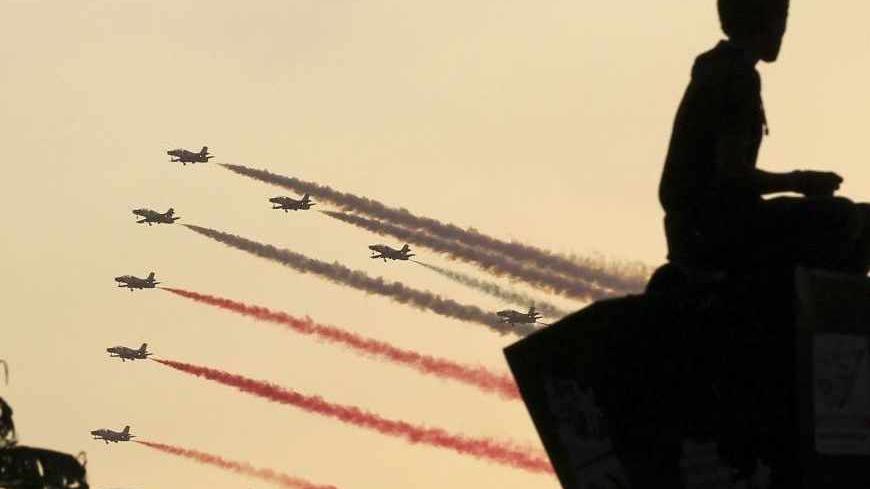 A man is silhouetted against the sunset as Egyptian military jets fly in formation over Tahrir Square in Cairo, July 4, 2013, a day after the military ousted the country's first democratically elected president, Mohammed Morsi. - REUTERS/Mohamed Abd El Ghany

Egyptians did it again! Exactly one year after Mohammed Morsi was sworn into office as president before the Supreme Constitutional Court, on June 30, 2013, millions of Egyptians demonstrated, demanding early presidential elections or Morsi’s departure. As Morsi failed to respond to the people’s demands by the end of a 48-hour ultimatum from the military, the armed forces informed Morsi at 7 p.m. on July 3 that he was no longer president. Shortly afterward, Abdel Fattah al-Sisi, the head of the military, read an eight-minute statement signaling a new transition.

The statement carried several important messages. It explained the many attempts that the military had initiated to alert Morsi to the national security threats facing Egypt as a result of his divisive policies from as early as November 2012, when Morsi issued decrees that put him above the law and placed his decrees outside judiciary scrutiny. A clear warning that the Egyptian state was on the brink of collapse was given by the army chief in January. Sisi also reminded the people that the armed forces had extended several invitations for dialog to end the political deadlock, which were all rejected by the presidency. But the most important message was that the army will not rule as it did in the first transition period after Jan. 25 revolution. Sisi consulted with various political leaders, who included Mohamed ElBaradei, Tamarod young leaders, Al Nour Salafi party, the head of Al-Azhar institution, and the Coptic pope to develop the outline of a “future roadmap” which included appointing Chief Justice Adly Mansour, head of the Supreme Constitutional Court, as interim president per Egyptian constitutional traditions. Mansour was sworn in as president coincidentally on the Fourth of July and will temporarily have the power to issue constitutional declarations while a committee representing various political forces will draft amendments to controversial articles in Egypt’s Constitution.

Many analysts have been busy wondering if this was a coup or a revolution. Most Western media describe what happened as a coup against a democratically elected president. President Obama was careful not to use the word “coup” (defining Morsi’s ouster as a coup could cause a cutoff of US aid to Egypt), but did urge swift return to democracy. The Muslim Brotherhood and many of its supporters do see this as a coup and warned of the consequences. Egyptians supporting the revolution see this exactly as what happened in the Jan. 25 revolution, where the military played a pivotal role in endorsing the revolution — whether directly by publicly recognizing the demands of the protesters at an early stage and pressuring Mubarak to step down, or indirectly by refusing to use force to quell the protests. Egyptians wonder why it is different now and suspect a hidden US agenda and all kinds of conspiracy theories.

Whether this should technically be classified as a revolution, a coup or a “recolution” — a remake of a popular coup following a people’s uprising — most Egyptians reject using the term coup since the Army did not in the end grab power. Deeply relieved, most Egyptians could care less what the correct term is to use. The people have gotten what they wanted and once again asserted their power and ability to change the regime, and they know they can do it again if necessary. Most Egyptians seem to think that Morsi had to be impeached because he unconstitutionally expanded his powers, divided the country and threatened Egypt’s national security and the country’s interests. As one person put it: “If you take a taxi and after a few hundred meters you discover the driver is drunk — and you ask him to stop (or call for early elections) so you can avoid a looming accident, but he refuses — you have no choice but to call the cops.”

A military spokesman tried to reach out to Islamist youth by assuring them that the armed forces will not allow their intimidation or exclusion. But today (July 4) several Islamist Channels were shut down and many Muslim Brotherhood leaders were arrested, including its supreme guide, whose hoped-for downfall was a key element in protesters’ chants; Khairat el-Shater is rumored to have been the ultimate decision-maker in Egypt during Morsi’s rule. Morsi himself is under house arrest. Whether these are precautionary measures or a sign of more things to come would probably depend on the response of the Muslim Brotherhood itself. Sisi mentioned in his speech developing a code of ethics and professional standards for the media, possibly banning hate speech and inflammatory incitement,  which was the main commodity found on the Islamist extremist channels.

The future of the Muslim Brotherhood depends on how it will evolve to recover after this miserable failure. Will it be able to regroup in legitimate, transparent organizations and develop an ideology to become more open, inclusive and modern? Or will it continue to function as an international secret underground society operating its own totalitarian parallel state, a state-within-the-state? The Muslim Brotherhood secretly owns and/or controls businesses, political parties, militias, media institutions, schools, hospitals, charities, syndicates and even student unions, using front men and dummy legal structures as a façade while all decisions are made by the supreme guide and his bureau. This style may have been suitable while the organization was banned and had to work in secrecy. Failure to upgrade its methods even when the organization came to power created an impossible situation: A country like Egypt was governed by a group of people who still thought and acted like an underground organization. Will the Brotherhood be able to learn from this harsh lesson, undergo necessary changes and adapt to the current realities and the new times, the new ways of doing things; or will it continue to be fixated with claims of “Morsi’s legitimacy” and push the country into a bloody path of violence and continued confrontations inevitably leading to its total extinction in Egypt and possibly worldwide?

These breathtaking events in Egypt have suddenly brought new players to the spotlight. Tamarod young leaders seem much more mature, eloquent, politically versed and responsible than the thousands of revolutionaries who appeared with the Jan. 25 revolution. They have specific demands; mostly they know what they are doing and are willing to learn for what they don’t. They sought advice and guidance from key figures such as ElBaradei and opposition leader Hamdeen Sabahy. Also, the National Salvation Front (NSF) emerged victorious from the June 30 revolution but the NSF will need to work hard to switch from being in opposition to becoming better geared to run in elections and adequately qualified to even possibly govern.

The road ahead is full of challenges. Egyptians may be celebrating today. But they will eventually have to wake up to the harsh realities. The economy is in shambles. Foreign reserves are depleted. The pound is at a record low. A divided society needs immediate reconciliation. Tourism is at its weakest in decades. And the Muslim Brotherhood seems, at least for now, determined to fight back. The long road ahead needs hard work, prudence, and a consensus-seeking spirit of forgiveness, reconciliation and compromise. But the early signs are encouraging. Arab countries such as the United Arab Emirates and Saudi Arabia expressed a willingness to give much-needed assistance. The stock market went soaring on the news of Morsi’s removal and the declaration of what looks like an early roadmap.

So for now, Egyptians have plenty to celebrate, most importantly a sense of recapturing a country which was literally on the brink.

Wael Nawara is an Egyptian writer and activist. He is also a co-founder of Al Dostour Party, The National Association for Change and El Ghad Party. He is formerly president of the Arab Alliance for Freedom and Democracy (AAFD), and was a visiting fellow at Harvard’s Institute of Politics.