The political powers in Egypt are divided over whether to celebrate the anniversary of the January 25 Revolution, but they all expect bloodshed. 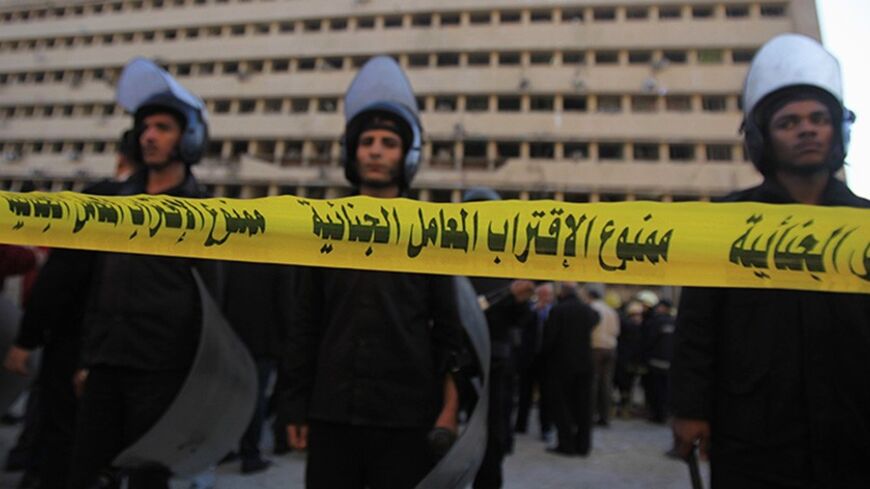 Bombs exploded across Cairo  on Jan. 24 in advance of a day many expected to be bloody reminder of Egypt’s fractured political landscape. As the country approaches the third anniversary of the January 25 Revolution, Egypt’s political forces are split among those who plan to celebrate, those who will demonstrate, and those who plan to boycott. The occasion provides an opportunity to compare the positions of Egyptian parties today and over the past two years toward celebrating the revolution.

Wahid Abdel Magid, the official spokesman for the National Salvation Front (NSF), informed Al-Monitor that the NSF has not adopted a unified position on participating in events commemorating the revolution's third anniversary. He predicts celebratory scenes and peaceful protests as well as violent and bloody demonstrations.

Among the organizations under the front's umbrella, the Wafd Party, the Free Egyptians Party, and the Conference Party all announced that they will participate in celebrations taking place on Tahrir Square and in some provinces. The Egyptian Social Democratic Party, however, decided not to celebrate, contenting itself with organizing events at the party’s branches and visiting the families of the martyred and wounded. The Constitution Party has not announced an official position on celebrating. The party’s branches in Port Said, Beheira and al-Monufia governorate, however, issued statements announcing that they will not be taking part in public celebrations, in part to demonstrate their rejection of what they called the “state of sharp polarization in Egyptian society” as well as for security reasons related to possible confrontations with supporters of deposed President Mohammed Morsi.

The NSF and its constituent parties took part in demonstrations on the second anniversary of the revolution, in 2013, when they called for demonstrations and rallies to be held in rejection of Morsi's policies. This was a way of “re-appropriating the revolution,” as they described it. The NSF was then the largest bloc opposing Morsi’s administration. Before the NSF was formed and during the tenure of the Supreme Council of the Armed Forces, the Wafd and the Egyptian Social Democratic parties had celebrated the first anniversary of the revolution. The Free Egyptians did not partake in celebrations that year “because there was nothing to celebrate,” according to a statement issued by the party at the time.

May Wehbe, a member of the Tamarod movement’s political bureau, told Al-Monitor, “Celebrations are not the only reason to participate.” She affirmed that the Muslim Brotherhood would attempt to storm Tahrir Square and protest there, which necessitated that revolutionary forces rally to “protect the square and prevent the occurrence of anything similar to the Rabia al-Adawiya sit-in.”

Wehbe clarified that this goal did not preclude celebrating, and added, “It is our right to celebrate the anniversary of our revolution, but clashing with the Brotherhood is not our main goal.” She indicated that Tahrir and Ittihadiya squares would be the loci for celebrations and that the interior minister had promised her organization that strict security measures would be implemented around the areas of celebration and the places where Muslim Brotherhood rallies were expected to be held.

Magdi Karkar, secretary-general of the National Alliance to Support Legitimacy, said that Jan. 25 would see the continuation of the alliance’s efforts to mobilize Egyptian's and to demonstrate. He indicated that their demonstrations will not be centralized and will steer clear of Tahrir and Ittihadiya squares, with each region’s leadership determining the location for demonstrations. The alliance’s two main components are the Muslim Brotherhood and its political wing, the Freedom and Justice Party.

The Brotherhood participated in the first anniversary of the revolution, as well as the second, for which it organized a wide-ranging campaign of services under the banner “We rebuild Egypt together.” Karkar told Al-Monitor that he expected this year's celebrations to be similar to those commemorating Oct. 6 in 2013, when “supporters of legitimacy” were martyred and wounded at the hands of the police and citizens.

Road of the Revolution Front

The “revolutionaries” of the Road of the Revolution Front are organizing two rallies that will head toward Tahrir Square to commemorate the revolution. In a statement, the members presented five demands: that [Gen. Abdel Fattah] al-Sisi’s candidacy for the presidency be rejected; that the Demonstrations Law be repealed and military courts halted; that the Interior Ministry be purged and the current minister dismissed and prosecuted; that all detainees be released and those convicted by military courts retried; and that the security and army forces keep their distance from squares and universities.”

The front includes representatives from the April 6 Movement, the Ahmed Maher Front and the Strong Egypt Party. The April 6 Movement participated in the first anniversary of the revolution to demand that governance of the country be surrendered to a civilian authority and the “rule of the military” ended. The movement participated in 2013 in demanding that the 2012 constitution be amended.

Shaaban Abdel Alim, a member of the Nour Party’s Supreme Council, said that the party would not take to the streets on Jan. 25. He explained to Al-Monitor that the general tendency was for mobilization and countermobilization, which would necessarily lead to bloodshed. He thus expects the day to be marred by clashes between demonstrators and security forces or between opposing demonstrators.

The Nour Party had announced its participation in activities on the first anniversary of the revolution to “celebrate the achievements of the revolution and affirm the need to achieve the goals of the revolution according to the roadmap established by the Supreme Council of the Armed Forces.” The party did not, however, take part on the second anniversary, hoping to avoid bloodshed between supporters and opponents of Morsi on that day.

First, the civil parties — the Wafd, Free Egyptians, Social Democratic, and others — are not as aggressive in their opposition to non-Islamic regimes as they are toward Islamic ones. They have reservations about the current government of Hazem el-Biblawi, just as they had reservations about the Brotherhood’s regime and its governance. Regardless, they decided to celebrate this year and not demonstrate against the regime, notwithstanding that they demonstrated against the Brotherhood’s regime last year.

Second, youth parties, such as the April 6 Movement and the Revolutionaries Front, oppose all regimes — whether the military council’s, Morsi’s or the current transitional one. Yet, one powerful youth movement, namely, the Tamarod Movement, actually endorses the current regime and will be present in Tahrir Square on Jan. 25. As a result, both currents' ability to mobilize will be tested, particularly considering that they both will be rallying in the main squares.

Third, the Muslim Brotherhood considered that the revolution had been forsaken during military council rule. Furthermore, its practices were widely rejected when it assumed power, and it is now unable to find allies who will agree to mobilize with it. As a result, the Brotherhood favors keeping its distance from Tahrir Square.