What Does the Brotherhood Want?

As the majority of Egyptians suffer through the slumping economy, the now-banned Muslim Brotherhood continues demonstrating for the reinstatement of deposed president Mohammed Morsi. 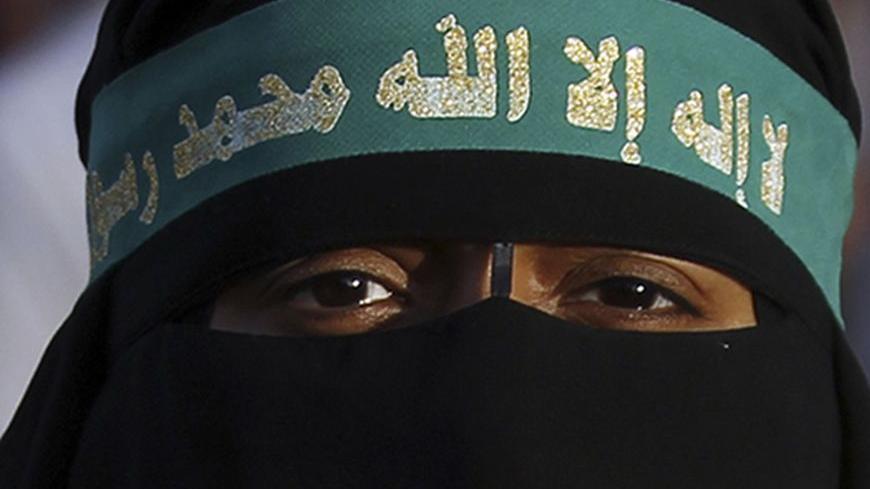 A supporter of the Muslim Brotherhood and ousted Egyptian President Mohammed Morsi takes part in a protest against the military near Rabia al-Adawiya Square in Cairo, Oct. 4, 2013. - REUTERS/Amr Abdallah Dalsh

A number of youths from the Muslim Brotherhood met with Ahmed al-Muslimani, media adviser for interim Egyptian President Adly Mansour, to discuss how to “contain” and socially and politically engage Brotherhood youths.

After the meeting, Islam El Katatni, a Brotherhood dissident and creator of the Think and Come Back initiative, announced that the ball was now in the presidency’s court to implement the cultural and economic ideas he proposed as an alternative to sole reliance on a security approach for drawing in young people defecting from the Muslim Brotherhood and integrating them into society to take advantage of what he called their “tremendous human potential.”

Amr Emara, coordinator of the Brotherhood Youth Alliance, had withdrawn from the meeting after Muslimani refused to give participants what he considered to be sufficient guarantees. He said that out of the 20 people invited by the president, only six attended. Emara shed light on the conundrum faced by his group, which defected from the Brotherhood and, according to him, was the first such group to ask the Brotherhood’s leadership to disperse the Rabia al-Adawiya and al-Nahda sit-ins as well as the first to demand that the Brotherhood leaders responsible for the spilling of blood in the Ittihadiya and Republican Guard incidents be “sentenced to death.”

As a result of its positions, Emara's group now finds itself threatened with death by the Brotherhood’s leadership because of its defection and, at the same time, is hounded by the community that, according to him, does not want to see any Brotherhood affiliates engage in political activity. Furthermore, he feels his group is being marginalized by a government that only seeks to create a “media show” through the reconciliatory meetings it holds with young Islamists. It is worth noting that 200 Brotherhood youths signed the founding statement of Emara's “alliance,” which was formed on August 1, two weeks before the dispersal of the Rabia sit-in. The alliance is now trying to establish a political party under the banner Youth for Egypt and has so far collected more than 7,000 signatures in the effort.

The Brothers Without Violence movement condemned the meeting between Muslimani and the young dissidents. Its spokesperson, Hussein Abdurrahman, said that they had rejected the president’s invitation because, according to him, it lacked a clearly defined purpose. Former Brotherhood leader Tharwat El-Kherbawi also declined, but for other reasons. He dismisses the idea of “returning to the principles of the Brotherhood’s founder Hassan al-Banna,” which, he thinks, these young people still espouse.

Traded accusations have become the norm as one group accuses another of not belonging to the Brotherhood, an allegation that is difficult to refute when dealing with a secretive organization that lacks public rosters or membership lists. Mahmoud Hussein, Brotherhood secretary-general and currently a fugitive living in Turkey, asserted, “The president’s meeting with those who claim to be dissident Brotherhood youths is a well-known form of conspiratorial behavior adopted by the successive military authorities, in order to feign the existence of disagreements or splits within the Muslim Brotherhood’s ranks. These attempts will fail, as they have throughout the organization’s history.”

On the other hand, Ahmed el-Sharkawi, coordinator of Reporters Against the Coup movement, acknowledged the existence of rifts within the Brotherhood's ranks, but dismissed their significance, stressing that they do not seriously affect the organization. Furthermore, he considered the meetings with dissenting youths to be the brainchild of what he called the “security state” striving to create an entity parallel to the Muslim Brotherhood and use it to pretend that a political dialogue exists that includes the Brotherhood. In his opinion, those currently partaking in the dialogue with the president do not represent Brotherhood youths, whom he believes to be leading the protests in the streets today.

While some dissenters and affiliates of the Brotherhood attempt to establish a dialogue with the regime, others are embarking on a completely different path. On Friday, Oct. 4, a group of Brotherhood demonstrators assaulted the journalist Khaled Daoud, beating and stabbing him. Daoud is the media spokesman for the Al Dostor Party and former official spokesman for the National Salvation Front (NSF). The attack occurred despite Daoud having resigned his NSF post out of sympathy for the Brotherhood and to protest what he described as “the authorities’ use of excessive force to disperse the Rabia al-Adawiya and al-Nahda sit-ins." Another Brotherhood-affiliated group assaulted Buthayna Kamel, a television presenter and a leading figure close to the NSF. The attackers smashed her car window because, according to her, she had waved an Egyptian flag during celebrations in the Dokki neighborhood held to commemorate the 1973 October War.

While most Egyptians observed the anniversary on the war on October 6, the Brotherhood chose that day to attempt to overrun Tahrir Square, where crowds were celebrating. Elsewhere, bloody battles erupted between Brotherhood members armed with pistols, shotguns and automatic weapons and the inhabitants of Ramses, al-Muhandiseen, Dokki and other Cairo neighborhoods. Less-intense clashes erupted in other governorates. The toll of all this was 51 people dead and 268 injured, so far, according to the Ministry of Health. Despite the high number of casualties, the Brotherhood announced that it would organize more demonstrations for Friday, October 11.

Most Egyptians responded to these events with outrage. Guests on talk shows compared the October War, which ultimately liberated Sinai from Israeli occupation, with the ouster of Mohammed Morsi, which led to the liberation of Egypt from the “Brotherhood occupation” as well as the liberation of Sinai from terrorist hands. The Brotherhood’s decision to pick October 6, when Egyptians celebrate their military, to hold demonstrations that condemn and denounce the army and lead to high casualties raises questions about the wisdom and efficacy of the Brotherhood’s strategy, if there is one.

Some Brotherhood members are wagering that continued clashes, demonstrations, civil disobedience and sabotage will disrupt the economy and push the country toward bankruptcy, which will result in the complete collapse of the state. The Brotherhood is also betting that the continued skirmishes and rising casualties will erode the legitimacy of the current regime and spark a rift within the June 30 alliance, providing them the chance to attract allies from the ranks of the revolutionaries. Furthermore, they are hoping that the mounting casualties will bring added international pressure and break the Egyptian people’s resolve under the weight of mounting bodies.

Without dismissing the negative impact of the Brotherhood’s strategy, its hopes seem futile even if they succeed in straining the resources of the state. Popular rejection and negative sentiments against the Brotherhood are only increasing with each episode of stalled traffic as a result of their demonstrations, with the growing number of those injured during confrontations with the Brothers and their supporters and with the continuing economic misery and hardships of daily life suffered by average Egyptians, who blame these problems on the Brotherhood and now the war of attrition they are waging against the people. As a result, it will be impossible for the Brotherhood to return to power for years, the number of which grows exponentially each time the Brothers push to implement their failed tactics.

Egyptians must also hasten to implement the political road map, prepare for elections and adapt to the Brotherhood’s demonstrations while striving to prevent or at the least minimize casualties. The Egyptian people may have to learn to live with the Brotherhood’s daily provocations, which will abate with time, because the war of attrition being waged by them will hopefully weaken the organization’s finances and logistics more than it will the Egyptian state. At the same time, the wheels of the economy will force everyone to come to their senses and return to normal or quasi-normal life. In the end, 85 million Egyptians cannot be made to stop feeding their families because the Brotherhood wants to hold demonstrations and rally in support of Morsi’s legitimacy and his reinstatement to power.

Wael Nawara is an Egyptian writer, activist and columnist for Al-Monitor's Egypt Pulse. He is also the co-founder of the Al Dostor Party, the National Association for Change and El Ghad Party. Formerly president of the Arab Alliance for Freedom and Democracy, he was a visiting fellow at the Institute of Politics, Kennedy School of Government, Harvard University. On Twitter: @WaelNawara