The conflict in Egypt is not about who rules, it's about “what to rule” — the state of Egypt or the Brotherhood’s Islamic state? 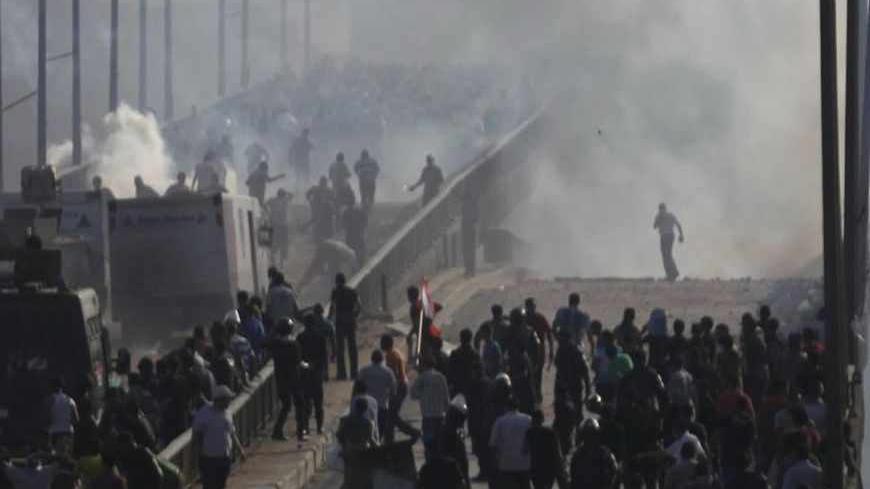 The conflict between the state of Egypt and the Muslim Brotherhood has reached a deadly point. After weeks of anticipation, on Wednesday morning [Aug. 14] police moved in to clear two Brotherhood encampments in Giza and east of Cairo. Police moved alongside bulldozers that removed barricades and sand fortifications erected by the pro-Morsi supporters. The operation was mostly covered live by Egyptian state TV and several other private stations. Al-Nahda, the much smaller sit-in, was also the easier site to disperse. The Rabia al-Adawiya sit-in was much tougher, but it was mostly cleared by sunset.  The death toll from the Rabia al-Adawiya sit-in in Nasr City reached 202, with 87 reported deaths from the al-Nahda site, according to a Health Ministry spokesman. The total death toll nationwide stood at 525, including 43 security troops, according to the latest Health Ministry figures.

In the morning, security released information that it has intercepted communications from Muslim Brotherhood leaders who commanded their members to wage a wave of attacks on police stations and government facilities. During the day, these threats were realized with several police stations stormed, and government buildings and military installations attacked. More than 40 churches and several Christian schools were also attacked and some set on fire in six governorates. Muslim Brotherhood members further attempted to block several key roads in Cairo, Giza, Alexandria among other places around Egypt.

In Egypt, if you ask a question, you are often answered with another question. So, to the question, “Why was it so necessary to clear these sit-ins fully knowing that the blood toll was to be so high?” the answer would be, “If it's not too important, why did the Muslim Brothers’ react by setting the whole country on fire?”

For six weeks, yard by yard, the Rabia al-Adawiya encampment expanded its borders, creeping to claim kilometer after kilometer of neighboring streets, including the Autostrade road, which connects Nasr City and the rest of Cairo to the city’s airport. Until one day, Rabia al-Adawiya was no longer a sit-in, but a sprawling town, even a city-state, with fortifications, internal police force, complete with torture camps and border control officials. Rabia al-Adawiya came to manifest the Muslim Brotherhood’s “Parallel State.”

The White House condemned “the use of violence against protesters,” urging the government and “all parties in Egypt to refrain from violence and resolve their differences peacefully.” Mohamed ElBaradei, Egypt’s vice president for international relations, resigned, similarly signaling his disapproval of the bloodshed. But the National Salvation Front (NSF), which ElBaradei led until recently, praised the police and the government for their actions on Wednesday. In February, ElBaradei came out rejecting participation in elections under Morsi’s rule, practically preempting the NSF’s internal deliberations on the matter. As a result, NSF came under moral pressure to announce a similarly “revolutionary” stance, also boycotting elections. But really, when you reject elections, and hope for military intervention siding with massive popular demands to remove a president, what did you think will happen next?

As explained in a previous article for Al-Monitor, the conflict between the state of Egypt and the Muslim Brotherhood’s “parallel state” had reached an existential phase, where for one to survive, the other had to go, at least ideologically and organizationally. Over the past two and half years of the Egyptian revolution, several sit-ins were dispersed in Tahrir and other squares, with very few casualties, if any. It was never a big deal. But this was not just a sit-in, this was the flashpoint in an 85-year conflict between two states, the Muslim Brotherhood’s with its promised Caliphate state and the Egyptian national state, the oldest state history has known. Political factions can negotiate and split seats of power; people from different races, faiths and walks of life can coexist, but two states trying to govern the same people on the same piece of land cannot be together. This is the nature of the conflict now in Egypt and this is one explanation why the Brotherhood fights this battle as if it was Armageddon.

The Muslim Brotherhood has reached a point where it sees this as the last battle — so, it's either win it or die as a “martyr,” which is exactly the religious narrative used so passionately by Beltagy, Safwat Hegazi and other Brotherhood leaders to emotionally charge their supporters at Rabaa to pick from these bloody choices, victory or death. And while many Brotherhood leaders are safely hiding far from the martyrdom they had so poetically described to their supporters, we should not expect the end of this conflict any time soon. The Muslim Brotherhood elements all over the country are playing what could perhaps be their final cards. Spreading chaos and pushing the country into civil war. Toward that end, they are bringing out all their tricks. The sectarian card started with burning churches and Christian missionary schools, attacking shops and Christians' homes in Upper Egypt, hoping to start wide sectarian battles. Another important card is the collapse of security. To achieve that, Muslim Brotherhood members and Islamists have managed so far to storm several police stations, releasing prisoners and stealing arms. The government response was to impose a state of emergency and night curfew for a month.

Was it worth it? This wide confrontation between the Egyptian state and the Islamists took place several times before, most notably, when Sadat was assassinated in 1981. Many people see this confrontation as imminent and unavoidable — and that if it was allowed to take place two or three years from now, the Muslim Brotherhood would have been able to infiltrate and split the army, and hopes for restoring order without dividing the country would have been slimmer. While we're now horrified by the death of hundreds, if the country were in a state of a civil war in which two armies fight, the death toll could climb from hundreds to hundreds of thousands.

Imposing a state of emergency for a month shows that the government has no illusions of a speedy and peaceful resolution to the situation. Will the Egyptian state withstand this testing moment? The state, which is in fact entrenched into the minds of Egyptians and their way of life, has seen and lived to tell the stories of difficult days like this before. Let us hope that Egypt, and every one of its people, lives to tell this one.

The conflict in Egypt is not a dispute over percentages of election gains. It's not about who rules. It's rather about “what to rule”: the state of Egypt — or the Brotherhood’s state.