Al-Monitor’s coverage of the bloodshed in Egypt. 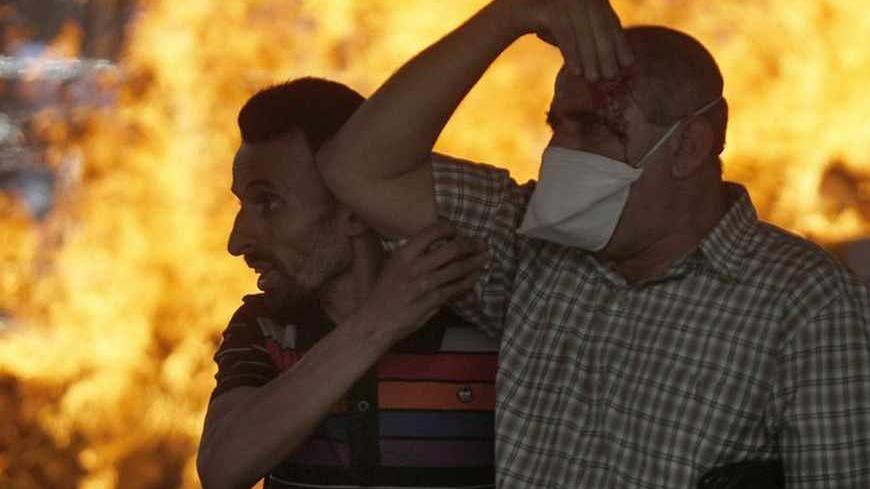 As this article is posted, approximately 700 Egyptians have reportedly been killed and more than 4,000 injured in the bloody confrontation between the Egyptian security forces and the Muslim Brotherhood.

Wael Nawara places the blame for the violence on the “scorched earth” policy of the Muslim Brotherhood, not the Egyptian government, and warns that the conflict is not over:

“While many Brotherhood leaders are safely hiding far from the martyrdom they had so poetically described to their supporters, we should not expect the end of this conflict any time soon. The Muslim Brotherhood elements all over the country are playing what could perhaps be their final cards. Spreading chaos and pushing the country into civil war. Toward that end, they are bringing out all their tricks. The sectarian card started with burning churches and Christian missionary schools, attacking shops and Christians' homes in Upper Egypt, hoping to start wide sectarian battles. Another important card is the collapse of security. To achieve that, Muslim Brotherhood members and Islamists have managed so far to storm several police stations, releasing prisoners and stealing arms. The government response was to impose a state of emergency and night curfew for a month.”

Nawara writes that the conflict is not just about "who rules" in Egypt, but rather "'what to rule': the state of Egypt — or the Brotherhood’s state.”

Zenobia Azeem despairs that the confrontation has come at the expense of Egypt’s integrity: "The price for 'fixing' the Brotherhood’s election may prove perilous and regressive for Egypt. While many Egyptians see this as a struggle between the integrity of the state and the Brotherhood, it is worth remembering that the state they are seeking to preserve is the same one that the 2011 revolution sought to bring down in favor of democratic, civilian rule based on the rights, freedoms and dignity of all of Egypt's citizens."

Ayah Aman provides Al-Monitor with a chilling, first-hand account of the siege of the Rabia al-Adawiya field hospital by Egyptian security forces on Aug. 14: "[M]embers of the internal security forces entered the building armed with tear gas and machine guns. They marched the women and all those able to stand, their hands up in the air, in a column like prisoners. A 15-year-old boy cried, 'I will not leave my father … Please leave us alone, they are all wounded. I swear to God that there are no weapons here … This is a hospital,' as he held the intravenous-drip bottle connected to his father, who nearly fainted from his injuries and the tear gas."

“Morsi, on the other hand, is a member of a group that has at best a questionable commitment to and a skewed understanding of democracy, and that — following a razor-thin electoral margin — moved quickly and aggressively to consolidate power. Mandela was a visionary, while Morsi was a short-term tactician who refused to see the benefits of building and reinforcing coalitions.

Mustafa Akyol, takes the line from Turkey that “there is no doubt that the Muslim Brotherhood is the victim of bloody events in present-day Egypt,” but argues that that the Brotherhood should learn from Turkey’s experience, if it is to survive the current crisis:

"How the Islamists of Turkey survived the coup [in 1997] and ultimately defeated it is worth looking at. Their secret was not defiance, let alone radicalization, but moderation. The reformists within Erbakan’s party, such as Recep Tayyip Erdogan, Abdullah Gul and Bulent Arinc, realized that while nothing could justify the coup, some of the provocative and triumphant rhetoric among their own people helped provoke it. That is why they decided to launch a 'renewal' movement in the party, which gradually evolved into the Justice and Development Party (AKP). Founded in 2001, the AKP made a clear break with the Islamism of Erbakan, using a pragmatic rhetoric which promised good governance and 'respect for all lifestyles,'" Akyol writes.

Semih Idiz, also writing from Turkey, argues that Prime Minister Erdogan’s strong criticism of the coup is driven “by a self-righteous political narrative that clearly has much more to do with developments in Turkey than in Egypt.” Pinar Tremblay explains that Erdogan is playing to “concerned Islamists” among his constituents and not worrying about a broader opposition.

Ben Caspit reports from Jerusalem that “Israel is keeping its fingers crossed for the Egyptian military in general, and its commander-in-chief Gen. Abdel Fattah al-Sisi in particular. Israel is watching US conduct with some amusement, but also with a similar degree of concern. The Americans are in a serious bind. On one hand, they cannot support a military coup or cheer the killing of hundreds of civilians. On the other, they understand that this is what the majority of Egyptians want, and they’ve started realizing that their gamble on the Muslim Brotherhood was a particularly stupid mistake.”

On Aug. 15, US President Barack Obama, in remarks on the situation in Egypt, said, “While we want to sustain our relationship with Egypt, our traditional cooperation cannot continue as usual when civilians are being killed in the streets and rights are being rolled back.”

Frank Wisner, who served as both US ambassador to Egypt and the Obama administration’s special envoy in 2011, told Al-Monitor’s Laura Rozen that the “Brothers thought they could defy the odds” and have not succeeded. Wisner cautioned US policymakers, however, from overreacting in response to the crisis: “Nobody wins” from the bloodshed and deepening polarization in Egypt, he said. “It’s just at a moment like this, one has got to recognize the limitations.”