A first-hand account of the siege of the Rabia al-Adawiya field hospital by Egyptian security forces on Aug. 14. 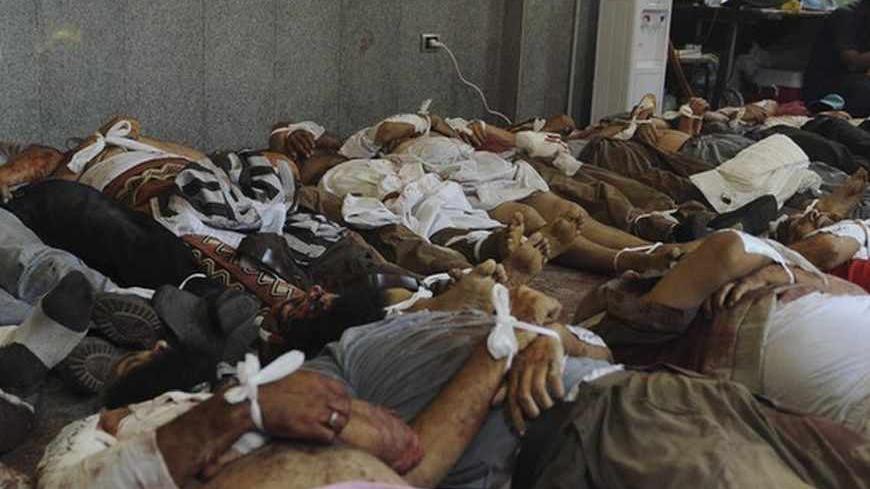 The dead bodies of Muslim Brotherhood members and supporters of deposed Egyptian President Mohammed Morsi lie in a room in a field hospital at the Rabaa Adawiya mosque, where they were camping, in Cairo, Aug. 14, 2013. - REUTERS/Amr Abdallah Dalsh

Blood stained the staircases and corridors. Screams from the injured filled six whole floors, where bodies lay torn apart by live ammunition, birdshot and shrapnel. Hundreds of corpses lay stacked in the main halls and corridors as the doctors' continuous cries for help echoed out while they tried, with minimal capabilities, to save whomever they could before the wounded gasped their last breath.

Hours after security forces stormed the perimeter of Rabia al-Adawiya Square to forcefully disperse the pro-Morsi sit-in, the hospital became the locus of a never-before-seen sight in Egypt.

“Keep your head low and run” came the warning from an individual standing a few meters from the hospital entrance. A sniper from the security forces had been targeting all passersby and visitors to the hospital to prevent the delivery of aid or medicine, which had been depleted inside. From the moment the confrontation started early Wednesday morning, Aug. 14, and until the hospital was overrun and burned, at least eight people were killed in the area, shot by a sniper atop a building facing the hospital entrance.

Bodies and mourners at the Al-Iman mosque, used as a make-shift morgue. (Yqeen News)

Despite the danger of entering the hospital, demonstrators had no choice but to come this way, tirelessly carrying the wounded and deceased from the square.

At the entrance to the hospital, dozens of wounded lay about the floor, suffering from bullet and birdshot injuries to the head, chest, shoulders and legs.

The small number of volunteer physicians and the lack of most medicines and medical supplies hindered efforts to aid hundreds of the wounded. There weren’t enough death shrouds or body fridges to accommodate all the corpses.

Dozens of family members milled around on the lower floor, asking in vain about their missing or deceased loved ones, but the sheer number of bodies made it impossible to tell them anything. One young man and one young woman kept a running count of their numbers and looked in pockets for any form of identification.

Most of the bodies were elderly bearded men. There were a few young men and one girl, Asma Beltagy, the 17-year-old daughter of Muslim Brotherhood leader Mohamed Beltagy.

"Like the Syrian army … [General Abdel Fattah] al-Sisi is a murderer,” cried a young wounded man, before he praised God and his soul left his body a few minutes after arriving to the hospital.

In the initial hours, those inside the hospital thought that it was safest place at Rabia al-Adawiya Square. The square itself was the target of devastating live fire from all sides after the security forces encircled it, blocked all exit routes and stormed it.

At 3:00 in the afternoon, warnings spread through the hospital that snipers were targeting doctors, after hundreds of live rounds impacted the walls and windows of the building. Everyone worked to move the wounded to the right side of the hospital, which overlooks apartment blocks, because security forces had been firing at all the windows that overlooked Rabia al-Adawiya Square and El Tayaran Street.

All the doctors performed their duties while in a crouched position, for fear that they would be targeted as they worked on the injured lying on the ground.

Gunfire aimed at the hospital remained incessant from 3:00 until 4:30 in the afternoon, during which time the number of wounded and killed reaching the hospital rose exponentially, to the point where all the floors were completely filled. Later, a loud explosion of unknown origin rocked the building and shattered all of its external windows.

At 4:00 p.m., security forces flooded all of the hospital’s floors with tear gas, which they lobbed into the corridors and rooms through the broken windows. The suffocating gas led to hundreds of the wounded losing consciousness, while doctors could be heard yelling for oxygen. But the large number of wounded and the difficulty of the situation prevented anyone from administering aid.

Amid all this, security forces belonging to the internal police agency began demanding over loudspeakers that everyone to vacate the hospital, or it would be stormed.

Less than 10 minutes later, members of the internal security forces entered the building armed with tear gas and machine guns. They marched the women and all those able to stand, their hands up in the air, in a column like prisoners.

A 15-year-old boy cried, “I will not leave my father … Please leave us alone, they are all wounded. I swear to God that there are no weapons here … This is a hospital,” as he held the intravenous-drip bottle connected to his father, who nearly fainted from his injuries and the tear gas.

The storming of the building and its evacuation lasted for no more than half an hour, during which security officers terrorized all those who were in the hospital and tried to remain there at the side of the wounded, cursing and beating them.

At 6:30 p.m., around sunset, all police officers and security forces hastily exited the hospital and the armored vehicle the police had used to break down the hospital’s entrance withdrew, before flames engulfed the whole building.

Security forces disappeared from the site as the hospital burned, while family members tried in vain to evacuate any remaining wounded from the lower floors.

Four hours later, what was once a hospital had become a charred shell. Dozens of young people arrived in a bus and, throughout the night, removed dozens of completely carbonized bodies from any remaining accessible areas.

By 6:00 the next morning, the number of bodies removed by the youth from the hospital reached 360, most of which were totally charred and belonged to wounded people who had, according to the testimony of one of the hospital doctors, been burned alive. All the bodies were later assembled at the Al-Iman Mosque located in the suburb of Nasr City, adjacent to Rabia al-Adawiya Square. The latest official death toll from the Ministry of Health at time of publishing was 638.