Following the coup that toppled former President Mohammed Morsi, Egypt’s journalists have faced abuse at the hands of state security. 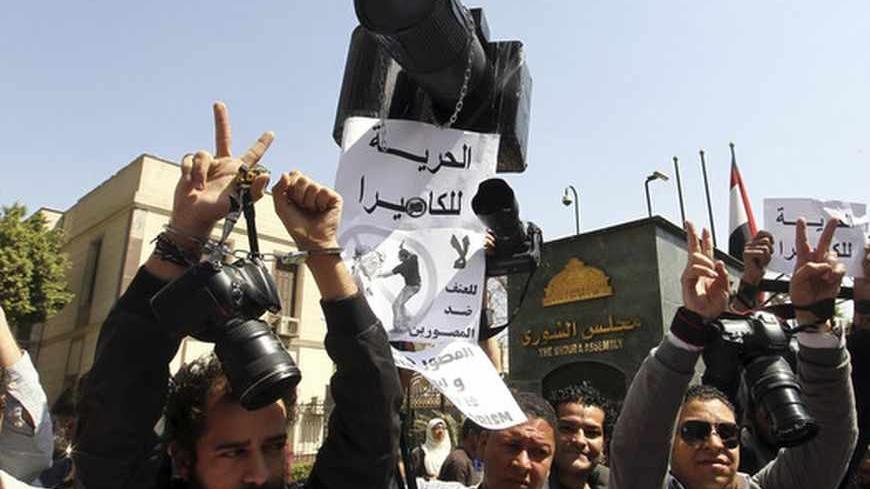 Photographers hold up placards as they protest the government policies and the Muslim Brotherhood's treatment toward photographers, in Cairo, March 19, 2013. - REUTERS/Khaled Elfiqi/Egyptian Photo Journalistic Society

Since the Egyptian armed forces took power following the ouster of deposed President Mohammed Morsi on July 3, violations against journalists have been nonstop. These include violence during demonstrations and after the curfew imposed on Aug. 13, one day before the anti-coup protests were broken up in Rabia al-Adawiya and Nahda squares.

The Egyptian Syndicate of Journalists has not issued any statements on how many of its members have been subjected to harassment or abuse. The Committee to Protect Journalists (CPJ) has also not released statistics regarding the total number of those arrested or assaulted since June 30. The CPJ did, however, issue a report on Aug. 19 documenting some of these violations. These violence has not been limited to preventing journalists from working, or smashing their cameras and computers, but has gone as far as killing them. According to the CPJ, of the 10 journalists killed in Egypt since 1992, five died following June 30 (with three of these deaths occurring during the breaking up of sit-ins on Aug. 14).

One example is the case of Ahmed Assem, of the Freedom and Justice newspaper, who was killed during the clashes between the army and the pro-Muslim Brotherhood protesters outside the offices of the Egyptian army in Cairo. His death was recorded on his own camera. Assem was filming the protests when one of the soldiers he was recording turned and shot him dead.

Tamer Abdel Raouf, a bureau head for Al-Ahram, was killed when soldiers fired at his car as he was passing through a security checkpoint during curfew.

However, his colleague Hamed al-Babari, a journalist from the Al-Gomhuria newspaper who was with him during the incident, denied these allegations. In his testimony, Barbari said that when they arrived at the checkpoint, minutes after the curfew, the soldiers prevented them from passing and demanded that they return. They abided by the soldiers' orders, but were caught off guard by gunfire, which hit Abdel Raouf in the head and killed him on the spot.

Nevertheless, the largest number of journalists and photographers were killed, beaten and arrested on Aug.14, when the army broke up the sit-ins in Rabia al-Adawiya and Nahda squares.

According to the Supporting Information Technology Institute, during these events five journalists were shot by the army, including cameraman for British Sky News Mick Deane. Moreover, 18 journalists were arrested and 33 were injured, either by gunshot or attacks by the police, not to mention the breaking and confiscation of equipment.

Mustafa al-Shami, a photographer for the Al-Masrawy news website, said that the police attacked him while he was photographing the bodies of protesters in Nahda Square. They pushed him to the ground and kicked him in the back and stomach, injuring his shoulder and smashing his camera.

As the general violence continues, so do violations against journalists. On Aug. 16, 2013, people in different Egyptian cities took to the streets to protest the killing of protesters opposed to the military coup. Firing tear gas and bullets, police forces, with the support of the army, obstructed these protests. During the skirmishes, Mohamad Ibrahim, a photojournalist for the Al-Badeel daily, was shot in the leg.

When the police tracked down protesters, hundreds of people — including journalists — were besieged inside the mosque in Ramses Square for more than 24 hours by thugs and security forces. Hiba Zakaria, a journalist for the Turkish Anadolu Agency who was among the protesters, told Al-Monitor that the army and police fired heavily on protesters, which compelled her and other individuals to seek shelter from gunfire in the mosque.

Zakaria, along with a number of other people, closed the door to keep the thugs from entering the mosque. According to Zakaria, the thugs surrounding them were protected by the police while individuals in the mosque appealed to security forces to protect them. It was an exercise in futility. The next day, when the army stormed into the mosque, they took her along other Egyptian and foreign journalists, including TRT’s Metin Turan, to vehicles to be transported away. Army forces cursed and attacked them. According to Zakaria, she was struck in the face and eye.

Zakaria said she did not call the head of the Journalists Syndicate after being subject to attacks. She said, “The syndicate is useless.” This statement was further affirmed by Nada al-Khawli, a journalist for Al-Shorouk daily, who was beaten during her coverage of the Muslim Brotherhood protests in June at the hands of thugs who attacked protesters with knives. Khawli told Al-Monitor that she tried to contact the head of the Journalists Syndicate, Diyaa Rashwan, to report the incident, only to be turned down under the pretext that he was too busy with finding a way to preserve the rights of journalists and solve the problem of low salaries.

The attacks on journalists and photographers were not only carried out by security forces. Some of these people faced problems while covering pro-Morsi protests. Sabri Khaled, a photographer for Al-Shorouk, told Al-Monitor that he was tasked with taking photos of the field hospital in Rabia al-Adawiya Square following the massacre that claimed the lives of scores of protesters at the hands of police forces. Yet, upon his arrival to the hospital, a number of doctors prohibited him from taking photos, saying that the Egyptian media is biased and has not said a word about those killed by security forces. They considered him, as a photographer, to be implicated in deceiving the public. Khaled could not challenge their demand and noted, “The environment inside was tense and filled with wrath, due to the large number of killed and wounded. I did not try to explain anything. I hastily walked out.”

The real number of journalists who were subject to attacks since the deposition of Morsi is still unknown. The Journalists Syndicate has yet to issue an official statement regarding the number of journalists who fell victim to attacks in the course of their work, be they killed, wounded or arrested. Many attempts to reach the head of the syndicate about what is happening to its members were fruitless. The only announced numbers of attacks against journalists remain those issued by nongovernmental organizations or through personal initiatives of activists who do not act in any official capacity.

Enhas Hamed was born in Cairo. She holds a BA in mass communication and a journalistic translation diploma from the American University in Cairo. She has worked in the investigations department in Shorouk newspaper and as a program editor for Al-Shark al-Awsat radio station. She is currently the head of the news team for the Shorouk website.