Egypt's new government is struggling to restore stability in the country after the latest wave of violence. 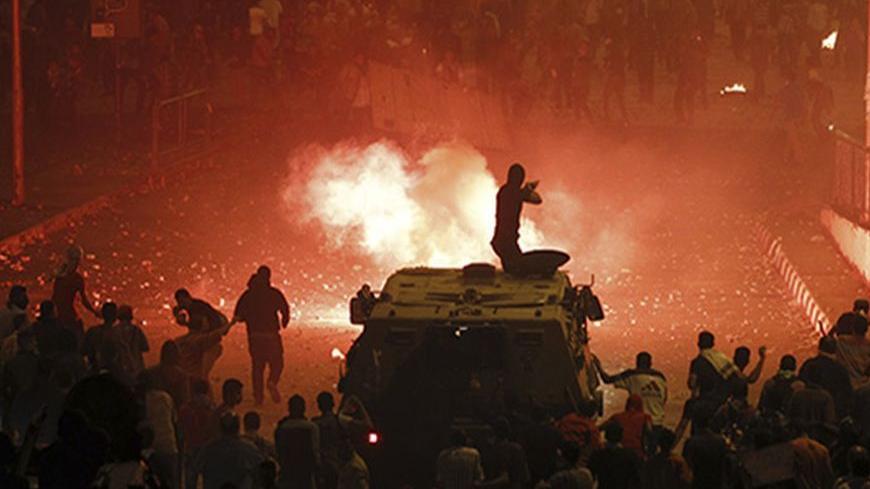 A policeman fires rubber bullets at members of the Muslim Brotherhood and supporters of ousted Egyptian President Mohammed Morsi at Ramsis Square during clashes at a celebration marking Egypt's 1973 war with Israel, in Cairo, Oct. 6, 2013. - REUTERS/Amr Abdallah Dalsh

CAIRO — Insecurity reigned over Cairo and some other Egyptian provinces after the violence that spread throughout the country on Oct. 6. The Egyptian security agencies tried to maintain control over the situation and secure vital installations following a number of terrorist attacks that targeted army and police forces. But the anger of the current regime’s opponents continued, and they insisted on holding marches and demonstrations that condemned the military’s rule and affirmed their intention to enter Tahrir Square and organize a sit-in there.

By the end of Oct. 6, the Egyptian Ministry of Health announced that 53 people had been killed and 271 critically injured following bloody clashes in Cairo and some other provinces between supporters of deposed President Mohammed Morsi, his opponents and security forces. Meanwhile, the state’s institutions remained silent on the events.

On the morning of Monday, Oct. 7, a series of terrorist acts were executed in response to the targeting of demonstrators by security forces. Unknown gunmen attacked an Egyptian army patrol in the city of El-Salhiya in al-Sharqiya province, killing one officer and five recruits after heavy gunfire hit a vehicle belonging to the Second Field Army. Unknown gunmen also attacked the South Sinai Security Directorate in the city of El-Tor with a car bomb that exploded inside the building, killing a police lieutenant colonel and three recruits, as well as wounding 58 others.

Terrorist operations did not end there. In the capital, gunmen targeted a military police force in the Al-Rimaya area of Giza province. This led to a gun battle that lasted for over 90 minutes. Another terrorist group called the al-Furqan Brigades fired two RPG rockets at the central satellite station in the south Cairo neighborhood of El Maadi, which damaged one of the transmission dishes, but did not lead to human losses.

In the wake of these terrorist attacks, Egyptian military and police security forces set up in a number of positions and deployed inspection patrols on the entrances to Cairo, inside the city’s main neighborhoods and along principal roads leading to Sinai and the Suez Canal cities. This was done in order to monitor and put an end to any suspect actions, as well as apprehend those involved in the violence.

Anxiety prevailed inside ministries, government institutions and schools, where armored police vehicles were deployed, and all important government buildings were searched for explosives. Most large squares, such as the Tahrir, Rabia al-Adawiya, Nahda and Mustafa Mahmud squares, were also closed off.

A security source at the Interior Ministry told Al-Monitor, “Security forces were making extraordinary efforts to try and put an end to the flood of terrorist operations,” as he described them, “while not ruling out that the Muslim Brotherhood was involved in all acts of violence.”

“We now have strict instructions to deal with all those who are tampering with the security of the country. We enjoy the trust of the people and of all leaders in the state,” he added.

The source, who preferred to remain anonymous, revealed that the Egyptian state requested European and foreign expertise in confronting terrorism.

“Now, we do not only need tear gas to confront the riots, we also need the means by which to detect and defuse explosives as well as car bombs. We need to import surveillance cameras in order to put in place measures to protect vital government agencies and installations as well as tourist sites,” he noted.

Despite the prevailing anxiety, marches condemning the heavy-handed treatment of demonstrators by security forces continued, with thousands of Egyptian university students organizing protests in Cairo and the provinces to decry the arrest of their colleagues during the events that marred the anniversary of the October 1973 war. The pro-Morsi National Alliance to Support Legitimacy insisted on demonstrating inside Tahrir Square, no matter the cost. It might also decide to increase the intensity of confrontations with security forces after the interior minister announced in a press conference that universities might be closed if demonstrations continued to be held on their campuses.

In a secret location of Cairo’s northeastern Fifth Settlement, Prime Minister Hazem el-Biblawi met with his cabinet’s Economic Affairs ministers, following security information that some cabinet members might be targeted and the government’s business disrupted. He had previously been forced to change the location of cabinet meetings and consultations on numerous occasions, preferring to conduct business from a number of locations far from Tahrir Square and the center of the capital, where the Council of Minister’s headquarters is located.

“The government agreed to increase the number of security reinforcements and ministerial guard details following the receipt of information that ministers might be targeted as part of the terrorist plans to undermine Egypt’s stability. Changing the location of meetings is a diversionary tactic aimed at thwarting those plans and preventing the disruption of government business, while allowing the administration to continue exercising its responsibilities,” said a security source at the Council of Ministers, in an interview with Al-Monitor.

Biblawi also held a meeting with security ministers on Oct. 8, during which it was decided that the Muslim Brotherhood be stricken off the Ministry of Social Affairs’ roster of civic organizations, in an attempt to curb the Brotherhood’s activities in Egyptian society.

“The minister of interior handed the cabinet a report about the terrorist factions that were involved in bomb attacks and the attempt against his own life. Announcing their identities is scheduled to take place soon and will happen once they are contained and apprehended,” an official source at the Council of Ministers told Al-Monitor.

The source affirmed that “The government was not considering raising, once again, the number of curfew hours, because it does not want to negatively affect the country’s economy and trade activity, now that a semblance of stability and recovery have been attained since the easing of the curfew. But it is possible that the state of emergency be extended until stability is restored, and terrorism is contained and eradicated.”

The unstable security situation, relatively new to Egypt, remains the biggest challenge for authorities as they seek to achieve stability, restore and revitalize Egypt’s economy and fulfill the demands of a populace which has become sharply divided about the government’s performance since June 30.