In switch, Egypt may join Ethiopia in Nile Dam project

In a surprising move, Egypt said that it will consider participating with Ethiopia in the construction of the Renaissance Dam, which it had staunchly opposed. 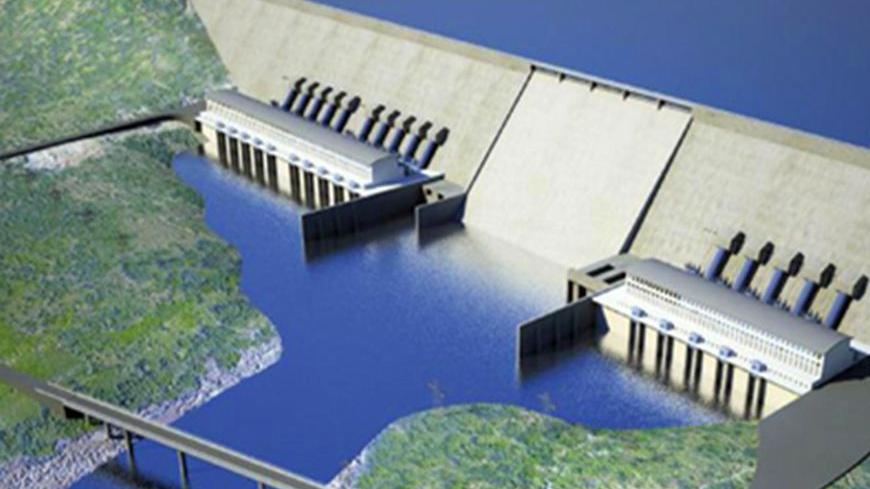 A rendering of the dam provided by Salini General Contractors, the Italian company inked to build the dam, March 31, 2011. - Wikipedia/Salini

Cairo and Addis Ababa may soon reach a truce to calm their dispute over the construction of the Renaissance Dam on the Blue Nile in Ethiopia. Both countries have recently shown good faith and agreed to negotiate about the project. Egypt has even agreed to take part in building the dam, though without declaring its conditions for doing so.

At a news conference Oct. 7, Ethiopian Prime Minister Hailemariam Desalegn announced that his country welcomes the participation of Egypt and Sudan in the construction of the dam and stressed that his government considers the dam to be jointly owned by Sudan, Ethiopia and Egypt. Cairo viewed his statement as a positive step toward reaching a consensus on the project, despite its earlier sharp criticism of it.

In a telephone conversation Oct. 17, Egyptian Minister of Water Resources and Irrigation Mohamed Abdul Muttalib told Al-Monitor: “Egypt doesn’t mind joining the Ethiopian government in building the dam for the service and development of the Ethiopian people. But we must agree on a number of items in a clear way to prevent any damage to Egypt as a result of the dam construction. The Egyptian government always opts for cooperation and participation. … During the coming negotiations with Ethiopia over the dam, we will clarify our position regarding the policy and method of operating the dam, the size of the storage lake attached to it, and how to fill it with water in times of flood and drought.” He stressed, “Egypt will definitely not participate in the construction unless these policies are agreed upon and agreements regarding them are signed.”

On Oct. 8, Ethiopian Minister of Water Alemayehu Tegenu had tweeted, “Great Ethiopian Renaissance Dam never be slowed down for a second[.]  We can pay any cost for it ... [sic].”

Egypt gets 55.5 billion cubic meters of Nile water annually in accordance with the 1959 agreement signed between Egypt and Sudan. About 85% of that share comes from the Ethiopian plateau, in particular from the Blue Nile tributary, on which Ethiopia intends to build the Renaissance Dam to store 63 billion cubic meters of water in and generate 6,000 megawatts of electricity. The Ethiopian, Sudanese and Egyptian water ministers are expected to meet Oct. 20-23 in Khartoum to discuss the May report of the Tripartite Commission on the repercussions of the dam and how to implement the report’s recommendations for avoiding harm to any of the Nile states.

On Oct. 8, Egyptian Prime Minister Hazem el-Biblawi met with the Supreme Committee for the Nile Water to agree on negotiating mechanisms for dealing with Ethiopia. The gathering ended with approval for Egypt taking part in the dam's construction.

An official Egyptian source following the Nile issue who asked to remain anonymous, told Al-Monitor on Oct. 16, “The government has prepared a new paper to negotiate with Ethiopia regarding the Renaissance Dam. Technical and legal teams have been tasked with studying the Egyptian [negotiating] items, which are expected to be presented to the Ethiopian side at the next meeting. … The Egyptian offer includes full participation in the construction, management and operation of the dam, by dispatching Egyptian engineers who specialize in the field of dam construction; the signing of an agreement with the Ethiopian side on sending [to Ethiopia] a permanent Egyptian water mission [that will be stationed] at the dam; and [Egypt’s] participation in the funding and working as an intermediary to obtain aid and international loans and grants to finance dam construction.”

The final report of the Tripartite Commission contained several technical remarks regarding how the dam might harm Egypt. Some experts therefore have reservations about the Egyptian government's sudden decision to participate in the project, especially if it is without considering the full consequences of such a decision.

Al-Monitor obtained a copy of the report prepared by the Egyptian government on the Tripartite Commission’s final report. The Egyptian document states that building and operating the Renaissance Dam according to the current specifications is not in the interest of downstream countries — Egypt and Sudan — and will enable Ethiopia to fully control the flow of the Blue Nile. Moreover, the time required to initially fill the dam reservoir, three years, will negatively affect Egypt.

The report pointed out that the study of existing designs showed a defect in the safety features concerning the secondary Saddle Dam. This, in turn, has the potential to affect the safety of the High Dam in Egypt. Most studies submitted by Ethiopia are preliminary and not meant for implementation purposes. In addition, no  environmental and social impact assessments on downstream countries have been conducted.

A diplomatic source involved in the negotiations among Cairo, Khartoum, and Addis Ababa  told Al-Monitor, “The sudden announcement of Egypt’s participation in the dam construction is linked to a number of factors that govern its relationship with Ethiopia. Egypt’s decision doesn’t mean compromising its water rights, but Egypt needs special capabilities in the next phase to negotiate and to hold on to its cards for pressure to not accept the dam if it harms [Egypt]. … The political administration in Egypt is aware of the serious [threat] the dam poses to Egypt’s water security. So first, we must agree on the construction and operation policies before signing any agreement to participate in the dam. [We must also] complete the technical and environmental studies to make sure that there is no harm to Egypt or Sudan. … The situation Cairo is now faced with is very complex, and the negotiating options are limited. Our position is the weakest because we are the most in need of water and because of our weak position on the African Horn after the freezing of Egyptian activity in the African Union. We have no choice but to accept the establishment of the dam.”

On the other side of the equation, the Ethiopian government announced in September that it had completed 30% of the engineering and technical preparations at the dam site and is ready to start building the main body of the dam. Sudan expressed its satisfaction with the project and asserted that the dam would protect Sudan from the floods it faces every year.

Egypt is still trying to make the best of the situation and to secure its share of annual water from the Nile as it awaits the negotiations with Ethiopia and Sudan. Egypt fears that its demands will not be met at a time when the country is experiencing internal unrest, ongoing since the July ouster of President Mohammed Morsi and affecting Egypt’s relations with neighboring African countries.

Ayah Aman is an Egyptian journalist for Al-Shorouk, specializing in Africa and the Nile Basin, Turkey and Iran and internal Egyptian social issues. On Twitter: @ayahaman