Ethiopia has accused Cairo of supporting anti-government protests by Oromo, which some fear could have negative repercussions on Renaissance Dam negotiations. 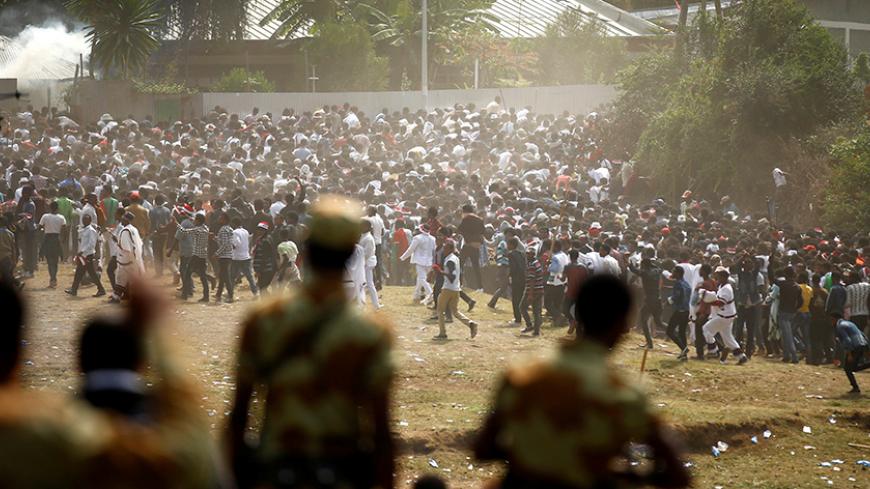 Protesters run from tear gas launched by security personnel during the Irecha, the thanksgiving festival of the Oromo people in the town of Bishoftu in the Oromia region, Ethiopia, Oct. 2, 2016. - REUTERS/Tiksa Negeri

CAIRO — At a time when Addis Ababa is facing protests and calls for equality, job opportunities and economic prosperity in the Oromia region — the largest regional state in terms of both area and population — construction at the Grand Ethiopian Renaissance Dam site continues at a quick pace. According to an Oct. 17 statement by Ethiopian Deputy Prime Minister Debretsion Gebremichael, 54% of the construction at the site is now complete.

The crackdown on protests this year in Oromia has left at least 400 people dead. Residents of the region accuse the government of taking over their land and compensating them at very low prices, before selling the land to foreign investors at extremely high prices. Locals also complain about an absence of jobs.

According to a press release issued the same day by the Egyptian Foreign Ministry responding to accusations by Addis Ababa, Hefny said that some parties seek to drive a wedge between Egypt and Ethiopia, especially after relations between the two have witnessed noticeable progress. “Egypt will always stand with Ethiopia until ultimate stability in Ethiopia is reached,” Hefny said.

On Oct. 12, the Egyptian Ministry of Foreign Affairs denied again the accusations reported by Ethiopian media that Egypt supports, trains and finances dissident and opposition groups in Ethiopia. The Ethiopian government ruled out the accusations, as it instead accused some Egyptian nongovernmental organizations of supporting opposition groups by training them on using weapons in the past years.

Ethiopia’s Communication Minister Getachew Reda said that Egypt and Eritria are directly involved in “financing, arming and training these elements,” which he described as an armed group. However, Reda left the door ajar to the possibility that the elements he accused of supporting militants were not necessarily linked to the government in Cairo, adding, “We have to be very careful not to necessarily blame one government or another. There are all kinds of elements in the Egyptian political establishment that may or may not necessarily be directly linked with the Egyptian government.”

During the educational seminar Oct. 13 at the headquarters of the armed forces, President Abdel Fattah al-Sisi said that supporting an armed opposition or plotting against Ethiopia would never happen, adding that even though Egypt has the ability to confront, it has opted for cooperation.

Noha Bakr, a professor of international relations at the American University in Cairo, warned against the consequences of being misled by Ethiopia’s accusations against Egypt. Bakr said these accusations are aimed at derailing the ongoing negotiations concerning the dam.

On Sept. 20, technical delegations from Egypt, Sudan and Ethiopia signed ultimate and official contracts for technical studies of the dam with two consulting firms: the French company BRL and the UK-based law firm Corbett & Co. The Minister of Water Resources described this incident as “historic.” At the same time, the construction of the dam raises many fears in Egypt as any potential drought could negatively affect agriculture, industry and drinking water.

In statements made to the press, Bakr said Ethiopia now has become obligated to many mutual agreements with Egypt — including the Declaration of Principles and the Khartoum Agreement — which pushes Addis Ababa to play the card of internal unrest to pressure Egypt and derail the process of negotiation.

In December 2015, Egypt, Sudan and Ethiopia signed the Khartoum Agreement, which states that they are fully obligated to the Declaration of Principles signed by the countries' presidents in March 2015. These principles regulate the cooperation of the three states to make use of the dam and the water of the eastern Nile.

UN expert on dam design and water Ahmed El Shenawi said that Ethiopia is adopting the policy of offering contradictory information in statements made by its officials such as the Ethiopian minister of irrigation, the vice president or its ambassador to Cairo. Shenawi said the ambassador had announced that the water level at the dam is 190 meters, even though the Ethiopian government in Addis Ababa said it is 145 meters.

He said that the Nile Basin countries are discussing the issue of pricing water to be sold to Egypt by the cubic meter. Shenawi said that if the dispute between Cairo and Addis Ababa escalates, the latter will resort to an international third party to solve the issue of any objection to the technical studies by the two consulting firms. “If that happens, Cairo will not have the right to make Addis Ababa commit to the recommendations of the consulting firms,” he added.

Then-Minister Tegenu said in statements relayed by the Sudan Tribune last year that the discussions leading up to the signing of the tripartite agreement in Khartoum never mentioned the storage capacity of the Renaissance Dam. He also asserted that Ethiopia could never agree on anything of that sort.