Egypt and Ethiopia are showing a willingness to resolve the dispute over the Renaissance Dam, but some fundamental concerns still remain. 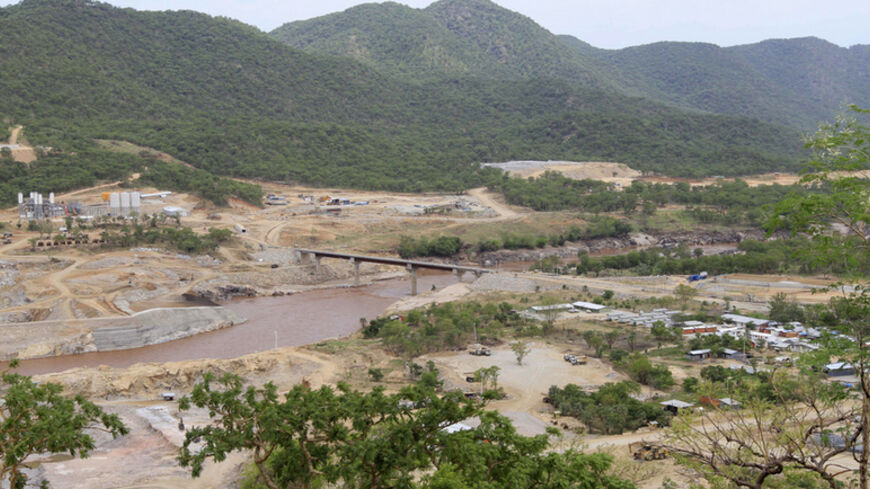 Ethiopia's Great Renaissance Dam is under construction in Guba Woreda, some 40 kilometers (25 miles) from Ethiopia's border with Sudan, June 28, 2013. -

CAIRO — In an attempt to open a new page in Egyptian-Ethiopian ties, both Cairo and Addis Ababa are trying to show their commitment and seriousness in carrying out the road map to overcome the dispute over the Renaissance Dam. The road map was agreed upon during the Khartoum talks on Aug. 25, despite Egypt’s concerns and Ethiopia’s insistence on building the dam based on the original stated specifications.

On Sept. 21, Egyptian Minister of Water Resources and Irrigation Hossam Moghazy went to Addis Ababa for the first time since the start of the dispute over the Renaissance Dam, where the Tripartite National Committee held its first meeting. The committee is made up of water experts from Egypt, Sudan and Ethiopia, and is tasked with the implementation of the road map within six months. It will then conduct studies on the impact of the Renaissance Dam on the water flow to Egypt and Sudan, as well as its environmental, economic and social effects. The studies will be conducted through an international consultancy bureau, based on the recommendations of the final report of an international panel of experts.

Although it was agreed during the Khartoum negotiations that time must not be wasted and parties must be committed to the road map for six months, ending March 1, 2015, the first meeting was held in Addis Ababa almost a month later, following a delay in setting the meeting’s date.

In an interview with Al-Monitor, an official Egyptian source who is informed about the Nile Basin issue said, “Egypt’s serious concerns persist over Ethiopia's commitment to the implementation of the new studies’ results.”

Although officials in Egypt said Cairo has overcome the trust crisis, the source said, “There isn’t any alternative for the negotiations with Ethiopia to reduce the dam’s negative impact, while Ethiopia gained time and made progress on the ground.”

The source, who spoke on condition of anonymity so as not to prejudice the negotiations, said, “A final agreement that may affect Egypt's share of the water may be reached with Ethiopia. We need to adapt to it … and to negotiate with Ethiopia ... to make up for the amount of water that is lost as it goes to the Aswan Lake.”

Government officials in Egypt viewed the latest negotiations as having led to positive steps that might be in Egypt’s interest, after the previous dialogue had reached an impasse. For the first time, Egypt received new studies on the dam and designs from Ethiopia.

After Moghazy returned from Addis Ababa, he said the visit did not and would not necessarily mean that Egypt has agreed to the building of the dam based on the current specifications. This visit proved controversial in some decision-making circles, with a fear that the visit would be misinterpreted as Egypt’s implicit approval for the construction of the dam without conditions.

Moghazy said, “We have not yet agreed upon the dam’s stated specifications and our final decision will depend on the results of studies to be conducted by an international consultancy bureau, in collaboration with the national committee of experts.”

Moghazy affirmed that, “My visit to the dam’s site was not political, but rather technical.” But the minister expressed satisfaction at the pace of construction. “I have found that construction works at the dam’s site are preliminary, ranging between 15-20%,” he said.

“Technically, the storage of water and generation of electricity are not possible in the first stage, as Ethiopia says, in September 2015.” He also said, “The topographic nature in the dam’s area does not allow the water stored behind the dam to be exploited in agriculture.”

Nevertheless, in an interview with Al-Monitor, Mahmoud Abu Zeid, head of the Arab Water Council and expert in water management, said it is not technically feasible to judge the dam’s details from one quick visit by a minister.

“It would have been better to put off the minister's visit to Ethiopia and the dam’s site until the national committee completed its work and until we made sure that Ethiopia will be committed to the results of the studies on the dam’s impact on Egypt’s water interests,” he said.

Abu Zeid, who was a former minister of water resources and irrigation and took part in long negotiations with the Nile headwater countries, said, “A positive development in the Egyptian-Ethiopian negotiations may take place to resolve the dam’s issue and its negative effects. Yet, they are moving slowly and the waste of additional time will not be to Egypt's advantage.”

Another technical source, an Egyptian official involved in the Nile Basin issue, said, “There are periodic communications with partners and international organizations concerned with the Nile waters to keep them informed of the dam issue.” He added, “Cairo is thinking of asking the European Union to nominate an international expert to evaluate the studies on the impacts of the dam on Egypt’s water security.”

Several signs confirm that the dispute over the water resources in the Nile Basin persists. The debate and negotiations on the Renaissance Dam are not over yet. Ethiopia has officially announced the establishment of a new dam without giving Cairo prior notice. This has sparked new concerns about Ethiopian dam plans, which have become an African demand to meet growing needs in terms of development and energy saving.