Differences still abound between Egypt and Ethiopia over the construction of the Grand Ethiopian Renaissance Dam, which Cairo says could jeopardize its water resources. 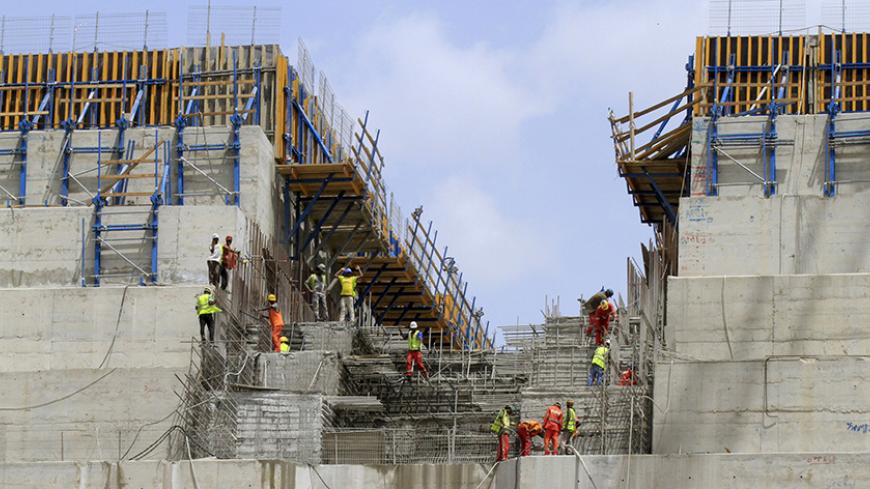 CAIRO — Studies analyzing the effects of the proposed Grand Ethiopian Renaissance Dam were due six months ago, but the parties involved have yet to agree on how consultants should even approach the studies.

Persisting differences among Egypt, Ethiopia and Sudan keep delaying the studies, which Egypt hopes will prove that the dam's construction will cause extensive problems for Egypt and Sudan. The differences revolve around details in the fine print of the offers submitted by the two consultant offices chosen to conduct the studies: the French BRL and the Dutch Deltares. The seventh round of negotiations ended July 22 in Khartoum without any signed contracts, however.

Alaa Yassin, spokesman for an Egyptian delegation of experts on the Renaissance Dam, said in an interview with Al-Monitor, “Our official position is that this dam is harmful to Egypt, and its storage capacity has no technical or economic justification. The differences remain unresolved, and a great deal of time has been consumed. We were supposed to finish the studies in no more than six months, but around a year has passed without signing the contract related to the consultants that will conduct the studies.”

The Egyptian delegation, along with representatives of Sudan and Ethiopia, make up the international commission of experts on the dam.

From September 2014 until March 2015, the three countries managed only to select the two consultant offices, but never signed any official contract with them. Members of the experts committee cannot agree on the proposals submitted. The resulting delay prompted political leaders in the three countries — Egyptian President Abdel Fattah al-Sisi, Sudanese President Omar Bashir and Ethiopian Prime Minister Hailemariam Desalegn — to sign an agreement in March 2015 in which principles were defined in the hope of resolving their differences.

The disagreements also revolve around the office’s country of origin, as there was a Sudanese-Egyptian desire to exclude any consultancy from the United States. While Ethiopia proposed to select BRL, Egypt was leaning toward Deltares. Even after agreeing to hire both French and Dutch consultants, disputes over the division of tasks between the two intensified. While Ethiopia insisted that the French company be the main contractor and the Dutch the subcontractor, Egypt did not agree and insisted that the Dutch office take part in the process, with specific tasks.

In light of these ongoing disputes that threaten the completion of joint studies, the Egyptian government announced it had conducted and submitted to both Ethiopia and Sudan at a July 22 Khartoum meeting two studies on the effects of the dam. One of the two studies underlines the effect of the dam on Egypt with respect to its water share as well as its production of hydroelectric power generated by the High Dam. The second study addresses the flow of the lower water gates, which secure the water needs of downstream countries (Egypt and Sudan), especially when the Renaissance Dam’s turbines stop.

He added, “There are interests that prompt each party to cling to [its] position, but the Egyptian negotiator did not and will not pass any resolution that would harm Egyptians’ water rights, as the country is already suffering from water shortage."

However, Sudanese Minister of Water Resources and Electricity Motaz Moussa pointed out in a press statement on the sidelines of the Khartoum meetings that the Egyptian studies are nonbinding.

Egypt is concerned about the preliminary storage capacity of the Renaissance Dam, which Ethiopia decided to increase from 14 billion cubic meters to 74 billion cubic meters. The beginning of the water storage process could potentially lead to a decrease in Egypt's share of water at a rate ranging from 9 billion to 12 billion cubic meters per year. Egypt would lose about 3 million acres of agricultural land and 5 million to 6 million farmers would be displaced. Added to that is concern about the deficit in the energy production from the High Dam and the decrease in the Nasser Lake level to about 15 meters.

What is more, the project could lead to periods of drought, deterioration of the water quality and a possible dam collapse as a result of its construction on a downhill area that sees the strong flow of the Blue Nile waters at more than a half-billion cubic meters of water per day. These waters come from highlands that reach up to 2,000 meters, and this could cause severe flooding that could wipe out some of villages and cities, particularly in Sudan.

Egyptian Minister of Water Resources and Irrigation Hossam Moghazi said at a July 29 news conference attended by Al-Monitor in Cairo that differences concerning the scope of the work of the French and Dutch consultants have been resolved: The French firm will take care of 70% of the tasks, while the Dutch company will take care of 30%.

Moghazi added, “The offer submitted by the BRL will be reviewed once amended at a meeting of the tripartite committee experts set to take place Aug. 12 in Addis Ababa. If the commission's experts approve it, it will be presented to the water ministers of the three countries for signing at a meeting to be held in Ethiopia Aug. 20.”

However, if the committee’s experts find that substantial amendments were made and need to be further studied by the three countries, then the signing will be postponed until a meeting to be held in Cairo in September.

Egyptians are waiting for the Aug. 20 meeting, which will determine if the Egyptian-Ethiopian disputes might end, and whether contracts will be signed or negotiations will return to square one.