Egypt, Ethiopia and Sudan — embroiled in a dispute over Ethiopia's Renaissance Dam project — agree on hiring a new consulting company, but not much else. 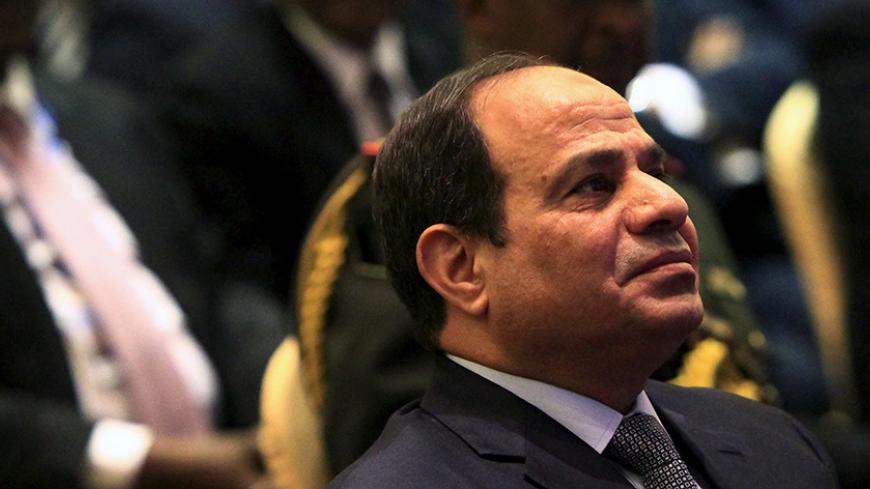 KHARTOUM, Sudan — Participants kicked up plenty of dust at the most recent round of negotiations concerning the Grand Ethiopian Renaissance Dam, but once again departed with only an agreement to keep trying to reach an agreement.

The negotiations among officials of Egypt, Ethiopia and Sudan were marked by direct confrontations and escalating tension. Potential solutions are murky, at best, and the process remains stagnant.

On Dec. 27, the negotiating parties found themselves forced to announce that they had signed a document calling for “continued” cooperation and trust-building in an attempt to contain mounting public pressure in Egypt and Ethiopia. Yet the parties failed to find a solution that preserves the Nile water interests of Cairo and Addis Ababa.

The negotiations resumed in Khartoum just two weeks after the first round held in the first week of December. However, Egypt remained skeptical, especially after Ethiopia announced Dec. 26 — just hours before the start of negotiations — that it was diverting the Nile’s course to run through the dam for the first time. This step confirmed Addis Ababa’s refusal to delay construction on the dam until the end of the negotiations.

The filling of the dam's reservoir and its operating mechanisms topped the negotiations’ agenda, but Egypt and Ethiopia’s divergent visions and intransigent positions hindered any potential agreement.

During the first hours of the meetings, the decision was finally made to restart the technical studies on the dam’s impact — a topic of dispute for 18 months now, after the withdrawal of the Dutch consulting institute Deltares. Officials agreed to use the French design and engineering consulting company Artelia Group to carry out 30% of the studies with BRL, another French consulting group, provided the studies are officially started by the beginning of February.

Egypt and Ethiopia were both satisfied with Artelia, which has provided its services in major projects in the two countries. It has a permanent office in Egypt and participated in the studies and technical and economic assessment of the GIBE III 1.870 MW hydropower project in Ethiopia. It provided engineering and technical consulting services for hydroelectric projects such as the Ethiopian Assiut Barrage in 2009, in addition to irrigation and water treatment projects such as the rehabilitation of the Nubaria and Ismailia canals from 2010 to 2013 in the Nile Delta.

An Egyptian official familiar with the negotiations told Al-Monitor on condition of anonymity, “We are still facing a great dilemma, since Ethiopia is insisting on continuing construction of the dam without taking any political pledge to comply with the studies’ recommendations, which may be difficult to implement after the dam is complete and operating.

The foreign ministers of all three countries signed a document after the meeting at an upbeat press conference, attended by Al-Monitor, aimed at calming the charged atmosphere that prevailed over the meetings. The agreement’s three major articles, however, add little new to the Declaration of Principles signed by the three presidents in March.

These articles are the approval of Artelia, a commitment to speed up completion of the studies recommended by the International Panel of Experts on the dam in May 2013 and continued compliance by the three negotiating states with the policies of good faith and trust in accordance with the terms of the Declaration of Principles.

It should be noted that, during the December meeting, Egypt submitted a technical proposal to increase the number of lower water gates to secure a daily flow in the event of any malfunction or maintenance of the main gates or the associated tunnels.

Yet after the first technical meeting between experts from the three countries, held Jan. 7-8 in Addis Ababa, Ethiopia officially rejected the proposal. Bizuneh Tolcha, public relations director at the Ethiopian Ministry of Water, Irrigation and Electricity, said no changes would be made to the plan’s design and two water outlets would provide a suitable water flow to Egypt and Sudan.

Asrat Birhanu, an Ethiopian electrical power expert, told Al-Monitor, “The diversion of the river into its natural course and the water flowing inside it means that the dam is now ready for initial filling of a storage of nearly 4 billion cubic meters in the near future.”

He added, “This procedure does not affect the water flowing to Egypt and Sudan, which will not be reduced during the completion of the construction of the dam.”

Regarding Egypt’s request to increase the number of water gates in the dam, Birhanu said, “Ethiopia already conducted a hydraulic simulation model to simulate the quantities of water flowing to Egypt and Sudan, [which showed there would not be] significant damage during the filling of the reservoir designed with a capacity of 72 billion cubic meters and estimated to be filled in a period ranging from three to five years.”

He explained that “according to the initial design, sufficient water quantities pass through the dam’s water gates to Egypt and Sudan during the initial filling period as of the start of July 2016 of a storage capacity of 4 billion cubic meters.”

“Fulfilling Egypt's request to increase the number of the dam’s gates to four will not have a special economic benefit, especially since these gates will not be used during the operation of the dam,” he added.

The meetings stirred objections among the Egyptian and Ethiopian public in the absence of a reassuring categorical solution. Egyptians have become concerned about the dam’s impact on Egypt's annual quota of Nile water, while Ethiopian public opinion has been influenced for the four past years by a political campaign stressing the need to complete the dam project, which has become Ethiopia’s No. 1 development dream.

In a Dec. 30 speech, President Abdel Fattah al-Sisi talked about the Egyptian concerns. “I share with you this concern,” he said. “But rest assured … I have never deceived you.”