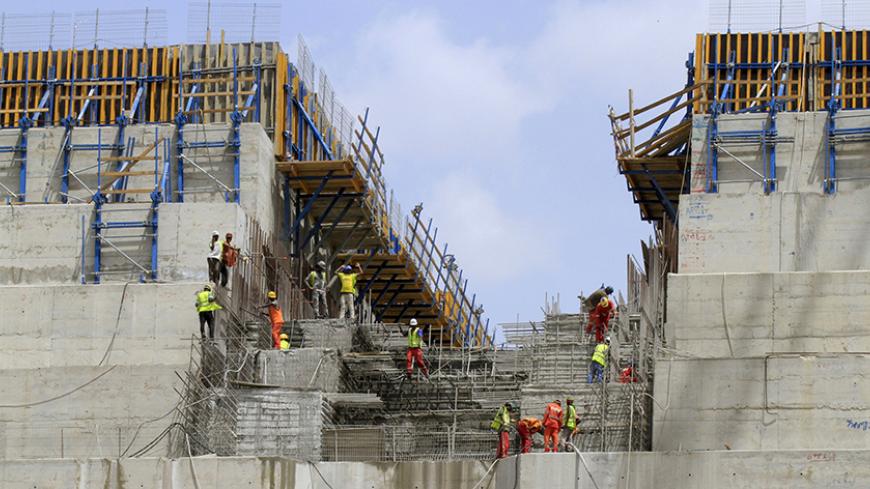 Construction workers are seen in a section of Ethiopia's Grand Renaissance Dam during a media tour along the Nile in Benishangul Gumuz Region, Guba Woreda, Ethiopia, March 31, 2015. - REUTER/Tiksa Negeri

CAIRO — Satellite images taken July 10 and showing around 200 million cubic meters (almost 53 billion gallons) of water pooled at the Grand Ethiopian Renaissance Dam (GERD) reservoir site have sparked controversy in Egypt amid fears that Ethiopia has started filling the reservoir. The Egyptian government, however, says the pooling water is due to construction and the 2017 seasonal Nile flooding.

On July 12, the Egyptian government stated that the water pools have no impact on Egypt's water quota. On the same day, Haytham Awad, the former head of the Irrigation Engineering and Hydraulics Department at Alexandria University, told Egyptian news outlets, “After analyzing the newly acquired satellite images of the Renaissance Dam reservoir site, it appears that a small new lake is being formed over a surface around 16 square kilometers [10 square miles].”

Awad told Al-Monitor that this quantity of water could be the beginning of a water-storage process or could be gone by the end of the flooding. If the former is true, “The filling by Addis Ababa of the Renaissance Dam before the end of the neutral technical studies conducted by international consultancy firms would constitute a breach of Article V of the Agreement on the Declaration of Principles on the [GERD project] signed between Egypt, Sudan and Ethiopia,” he said.

He noted, “The pooled water does not represent more than 1% of the Renaissance Dam’s lake [capacity] after completion of the dam. This lake will have a surface area of 1,680 square kilometers [1,044 square miles], and the reservoir would contain 74 billion cubic meters [19.5 trillion gallons] of water.”

He said the quantity of the pool can be discharged in less than one day into the Blue Nile.

Egypt’s Ministry of Water Resources and Irrigation spokesman Hossam Imam told Al-Monitor, “Ethiopia is not filling the dam lake. The quantity of stored water will shrink when the Nile flood season ends in Ethiopia’s highlands.” Imam stressed that the water is pooling for the first time around the dam due to the large amount of construction work and because the water quantities flowing to the Blue Nile have exceeded those currently discharged from the dam’s tunnels.

The anxiety comes in the context of stumbling technical negotiations between Egypt, Sudan and Ethiopia led by the National Tripartite Committee, composed of 12 experts from the three countries.

The French consultancy firms hired to conduct impact studies of the dam on Egypt and Sudan submitted an introductory technical report earlier this year, to diverging opinions among the three concerned states.

Cairo had expressed fear that the studies would never be completed. Egyptian Foreign Minister Sameh Shoukry had told his Ethiopian counterpart, Workneh Gebeyehu, in a July 1 meeting on the sidelines of the African Union preparatory meetings in Addis Ababa that Egypt would be the most affected by the construction of the GERD if its concerns are not taken into consideration.

In a July 1 statement, Egyptian Foreign Ministry spokesman Ahmed Abu Zeid said, “Shoukry assured his Ethiopian counterpart that the Declaration of Principles signed between Egypt, Ethiopia and Sudan clearly confirms the necessity of abiding by the results of the studies on the possible impacts of the dam on the two downstream states.”

Abu Zeid also said Shoukry told Gebeyehu, “Losing more time without conducting such studies at their specified dates would bring the three countries major challenges,” and that “political intervention would be necessary to put things in order to maintain ongoing technical cooperation.”

Shoukry also repeated the request of the Egyptian Water Resources and Irrigation Ministry to his Ethiopian and Sudanese counterparts to hold an urgent ministerial meeting concerning the Tripartite Committee. The committee needs to issue instructions for moving forward on the introductory technical report, which it has yet to accept.

Abu Zeid further indicated that the Ethiopian foreign minister affirmed his country is committed to cooperating with Egypt to complete the tripartite technical negotiations and to finalize the studies on time, stressing Addis Ababa’s commitment to the 2015 Declaration of Principles.

Mona Omar, who was the assistant of the former Egyptian foreign minister for Africa and is currently the director of the African Center at the British University in Egypt, told Al-Monitor, “There are no negotiations at the moment about the Renaissance Dam. The three countries are awaiting the impact assessment studies conducted by international consultancy firms. An introductory report by those firms was submitted a long time ago and has yet to be discussed, prompting Cairo to call for an urgent meeting of water ministers in Ethiopia, Sudan and Egypt.”

Commenting on Ethiopia’s pledge not to fill the dam before the technical studies are complete, Ahmed Mufti, a Sudanese expert on international law who resigned from the first GERD international panel of experts formed in 2011 told Al-Monitor the outcomes of the studies are not binding for Ethiopia, according to the Declaration of Principles. “There is no specific obligation for Ethiopia when it comes to the first filling of the dam,” he said.

He confirmed that the National Tripartite Committee was expected to decide on three topics: the rules regulating the first filling of the dam, the annual operational rules and how to deal with the negative impacts. “This committee has been around for four years and has yet to agree on any of those issues. This requires searching for an alternative for the technical committee negotiations,” he added.

The Declaration of Principles signed between Egypt, Sudan and Ethiopia in March 2015 set a period of 15 months as of the start of the two studies recommended by the international panel of experts to complete the impact assessment studies on Egypt and Sudan.

The consultancy firms have yet to finish their studies. Their contracts ended in September and they had agreed to submit final reports within 11 months, but because of disagreements among the various parties involved, a timely conclusion appears unlikely.