Egypt has accused Ethiopia of resisting making any of the concessions needed to reach an agreement on Addis Ababa's controversial dam on the Blue Nile. 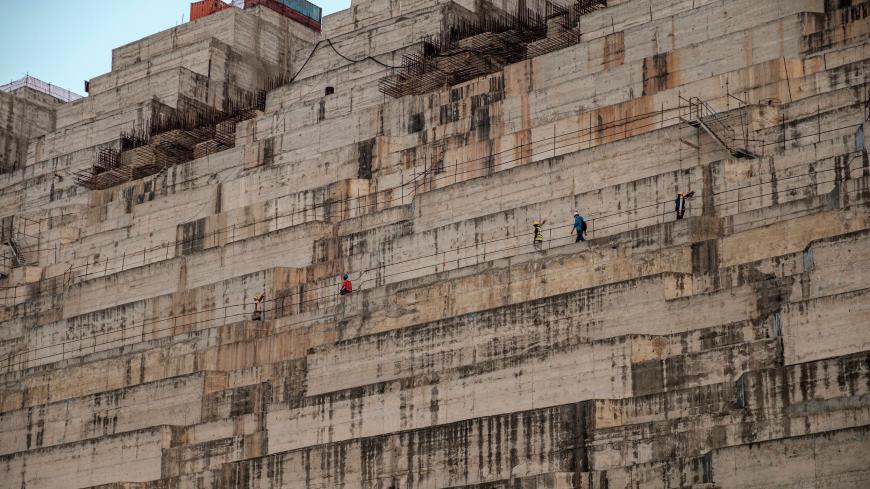 Workers walk along the Grand Ethiopian Renaissance Dam near Guba in Ethiopia, on Dec. 26, 2019. - EDUARDO SOTERAS/AFP via Getty Images

Amid conflicting reports over the filling of the reservoir of Ethiopia’s mega dam on the Nile River, tensions continue to escalate between Cairo and Addis Ababa.

Minister of Irrigation Seleshi Bekele announced July 15 that Ethiopia had started filling the Grand Ethiopian Renaissance Dam (GERD) without reaching an agreement with Egypt and Sudan on the controversial project addressing concerns of its impact on the two countries' water supply.

In statements reported by Ethiopian state television, Bekele said that the initial storage process, estimated to fill reach 4.9 billion cubic meters, had begun. The reported start of the filling of the GERD came after the July 13 conclusion of 10 days of tripartite negotiations on the dam under the auspices of the African Union and in the presence of international observers.

However, hours later Bekele’s office denied the news, with state television apologizing for “misinterpreting” the minister’s statements. The conflicting reports came after images circulated online showing rising water levels in the reservoir. The Ethiopian side later attributed the increase to recent rains.

Egypt blamed Ethiopia for the failed talks. Foreign Minister Sameh Shoukry said in televised comments July 13 that the Ethiopians had not shown any desire to reach an agreement on the dam.

During the talks, two meetings were held in parallel for technical and legal teams from the three countries to find common ground on the dam.

The ministry said that during the technical meetings, Egypt put forward some alternatives for dealing with water scarcity during both the filling and the operation of the dam. Meanwhile, the Ethiopian side suggested postponing decisions on the points of contention during the last round of talks, to be referred to a technical committee to be later formed to monitor the implementation of the agreement.

Egypt squarely rejected the idea, arguing that it is not possible to delay addressing technical issues of great concern to Egypt for the committee to review until after the signing of the agreement.

The Ethiopian Ministry of Irrigation expressed its position on the meetings' failure with a complaint: “The unchanging and additional demands from Egypt and Sudan prevented reaching an agreement.”

On July 14, Sudan submitted its final report on the tripartite talks to the AU, including Sudan’s assessment of the meetings and propositions to solve the issues and outlining the progress made.

The main points of dispute revolve around the operation and filling of the dam during periods of drought. Ethiopia proposed filling the reservoir of 74 billion cubic meters during a period of four to seven years, while Egypt demanded the reservoir be filled over a period of 10 years with a legal agreement ensuring that the other dams won't be affected and manages the water flow during times of drought.

Alaa Zawahiri, a professor of engineering at Cairo University and a member of Egypt's technical committee for the GERD negotiations, said that in the last round of talks, Ethiopia backtracked on accepting the rules for filling and operating the dam. Zawahiri told Al-Monitor over the phone that there has been some rapprochement between Cairo and Khartoum, explaining that Sudan and Ethiopia made compromises on some technical points though they were rejected by the Egyptian negotiators.

Khartoum has concerns about the dam’s safety and impact on the Sudanese water supply.

Zawahiri said, “The Egyptian negotiating team explained all the technical and legal aspects and Egypt’s consistent demands to international observers. It also conveyed Egypt’s concerns in full. The Egyptian negotiators have several principles that cannot be waived. The talks discussed the quantities of water discharge from the dam during the periods of drought and flood. They did not touch on Egypt’s water share.”

Zawahiri added that Addis Ababa had been wasting negotiation opportunities by focusing on the points of dispute and Egypt’s domination of the Nile waters.

Hani Raslan, an analyst at Al-Ahram Center for Political and Strategic Studies, finds the last round of negotiations not promising at all.

He told Al-Monitor that Egypt would turn again to the UN Security Council as Ethiopia is rejecting all of Egypt's offered concessions. Raslan explained that talks at the level of experts, observers and water ministers have failed and now the time has come for the state leaders to step in.