Addis Ababa rejoices over GERD progress as talks drag on

Ethiopia is celebrating its progress on filling the Grand Ethiopian Renaissance Dam, no experts are expressing hope for a binding agreement to emerge from the latest round of tripartite talks. 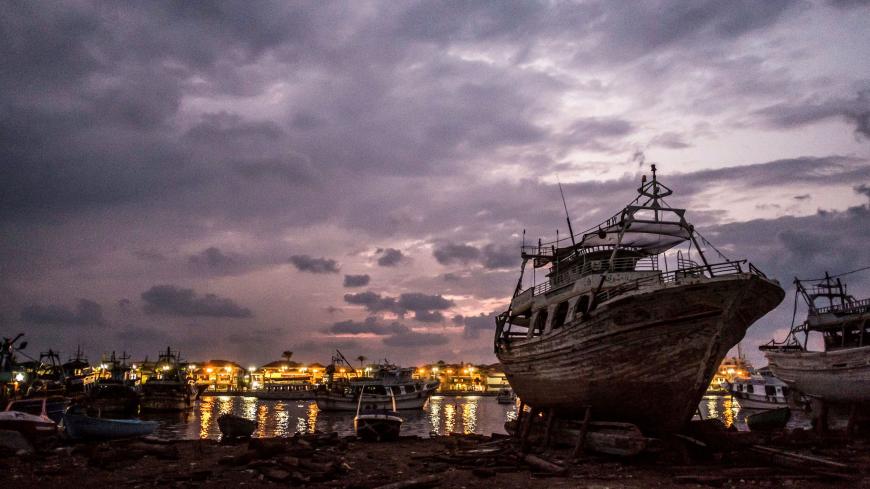 In this file photo taken on Oct. 22, 2019, boats are pictured along the riverbank and off the water of the Nile River delta's Damietta branch near the estuary into the Mediterranean Sea, in the town of Ezbel al-Borg in Egypt's northern governorate of Damietta. - KHALED DESOUKI/AFP via Getty Images

CAIRO — Following a week of local consultations, the technical and legal negotiating committees in Egypt, Sudan and Ethiopia resumed a second round of discussions Aug. 3 to reach a comprehensive and binding agreement governing the filling and operation of the Grand Ethiopian Renaissance Dam under the auspices of the African Union.

The fresh round of talks comes after Ethiopia unilaterally began to fill the dam's reservoir with about 5 billion cubic meters of water without reaching agreement with downstream countries Egypt and Sudan.

The presidents of Egypt, Sudan and Ethiopia agreed during the mini-AU summit held July 21 to return to negotiations. The second round of negotiations kicked off under the auspices of the African Union on July 27, but the delegations of Egypt and Sudan have expressed great reservations toward Ethiopia's move to begin filling the reservoir and Ethiopian Foreign Ministry spokesperson Dina Mufti had said at a July 24 press conference that his country “is not seeking a binding agreement but a guiding agreement that can be modified as needed.”

The Sudanese Ministry of Water said in a July 27 press statement that the Ethiopian move is “a harmful and worrying precedent” and the Egyptian Ministry of Water said in its own statement the same day, “The unilateral filling carried out by Ethiopia raised a panoply of questions about the ability of the negotiation process to reach a fair, balanced and binding agreement to fill and operate the dam.”

During the July 27 summit, the Egyptian and Sudanese delegations held firm on the need to reach a binding and comprehensive agreement that governs the filling and operation of the Renaissance Dam.

Ethiopian Minister of Foreign Affairs Gedu Andargachew celebrated his country’s successful completion of the first stage of filling, tweeting July 22, “Congratulations! It was the Nile River, and the river became a lake. Water will no longer flow much into the river but into the lake. … The Nile is ours.”

Meanwhile, the Ethiopian Embassy in Cairo hosted a July 23 celebration of the progress on the dam, coinciding with Revolution Day in Egypt.

Commenting on the Ethiopian statements in a televised statement, a spokesperson for the Ministry of Water Resources and Irrigation deemed them “provocative and inconsistent with international law.”

President Abdel Fattah al-Sisi told reporters July 28, “The Egyptians’ concern is legitimate and based on a just cause.” Addressed his countrymen, he said, “You have the right to be concerned, but we are fighting a battle may be prolonged.” He criticized some media outlets for suggesting that Egypt might resort to military action against Ethiopia, ruling out the possibility.

After the first session of the second round of AU-sponsored discussions under the supervision of the World Bank, the European Union and the United States, an Egyptian delegation official told Al-Monitor on condition of anonymity, “There is Egyptian-Sudanese coordination to focus on a specific agenda during this round of talks and the AU coordinators were informed not to allow any party invoke issues that hinder the conduct of negotiations and divert them from the primary goal of reaching a balanced and fair agreement on the filling and operation of the GERD.”

The official added, “Each country’s technical and legal positions and opinions have become clear regarding the contentious points, namely the filling and operation of the dam in years of drought … at the technical level, and at the legal level by the binding character of the agreement.”

He stressed the need for “experts and observers to every opportunity to bridge points of view and resolve outstanding issues.”

Allam said, “Sisi's recent statements confirm that the Egyptian state does not want to reciprocate the provocative policies adopted by Ethiopia,” adding, “If the AU fails to resolve the controversy during the current round of talks, then Egypt and Sudan would have to withdraw from any new round of negotiations with Ethiopia.”

Tariq Fahmy, a professor of political science at Cairo University, told Al-Monitor, “It has become widely known in Egypt that Ethiopia's statements are directed at its own public and come in response to the pressures on the Ethiopian administration.”

However, he added, “Ethiopia's behavior and procrastination [on] signing an agreement calls for intervention by international parties, especially donor institutions that have tools to discourage a country from causing great harm to others.”

Fahmy went on, “The Ethiopian negotiation policies have been condemned by most of those familiar with the Nile water issue at the regional and international levels.”

Hani Raslan, an analyst at Al-Ahram Center for Political and Strategic Studies, told Al-Monitor, “The Egyptian administration bears responsibility for preserving the historical and fateful rights of the Egyptian people.”

He went on, “The efforts by Ethiopia to dominate the Nile River [threaten to effect a historic shift] and if Cairo does not find a way to protect its rights in the Nile waters, this shift could permanently change the balance of power in favor of Ethiopia,” he added.

Raslan continued, “After Ethiopia’s unilateral filling of the GERD lake passed without any problems, the ongoing negotiations are not expected to lead to any balanced and binding agreement.”