During the closed negotiations held in Khartoum, Egypt, Sudan and Ethiopia agreed on a plan to find technical solutions to the Ethiopian Renaissance Dam, which Egypt fears threatens its share of the Nile. 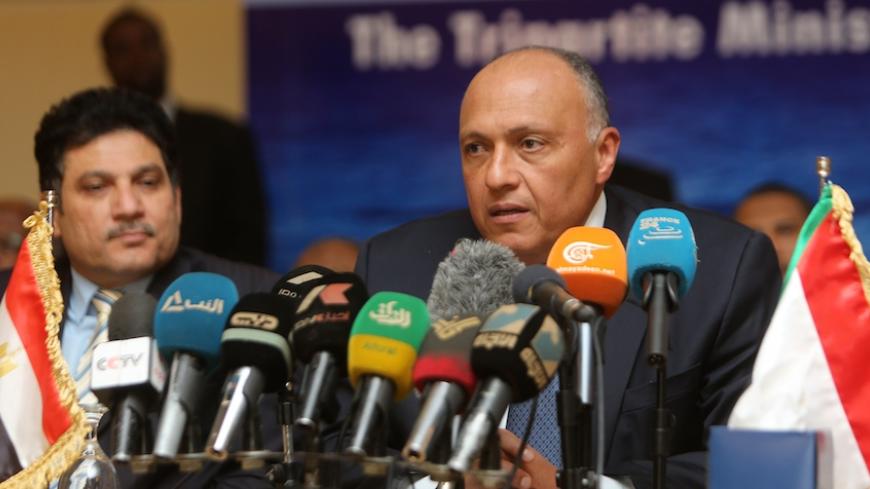 Egypt's Foreign Minister Sameh Shoukry speaks during a press conference with his Sudanese and Ethiopian counterparts in the Sudanese capital of Khartoum, March 6, 2015. - ASHRAF SHAZLY/AFP/Getty Images

CAIRO — When the late Ethiopian Prime Minister Meles Zenawi laid the foundation stone of the Grand Ethiopian Renaissance Dam (GERD) in April 2011 in the wake of the January 25 Revolution, he marked the beginning of a long standoff between Cairo and Addis Ababa and much instability and chaos in Egypt. The conflicting parties decided in 2014 to return to the negotiating table in a bid to overcome their differences and disagreement about the risks the GERD poses to Egypt’s water security. The first Malabo meeting, which took place in August 2014, addressed the technical aspects of the issue.

On March 3, the foreign and water ministers of the Eastern Nile countries of Egypt, Sudan and Ethiopia held three days of closed negotiations in the Sudanese capital of Khartoum. The three countries reached a preliminary consensus on a trilateral political and technical agreement on water use in the Eastern Nile basin and the risks from the GERD. The plan's contribution to ending the conflict on the Nile waters is uncertain, as many issues remain, such as the dam's negative impact on Egypt.

Following the talks, Egypt’s Minister of Water Resources and Irrigation Hossam Maghazi said in a March 6 press statement, “The document relates to Egypt’s and Sudan’s concerns regarding the Ethiopian Renaissance Dam. The document is seen as a positive step forward, which will be followed by other steps once it is referred to the presidents of Egypt, Sudan and Ethiopia for review and ratification.

Meanwhile, the representatives in the negotiations refused to disclose to the media any details about the agreement until it is submitted to the presidents.

Egypt is changing its policy regarding the GERD issue, toning down its rhetoric on the international level and heading toward reconciliation and dialogue with Ethiopia. It seeks to appease fears about the dam’s impact on Egypt’s annual share of the Nile River, estimated at 55.5 billion cubic meters under the 1959 agreement for the utilization of the Nile waters. Yet, Egypt's concerns continue about finding a diplomatic solution to preclude any risks resulting from the dam without conflicting with Ethiopia’s plans to complete its construction.

Egyptian President Abdel Fattah al-Sisi met with Ethiopian Prime Minister Hailemariam Desalegn for the first time on June 26, 2014, on the sidelines of the African Union summit in Equatorial Guinea.

The Malabo declaration was subsequently issued and included seven items providing for water management in the eastern Nile basin between Cairo and Addis Ababa, and defining the relations between the two countries in regard to the utilization of the Nile waters.

During the 2014 meeting, a political and a technical approach were agreed upon to resolve the outstanding problems from the dam, mainly the dam’s negative impact on water flow into the Aswan High Dam, its negative environmental impact and the energy generated by the dam.

According to a well-informed source who spoke to Al-Monitor on condition of anonymity, "It was necessary to push forward negotiations on the political level, as the results of technical meetings have yet to be implemented."

The source added, "Although negotiations have been productive yet difficult, we are still waiting to see the results of the document that was agreed upon in Khartoum. It included for the first time items dealing with Ethiopia’s policies to fill the storage reservoir attached to the dam lake and operational mechanisms to this effect.”

Egyptian officials attach great significance to issues relating to the "storage lake" and the dam's operational mechanisms. A tripartite technical committee was formed following the Khartoum negotiations held in August 2014 to resolve outstanding technical issues concerning GERD’s risks on Egypt and Sudan’s water security, based on a six-month road map. However, the committee has yet to make technical recommendations on the subject.

Another source involved in the work of the tripartite technical committee told Al-Monitor on condition of anonymity, "For the moment, the committee is only concerned with selecting an international consulting firm to study the dam’s environmental hydraulic and economic effects on Egypt and Sudan, without considering the operation policies or issues relating to the dam’s size and capacity."

While Ethiopian officials continue to emphasize that the dam is an Ethiopian national project and that Ethiopia is not seeking to start a partnership with Egypt, Desalegn said in a press statement in Khartoum at the conclusion of the talks, "The document is a step to take the tripartite partnership to higher levels.”

Adel Nabhan, a researcher in the Nile Basin file, told Al-Monitor, "The negotiations have once again demonstrated Egypt’s failure in managing this issue. The Egyptian government failed to reach a quick solution as the construction work is ongoing at the dam, while the Ethiopian administration did not agree to suspend them temporarily until studies and reports produce final results on the dam’s effects on both countries.”

He added, “If the recent agreement truly included special provisions on the dam's operation policies and filling the storage reservoir, this means that Egypt agreed to its completion without considering its potential risks.”

Meanwhile, the former head of the Nile Water Department at Egypt's Ministry of Water Resources and Irrigation, Mohammed Abdel Aty, told Al-Monitor, “The [semi-formal] preliminary document, which was drafted according to international standards and agreed upon by the ministers of foreign affairs and agriculture, is the best way to settle the dispute, especially in light of the slow process to find technical solutions to this effect.”

Abdel Aty added, “A genuine agreement akin to the 1959 agreement between Cairo and Khartoum could be reached, should there be a true, strong political will. However, things are now standing at the level of a memorandum of understanding or a letter of intent.”

Following the negotiations in Khartoum, the issue was referred to the presidents of Egypt, Sudan and Ethiopia for review and ratification. However, the three countries have no other choice but to cooperate, as the dam has now become a reality.