Despite dam dispute, Egypt seeks to build trust with Ethiopia

In an interview with Al-Monitor, Egyptian Water Minister Hossam Moghazi addresses the ongoing dispute with Ethiopia over the Renaissance Dam. 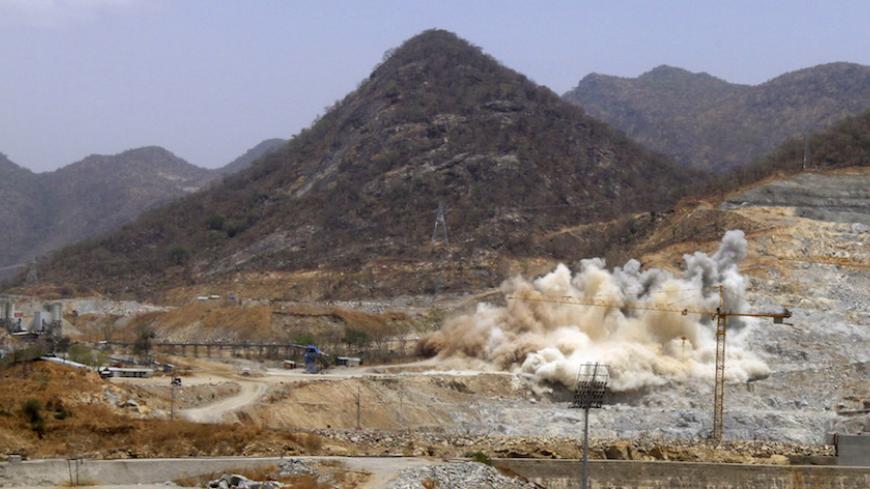 A cloud of dust rises from a dynamite blast, as part of construction work at Ethiopia's Grand Renaissance Dam, during a media tour along the river Nile in Benishangul Gumuz Region, Guba Woreda, in Ethiopia, March 31, 2015. - REUTER/Tiksa Negeri

CAIRO — After water ministers from Egypt, Sudan and Ethiopia failed to reach a technical agreement to reduce the risk posed by the Grand Ethiopian Renaissance Dam and negotiations were upgraded to the political level between foreign affairs ministers, Egyptian Minister of Water Resources and Irrigation Hossam Moghazi told Al-Monitor, “Cairo is totally committed politically to building trust with Ethiopia. However, it will not relinquish any of its historical and vested rights to the Nile waters.”

Speaking to Al-Monitor in Cairo following his return from a three-country meeting held in Khartoum earlier this month, Moghazi spoke about the government’s opinion on the efficiency of the negotiations with Ethiopia following the calls that opposed the continuation of negotiations, and considered them a waste of time. Meanwhile, construction is ongoing at the dam site, with Addis Ababa not waiting for the outcomes of the negotiations and technical studies that would define how to reduce the risks for Egypt.

The technical negotiations between Cairo, Addis Ababa and Khartoum started in August 2014, after President Abdel Fattah al-Sisi assumed office and signed with Ethiopia a cooperation memorandum on the management of the Nile waters, which is known as the Malabo declaration, in June 2014. Although the negotiations continued for more than a year and a half, a technical agreement was not reached on how to conduct studies that would define how to deal with the dam’s negative effects.

Al-Monitor:  There are demands among the Egyptian public that negotiations with Ethiopia over the dam be halted, after the previous rounds failed to reach an agreement. How do you view the importance and usefulness of the negotiations?

Moghazi:  We upgraded the negotiations with Ethiopia and Sudan to the political level, in the presence of the water resources and foreign affairs ministers, particularly since the negotiations had been very slow while construction works were accelerated at the dam site, and technical studies did not start as required.

I believe that we reached the goal from attending the ... [three-country] meeting in Khartoum, since the Egyptian concerns were expressed to the Ethiopian side, which, for its part, asked for a period of two weeks to respond. We have also tried to push forward the technical aspects, and the three countries agreed to discuss a new vision for the completion of the studies, which Egypt is expected to present, considering it is the party in charge of the current round of the tripartite technical meetings.

Al-Monitor:  There is talk that Cairo has conditioned the continuation of the negotiations on a mechanism guaranteeing Egyptian participation in the management, operation and filling of the dam’s reservoir. Do you expect Ethiopia to agree to these demands?

Moghazi:  This matter is specified by the Agreement on the Declaration of Principles, which was signed by the three countries’ presidents in March 2015. It stipulates that the water resources ministers of [Egypt, Ethiopia and Sudan] develop a plan for the dam’s operation mechanism after the implementation of the technical studies. Once the technical studies are completed, this article is supposed to be activated to agree on the dam operation mechanism, in a way that does not harm the downstream countries.

The participation in the operation and management does not mean that Egyptian technicians should be permanently present at the dam site. A particular vision will be developed for this mechanism, after the negotiations are completed.

Al-Monitor:  Have the outcomes of the negotiations with Ethiopia been accepted by the Egyptian political administration, despite the 18-month delay in the implementation of the road map and the increased popular objection to the negotiations’ path?

Moghazi:  We have submitted a report on what has been discussed and on the outcomes of the latest ... [three-country] meeting to the political leadership. However, it has yet to be discussed and the responses have not arrived. Nevertheless, before the next meeting is held, we still have time to conduct internal consultations on the meeting’s outcomes and what will be completed in the coming negotiations.

Al-Monitor:  Do you have any technical alternatives in case the negotiations fail and in case Ethiopia rejects the Egyptian demands and offers?

I would like to stress that trust-building, which was achieved over the last year and a half, is the reason behind the continuation of honest and transparent negotiations between the three countries. Had this trust not been available, we would not have had the opportunity to put forward our concerns regarding the dam. The negotiations are a direct means of contact between the three countries. We have a total political commitment to build trust with the Ethiopian side. Yet, it does not mean giving up any of [our] historical and vested rights to the Nile waters.

Al-Monitor:  Since the announcement of the Renaissance Dam, Sudan’s positions began to shift and it has generally supported Ethiopia, despite the similarities in Egyptian and Sudanese positions on all issues related to water management in the Nile River Basin since the signing of the 1959 agreement and the establishment of the High Dam in Aswan. How do you explain the shift in Sudan’s position? In your view, has Egypt lost Sudan as a strong strategic partner in the Nile water issue?

Moghazi:  Egypt and Sudan are still cooperating on all issues related to the Nile waters through the Egyptian-Sudanese joint body tasked with the management of the Nile waters. This body convenes four times a year to discuss all matters related to water management for Lake Nasser, as well as flood management issues. This opportunity helps increase communication and consultation on any of the Nile waters projects between the two countries. Yet, the negotiations on the Renaissance Dam have become tripartite — between Egypt, Sudan and Ethiopia.

Al-Monitor:  Why has Cairo not been working to resolve the outstanding dispute with the Nile headwater countries concerning the Entebbe Agreement? Do you believe there is no future possibility to renegotiate a treaty that establishes the mechanisms for water management in the river’s basin?

Moghazi:  The talk on the Entebbe Agreement is out of the question at the moment. Egypt has already announced that it is ready to negotiate and exchange views on the pending clauses in the agreement, which are summarized with the prior notice, the unanimity condition in the decision making process, and the water security in exchange for historical quotas. We are waiting for any initiative in this regard by the Nile Basin countries, because this issue is not a priority for Egypt at present unless the initiative to resume dialogue [is] made, which would capture our attention and would be openly welcomed.

Al-Monitor:  The 1959 agreement between Egypt and Sudan identified an important path to increase Egypt’s share of Nile water through recovering water lost in the areas around the White Nile in South Sudan. Do you have a vision for implementing projects to increase Egypt’s share of water, especially in light of the expected threat that water flowing into Egypt from the Blue Nile will be reduced after the construction of the Renaissance Dam?

Moghazi:  There are bilateral cooperation projects with Uganda, Tanzania and South Sudan. We are also in the process of signing memoranda of understanding with Kenya, Rwanda, Burundi and Congo. This developmental cooperation focuses on building rainwater harvesting dams and cleaning up the waterways, by removing the grasses and Eichhornia from the outlets of Lake Victoria and expending the waterway. This project will undoubtedly reduce the Nile water losses.

We are also aspiring toward projects that would make use of water losses in South Sudan. Yet, the political situation, insecurity and instability are preventing their potential implementation. We are waiting for an opportunity to launch these projects.

Al-Monitor:  Does Cairo seek to convince South Sudan to resume works in building the Jonglei Canal, which was supposed to provide Egypt and Sudan with 12 billion cubic meters of water?

Moghazi:  The Jonglei Canal is located in an area facing wars and civil conflicts. We have already raised this issue with the water resources minister in South Sudan, yet he replied that approval depends on a stable security situation in the region. We don’t want members of any technical mission going to the region when it is facing security problems. I think that after the security situation stabilizes, this project will go forward and be subject to discussion with the political administration in South Sudan.

Al-Monitor:  The government is now adopting Sisi’s project to cultivate an additional 4 million feddans in Egypt, despite the limited nature of the country’s water resources. To what extent will Nile waters be relied upon in the cultivation of these lands?

Moghazi:  Eighty percent of the water needed for the project will be provided by groundwater, and to preserve aquifier reserves, water consumption and use regulations were adopted to avoid water waste and misuse. There are comprehensive feasibility studies for the project, which is part of the national projects to secure Egypt's food and sustainable development needs, and to confirm that the state is serious in finding a way out of the narrow valley to the vast desert.

Al-Monitor:  What is the water deficit in Egypt?

Al-Monitor:  What is your view of the dangers that climate change poses to Egypt, especially in terms of water, and what are your plans to deal with this issue?

Moghazi:  Climate change is a fact, [prompting] all of the world’s [leaders] to meet to discuss how to deal with it. Egypt is more vulnerable to climate change, and we have an integrated plan that is being implemented by the Water Resources and Irrigation Ministry at several levels. This is true particularly following the series of unexpected flooding in some areas of the Nile Delta, where measures were taken as part of an urgent plan to deal with the floods in the Sinai, the West Delta and some of the Upper Egypt provinces. In this context, wastewater networks and water-pumping stations were reinforced.

We are also working on protecting the Egyptian coastline from large waves and sea level rise. Seawalls were built in areas subject to erosion. At present, there is a project to build a 2-kilometer-long seawall at a cost of 200 million Egyptian pounds. Work will commence at the site as soon as the rainy season ends.