Representatives of the Egyptian Ministry of Water and Irrigation visited Ethiopia's in-progress Renaissance Dam to verify no water is being stored there yet, but anxiety continues over an overdue technical report on the project's impacts. 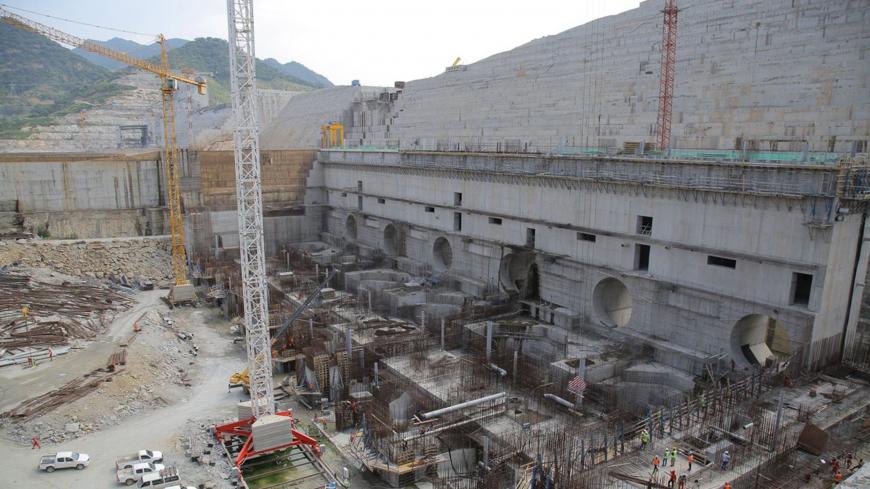 The Renaissance Dam is pictured under construction in the Benishangul-Gumuz region of Ethiopia in this image shared over Twitter, Oct. 17, 2017. - Ethiopian Ministry of Foreign Affairs

CAIRO — The Egyptian Ministry of Water and Irrigation announced in an Oct. 18 press statement that an Egyptian delegation had verified that no water is yet stored in the Renaissance Dam and that there is nothing obstructing the Nile. The statement followed the Oct. 17 visit of the group, headed by Minister of Water and Irrigation Mohamed Abdel Aty, to the Renaissance Dam in Ethiopia near the Sudanese border. It was the first visit of its kind by an Egyptian state official.

Atiya Issawi, who covers African affairs for Al-Ahram newspaper, said that the visit was intended to dispel Egyptian doubts about the Renaissance Dam amid the faltering negotiations and Ethiopia’s moving forward on its construction. He told Al-Monitor, “The Ethiopian government’s invitation to Egypt and its technical delegation to visit the dam shows that tensions between the two countries have eased, relatively,” adding that the Ethiopian move was meant to convey good will.

Egypt is concerned about the dam's potential negative effects on its water share of the Nile River (55.5 billion cubic meters annually, as stipulated in the 1929 and 1959 agreements), especially while the dam is being filled. Ethiopia has not announced a start date for that stage, but it is expected to begin in early 2018. The dam will have a storage capacity of 74 billion cubic meters, equal to the annual shares of Egypt and Sudan combined.

Ethiopia is still building the dam it started working on in April 2011. The goal is to generate more than 6,450 megawatts of hydroelectric power, the biggest hydroelectric project in Africa, at a cost of $4.2 billion.

Ethiopian Deputy Prime Minister Debretsion Gebremichael announced Oct. 18 that 62% of the dam's construction has been completed. Gebremichael told the official Ethiopian news agency that the dam will begin generating electric power during the current Ethiopian calendar year, which began Sept. 11, 2017, and will end Oct. 1, 2018.

Filling and operating the Renaissance Dam without affecting the downstream countries remain topics of dispute. The tripartite technical committee formed of 12 experts from the three countries held 16 rounds of negotiations, the most recent on Oct. 18 in Addis Ababa. But the meeting failed to resolve the dispute between the three countries, which agreed to convene early November in Cairo to continue the negotiations.

On Sept. 20, 2016, the tripartite committee had signed contracts with French consultancy firms BRL and Artelia to prepare a technical study on the Renaissance dam and its impacts.

The technical study was supposed to be finalized and submitted in August 2017, as specified by the declaration of principles on sharing Nile River water signed by Egyptian President Abdel Fattah al-Sisi, Sudanese President Omar al-Bashir and Ethiopian Prime Minister Hailemariam Desalegn on March 23, 2015, and the subsequent signing of the Khartoum document in December 2015. The agreements also allotted four additional months for the members of the tripartite technical committee to agree on ways to implement the results. But the finalization of the study has been stalled by the ongoing dispute between the three concerned countries.

During a meeting with his Ethiopian counterpart Workneh Gebeyehu on the sidelines of the UN General Assembly meeting Sept. 21, Egyptian Minister of Foreign Affairs Sameh Shukri talked about a “stagnation of negotiations” among the tripartite technical committee and said that the release of the technical study had been delayed. Sisi said in his speech before the UN General Assembly Sept. 19, “The quick implementation of the declaration of principles reached in March 2015 is pressing.”

Cairo fears its agricultural lands will be affected while the dam fills and that the process might impede its desert reclamation project, adding further pressure on its 100 million people who are already suffering from water shortages. The Nile provides more than 90% of Egypt's water.

On Oct. 2, the Associated Press cited a source at the Egyptian Ministry of Irrigation as saying on condition of anonymity that the government’s studies estimated Egypt will lose 200,000 acres of agricultural land with each billion cubic meters of water it loses from its share.

Shukri said in an interview published Oct. 4 by Egypt's Al-Ahram newspaper that the three countries could not overcome some technical and political obstacles that stand in the way of releasing the technical study. He added, “These obstacles threaten the foundations of the declaration of principles.”

Shukri noted that by failing to complete the technical study before finishing the construction of the dam and starting to store water in it, Ethiopia is giving off the impression of purposely stalling for its own benefit.

Issawi noted that "Ethiopia wants to present Egypt with a fait accompli by [rushing] to complete the dam. It is thus ignoring Egypt’s comments on the construction in the hope that it will only have to negotiate the details of filling the dam’s reservoir and its operation, in a way that takes into account dams in Egypt and Sudan, so that they are coordinated [and do not block flow at the same time]."

Issawi expects the three countries to reach a solution during the meeting of the technical committee in early November, and it will in some form be at the expense of Egypt. He said, “Egypt will not come out unscathed.”

Ayman Shabana, a professor of political science at the Institute of African Studies and Research affiliated with Cairo University, said that Egypt should internationalize the crisis by submitting an official objection before the UN Security Council against Ethiopia. Shabana told Al-Monitor, “Egypt can invoke Saudi Arabia, the UAE and Kuwait to play the role of mediators and bring perspectives closer in the crisis.”

He added, “Saudi Arabia, the UAE and Kuwait have good relations with Egypt now and can pressure Ethiopia to reach a solution that would end the disputes. These Gulf countries have huge economic influence on Ethiopia.”