It's one Renaissance Dam thing after another

Ethiopia has rejected Egypt's suggestion to get the World Bank involved in so far unsuccessful negotiations over the Grand Ethiopian Renaissance Dam on the Nile River. 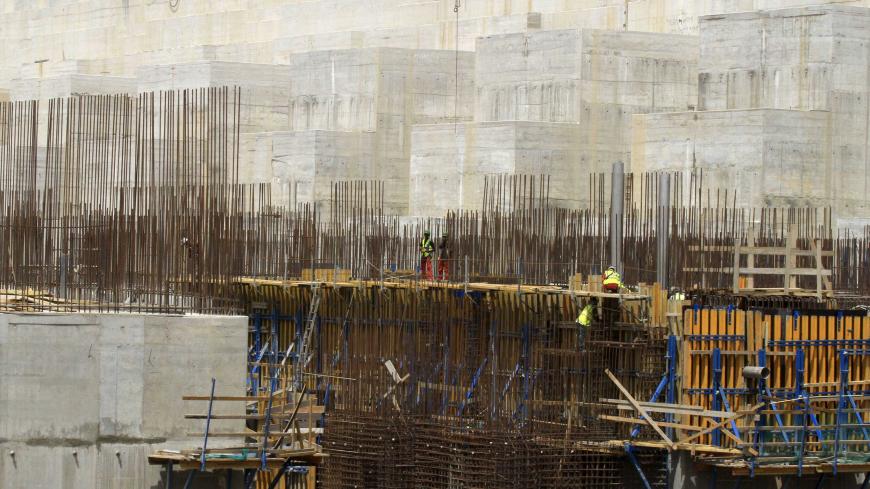 CAIRO — Recent talks between Egypt and Ethiopia ended with no progress — as have many meetings before — on their controversial dam project with Sudan. The repeated failures have left at least some officials wondering if there's hope for the future.

Before the Jan. 17-19 meetings in Cairo officially began, the atmosphere was positive. Several memorandums of understanding were signed during the visit to promote cooperation in industry, diplomacy and politics. Ethiopian Prime Minister Hailemariam Desalegn suggested the presidents of all three countries involved in the dam project should also hold a summit at the end of January on the sidelines of the African Union summit Jan. 28-29. Egyptian Foreign Affairs Minister Sameh Shoukry offered encouraging words about negotiations on the Grand Ethiopian Renaissance Dam, saying, “Egypt has the political desire to overcome all obstacles that might hamper the development of bilateral relations."

But that was before Desalegn decided, a few days after returning home, to reject Egypt's proposal to bring the World Bank into long-stalled negotiations as a technical mediator. Upon hearing of the rebuff, Shoukry's spokesman said on TV, “Ethiopia’s refusal of the Egyptian proposition … raises questions about the [potential for] success of a tripartite summit" with Sudan.

Cairo believes the Renaissance Dam project on the Nile River could threaten Egypt's water supply and harm the environment.

The Cairo talks included Egyptian President Abdel Fattah al-Sisi, Desalegn and Ethiopian Foreign Minister Workneh Gebeyehu. Just before the visit started, Desalegn’s scheduled speech before the Egyptian parliament was canceled, and meetings that Ethiopia had requested with Coptic Orthodox Church Pope Tawadros II and Al-Azhar University’s Sheikh Ahmed al-Tayeb could not be held. Officials of both countries offered various explanations. The visit was restricted to official deliberations between Desalegn and Sisi, in addition to a meeting with Egyptian businessmen to discuss potential investment in Ethiopia and Egyptian investors’ role in supporting the Ethiopian economy.

A diplomatic expert on Nile water matters told Al-Monitor on condition of anonymity, “The deliberations between Sisi and Desalegn focused primarily on filling the dam reservoir, which is the most pressing issue that the leaders should resolve. Most estimates expect the filling process to begin with the flooding season in July.”

However, the two countries have yet to agree on the timing, as well as basic technical issues regarding operation of the $4.8 billion dam. Ethiopia has already completed more than 60% of the construction.

The expert added, “The deliberations did not conclusively settle the technical dispute. Egypt’s request to include the World Bank as a [moderator] in the current disputes caused a stir. Ethiopia objected to the World Bank’s involvement, claiming that resorting to its services does not stem from its expertise, but from a desire to move the dispute to international platforms.”

He noted, “Despite Sisi’s attempts to clarify the Egyptian point of view, Ethiopia suggested the participation of other regional parties such as the African Union. But Egypt strictly rejected [that option], to avoid politicizing the technical issues and stalling further.” Egypt believes that the World Bank, as an international, neutral and professional organization, is the best option for solving the dispute.

Desalegn attempted to put a positive spin on the meetings' outcome. In statements published by the Ethiopian news agency, he asserted that the visit to Cairo was successful. Yet some of Sisi's comments during a joint press conference following the Jan. 18 deliberations reflected Cairo’s concerns about a failure to reach conclusive results.

During the press conference, which several Egyptian ministers attended, including Minister of Defense Sedki Sobhi, Sisi said, “The Nile Basin situation cannot be a zero-sum game or of unilateral benefit.” He added that Egypt is worried about the stagnation of the process to complete studies that were commissioned to determine any damaging social and environmental effects of the dam on downstream countries such as Egypt and Sudan, and ways to avoid such effects.

Ethiopian officials have said they are keeping Egypt's best interests in mind and would not do anything to harm the country. But Sobhi said, “The best way for Ethiopia to guarantee its commitment not to harm Egypt’s interests is through completing the requested studies and abiding by their results.”

A Declaration of Principles — which the presidents of Egypt, Sudan and Ethiopia signed in March 2015 — outlines a three-step process: The countries were to commission the technical and environmental impact studies; the studies were to be completed within 11 months; and then the participants were to have four more months to examine the results and reach a consensus on how to proceed with the first filling and operation of the dam.

The research began in September 2016. Yet the parties are still arguing over the basic introductory technical report, with officials unable to agree even on which scenarios to study. Because of the extended disputes, Egypt called off the technical deliberations in November.

Sisi has said since then, "Resuming the studies is the condition [Ethiopia must meet] to begin filling the reservoir and to determine its annual operation mechanism, as per the Declaration of Principles. We will not accept any unilateral behavior in this regard."