While the recent round of negotiations on Ethiopia's Renaissance Dam ended with a new document aimed at entrenching cooperation between Egypt, Sudan and Ethiopia, it did not resolve the differences over the water filling and dam operation process. 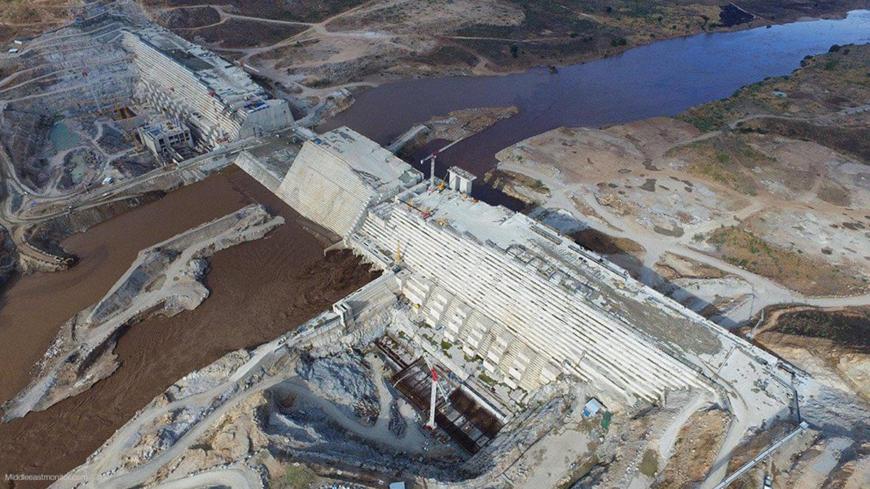 Negotiations between Egypt, Ethiopia and Sudan over the Grand Ethiopian Renaissance Dam ended on May 15 in Addis Ababa. Posted April 2, 2018. - Twitter/@PositivelyEthio

CAIRO — In an effort to break the stalemate between Egypt, Ethiopia and Sudan over the Grand Ethiopian Renaissance Dam, the round of negotiations held between the three countries' foreign ministers, irrigation and water ministers, and heads of intelligence ended May 15 in Addis Ababa with the signing of a document containing five clauses.

The aim of the document is to create a new road map that would avoid procrastination and have the three countries renew their pledge to cooperate in accordance with the Declaration of Principles signed in March 2015.

However, while the document was issued after 16 hours of back-to-back meetings, it failed to resolve the fundamental differences between Egypt and Ethiopia over the technical studies aimed at determining the negative effects of the dam on Egypt. It also failed to reach an agreement over a storage and operation mechanism in the dam that would avoid causing severe damage to Cairo.

Yet still, Egyptian Foreign Minister Sameh Shoukry said the document was a success. “We have set a course to break the deadlock, and I trust that sincerity will lead to the conclusion of technical studies that will be of benefit to the three countries,” he said during a press conference following the signing of the document.

Shoukry was referring to the deadlock that emanated from the last round of talks between the three countries and that led them to exchange media accusations.

The document stipulates five clauses, the first of which provides for holding a tripartite summit between Egypt, Ethiopia and Sudan every six months. The second clause stipulates the establishment of a tripartite infrastructure fund. And while the third and fourth clauses failed to resolve differences based on technical studies, they said that the two French consultancy firms chosen by the three countries shall submit to the Technical National Committee within three weeks a proposal regarding these technical studies based on a compilation of queries and observations made by each country. This proposal shall be deliberated during another round of discussions held June 16 among the nine parties in Cairo.

The fifth clause provides for the establishment of a national independent scientific research study group tasked with discussing and developing various scenarios related to the filling and operation rules of the dam in accordance with the principle of equitable and reasonable utilization of shared water sources while taking all of the appropriate measures to prevent the causing of serious harm to Egypt and Sudan. The document says that this group shall submit the outcome of its deliberations within three months to the water ministers of the three countries.

This document is to be added to a number of documents signed by the three countries regarding the Renaissance Dam ever since a report issued by the International Committee of Experts in May 2013 stressed the importance of studying the environmental, economic and social impact of the dam on downstream countries. Examples of such documents include the Declaration of Principles signed by the presidents of the three countries in March 2015 and the document of the Khartoum meeting signed in December 2015.

Of note, the Khartoum document set timetables for the completion of studies and for reaching an agreement on the filling and operation rules of the dam within a maximum period of one year. However, disagreements over technical details prevented the implementation of any of the commitments stipulated by these documents.

The main differences lie in the obstructed technical studies conducted by the French consulting firms BRL and Artelia, one and a half years following the signing of the contracts for the assessment studies by the three water ministers in September 2016. This is due to Ethiopia and Sudan's rejection of the consultancy firms’ inception report and attempts on the part of Ethiopia and Sudan to introduce amendments that would invalidate the studies, as per a statement by the Egyptian Ministry of Irrigation in November 2017.

Of note, Egypt agreed on the inception report as it was in line with the contracts for the assessment studies, but Sudan and Ethiopia rejected it.

Also, there are differences that emanate from the reference that should be used in the studies. For example, Cairo believes that the studies should strictly follow the wording of the contracts, which use as a reference the current water status in the Eastern Nile, including the area behind the Aswan High Dam up until the Nile Delta.

Meanwhile, Ethiopia awaits the upcoming rainy season that begins in July in order to start storing water, complete the construction process at the Renaissance Dam site, conduct safety tests and start operating power turbines. The initial amount of stored water is estimated at 14 billion cubic meters of water, which is the volume of water that the dam will prevent from reaching Egypt and Sudan.

An Egyptian official who participated in the meetings told Al-Monitor on condition of anonymity, “The main determinant of the success of this round will be the implementation of the terms stipulated by the meeting’s document, respecting the deadlines for resolving the dispute over the inception report of the consultancy offices’ studies and developing consensual scenarios for water storage in the dam.”

The source said that “the document is not a radical solution to the existing differences over the inception report or the filling and operation rules of the dam. However, the continuation of the dispute after the failure of the round of negotiations in April almost threatened the Egyptian interests in the Nile waters, especially with the beginning of the storage operations in Ethiopia, the continued intransigence against any proposals put forth by Egypt to push for the completion of the technical studies of the effects of the dam and the inability to accept the Ethiopian individual plan to fill the reservoir dam.”

“Breaking out of the circle of dispute by working on new areas of cooperation that would achieve common interests such as the tripartite infrastructure fund is a new policy adopted by Cairo. This policy shows great flexibility in the context of policies aimed at securing interests in the eastern Nile and protecting the annual share of Nile water against any individual and intransigent decisions,” the source said.

Although observers expected these negotiations to achieve a breakthrough and agree on outstanding points, the outcome of the meetings held in Khartoum on April 5 and Addis Ababa on May 15 failed to produce specific results that would prove the negative effects of the dam on Egypt and prevent any serious harm resulting from the filling and dam operation process.

According to international law, advance notification is required from Ethiopia before engaging in any construction process that could harm the downstream countries. However, Ethiopia started building the Renaissance Dam in 2011, thus sparking a long conflict with Egypt over the dam and its impact on the Egyptian share of the Nile water.

Egypt, Ethiopia and Sudan failed to give a mandatory status to the report that will be issued by the new scientific group that will develop several filling scenarios. In other words, the work of this team will merely serve as a suggestion.