The Ethiopian government has released its plan for filling the reservoir of the Great Ethiopian Renaissance Dam, but Cairo is balking due to stalled technical and impact studies. 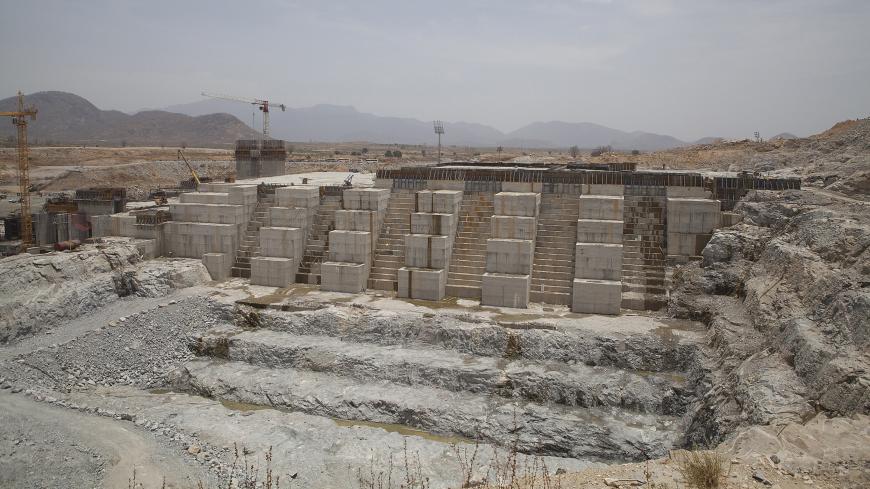 CAIRO — Abdel Mahmoud Abdel Halim, Sudan's ambassador to Egypt, issued an invitation on March 13 to the Egyptian government for an April 4-5 tripartite meeting, along with Ethiopia, to discuss the filling of the Grand Ethiopian Renaissance Dam (GERD) reservoir. The invitation was extended to foreign affairs and irrigation ministers as well as, for the first time, security and intelligence officials.

The Ethiopian government had formally handed over to Egypt and Sudan in mid-February its unilateral plan for filling the dam reservoir amid stalled technical and political talks with Egypt and Sudan. So far, disagreements have hindered studies on the dam's impact and all three states have failed to agree on issues involving filling and operating the dam.

Gedion Asfaw, head of the Ethiopian team to the Tripartite National Committee (TNC), told Al-Monitor, “The [filling] plan was sent in an official letter from the Ethiopian minister of water to Egypt, and we will not stop providing information and disclosing our plan. We have asked for a meeting of [TNC] technicians to find the best solution, so as not to cause serious damage.”

Egypt, Sudan and Ethiopia suspended technical talks in November 2017 after failing to reach agreement on the inception report for assessing the hydrological, environmental and economic impacts of the mega project on the downstream countries. The consultants BRL and Artelia received the contracts for the assessment studies.

Both Sudan and Ethiopia rejected the boundaries for measuring the dam’s impacts proposed in the consultants' inception report and called for amendments to it. The report established them as the area from the dam site in Ethiopia to the Nile Delta at the Mediterranean Sea in Egypt, but Sudan and Ethiopia want the assessments to extend only from the GERD to the Aswan High Dam. Egypt objects to any amendments. Egyptian studies indicate that the dam will have negative impacts on the Delta, one being higher soil salinity, and therefore Cairo is demanding a broader assessment zone.

On the differences that halted the technical talks, Asfaw said, “The TNC experts had to comment on the inception report, but Egypt, which did not make any comment, rejected the comments of Ethiopia and Sudan.” He further explained, “In our comments, we emphasized the need for the consultants to abide by the contracts signed in September 2016. We also proposed various filling scenarios according to the flood or drought situation along the river, taking into account the concerns of Egypt, Sudan and Ethiopia.”

Asfaw continued, “Issues such as the effect of the dam on soil salinity in the Nile Delta in Egypt are not included in the transboundary impact assessment systems agreed upon in the contracts signed with the consultants. There are, however, other points that were agreed upon, such as the impact on agriculture and lands irrigated by the Nile waters in the downstream countries.”

Affirming Egypt's stance on Ethiopia's plan for filling the reservoir, an Egyptian government official requesting anonymity and knowledgeable on Nile Basin affairs told Al-Monitor, “Egypt remains committed to the Declaration of Principles on the GERD, which is the only official document governing Egypt’s relationship with Ethiopia on this issue.”

Principle V of the declaration, signed in March 2015, states, “The three countries, in the spirit of cooperation, will utilize the final outcomes of the joint studies, to be conducted as per the recommendations of the International Panel of Experts Report and agreed upon by the TNC, to: a) Agree on guidelines and rules on the first filling of GERD which shall cover all different scenarios, in parallel with the construction of GERD.”

“There will be no official response to the Ethiopian plan at the moment,” the Egyptian official said. “The meeting of foreign ministers, ministers of irrigation and intelligence chiefs should move forward on the studies that Cairo sees as the only way to prove in an impartial manner the GERD’s impact.”

Rawia Tawfik, assistant professor at the Faculty of Economics and Political Science at Cairo University and researcher at the German Development Institute, told Al-Monitor, “The unilateral move by Ethiopia undermines the Declaration of Principles and the defined track for setting the rules on the GERD filling and operation.” She explained that the agreement on filling and operation rules must be discussed jointly. “The filling plan cannot be submitted by one party,” Tawfik emphasized.

“The letter [by being sent] may mean that Ethiopia has no intention of talking about compensation. In the filling plan it submitted, it is not clear whether Ethiopia will address any damage to the two downstream states during the GERD filling and operation periods.”

“Questions have been raised about the Renaissance Dam operational levels, on which evaporation, losses and leakage volumes depend,” Abu-Zeid said. “Filling the Renaissance Dam leads to a large amount of evaporation and leakage, whose cumulative effect would reduce water storage in Lake Nasser in Egypt. This would affect the safe storage level in Lake Nasser, which Egypt relies on to meet its needs in times of drought and low flood rates.”

Cairo is pushing for a joint agreement with Ethiopia on filling the GERD reservoir and operating it in a way that does not affect its Nile waters interests. Ethiopia, however, by informing Egypt of its reservoir-filling plan, seems to be one step ahead and has been steadily arguing a lack of impediments to launching the filling operation.

“Construction at the GERD site and the filling of the reservoir form an integrated process and will not stop,” said Ethiopian Water and Energy Minister Seleshi Bekele at a press conference Feb. 21.